Where Stars Are Born: Celebrating the CFC and Its Actors at the 2019 Annual Gala and Auction

The Annual Gala and Auction represent CFC’s largest fundraiser. Through the generous support of our guests – industry luminaries, philanthropists, and CFC donors and sponsors – we raised funds for our renowned programs and initiatives in film, TV, screen acting, screen composing and songwriting, and digital media. 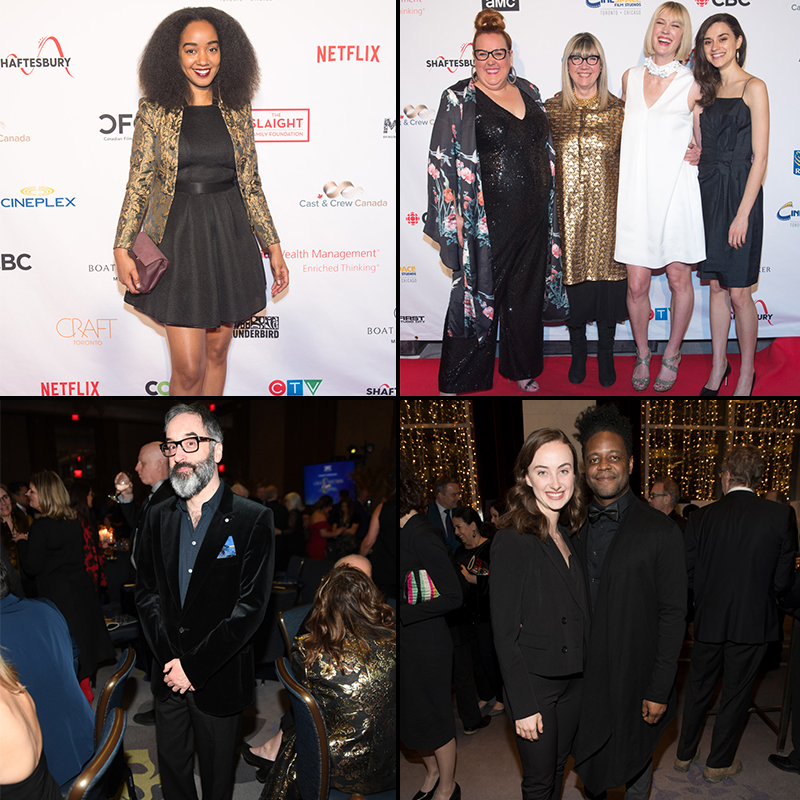 This year’s Gala celebrated 10 years of the CFC’s actors. The program, known since 2016 as the
CBC Actors Conservatory, has produced 81 exceptional alumni and is the only comprehensive, professional on-camera acting program in North America. From the CFC, our actor-alumni have gone on to leading roles, gracing screens around the world. They inspire and animate content, making the stories we tell memorable and building both the CFC and Canada’s reputation worldwide as a vital hub of talent. 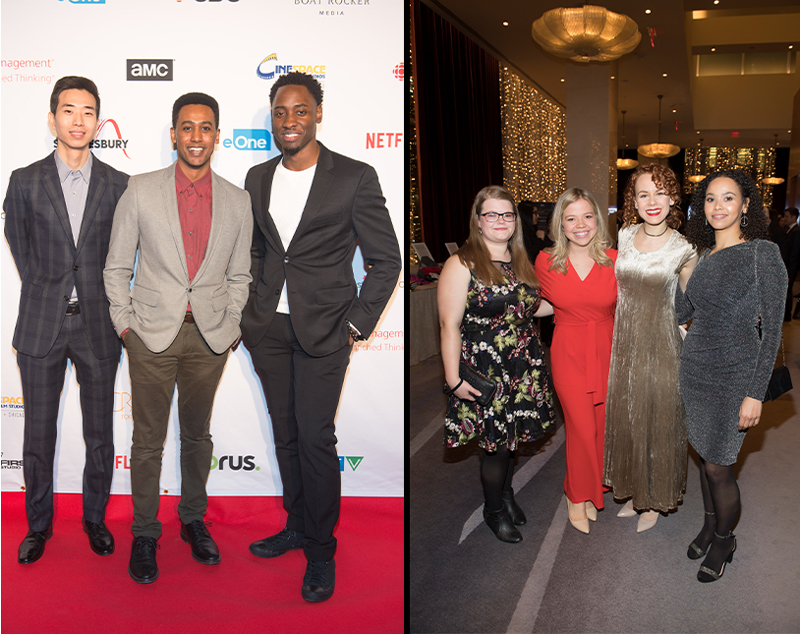 The evening kicked off with an AMC-sponsored cocktail reception, held in the wide-windowed Grand Foyer. After hitting the red carpet and Toronto Life augmented reality photo booth, guests chatted and networked with friends old and new, as well as took in the silent auction – luxury items and bespoke, priceless experiences. 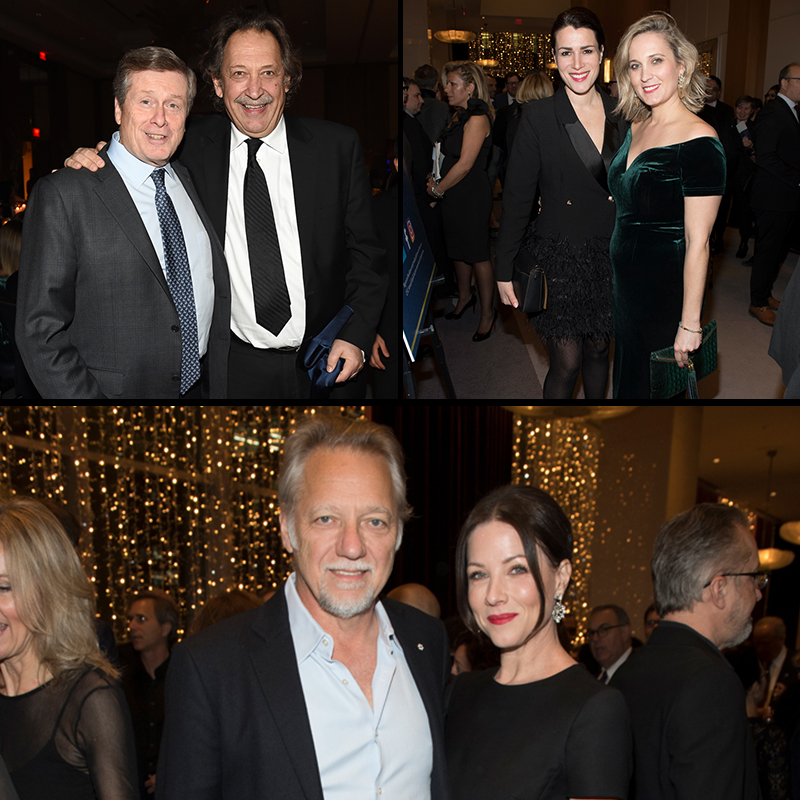 Next, everyone was ushered into the Grand Ballroom for dinner. The Ballroom’s décor of golden palm fronds, candlelit-centrepieces, and enormous glistening chandeliers like dragonfly wings evoked an exquisite ambience for the soiree. 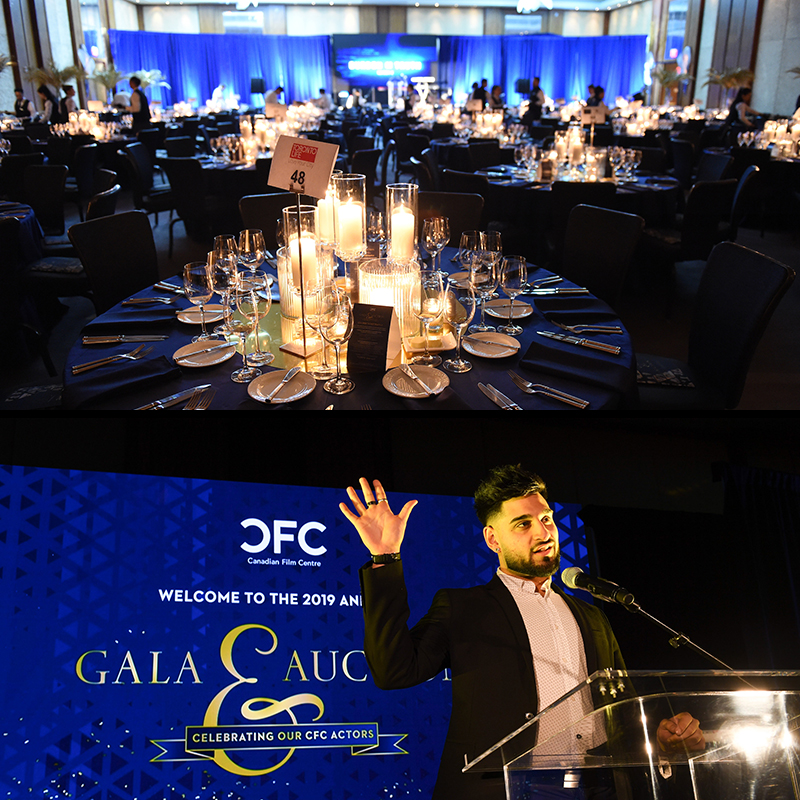 Performer Wali Shah hushed the crowd for a welcome message that paid tribute to the CFC – and flowed into a heartwarming toast from our Founder and Chair Emeritus, Norman Jewison. From there, guests were treated to a moving tribute to CFC talent, a montage of all 81 of our actors in touching and inspiring onscreen scenes.

Evening co-hosts Christina Jennings, Chair of CFC’s Board of Directors and CEO, Shaftesbury, and Slawko Klymkiw, CEO, CFC, then took to the stage to welcome attendees and emcee the night’s festivities. Klymkiw noted that “our actors inspire and animate Canadian content, making the stories we tell memorable, and bringing Canadian talent onto a global stage.” 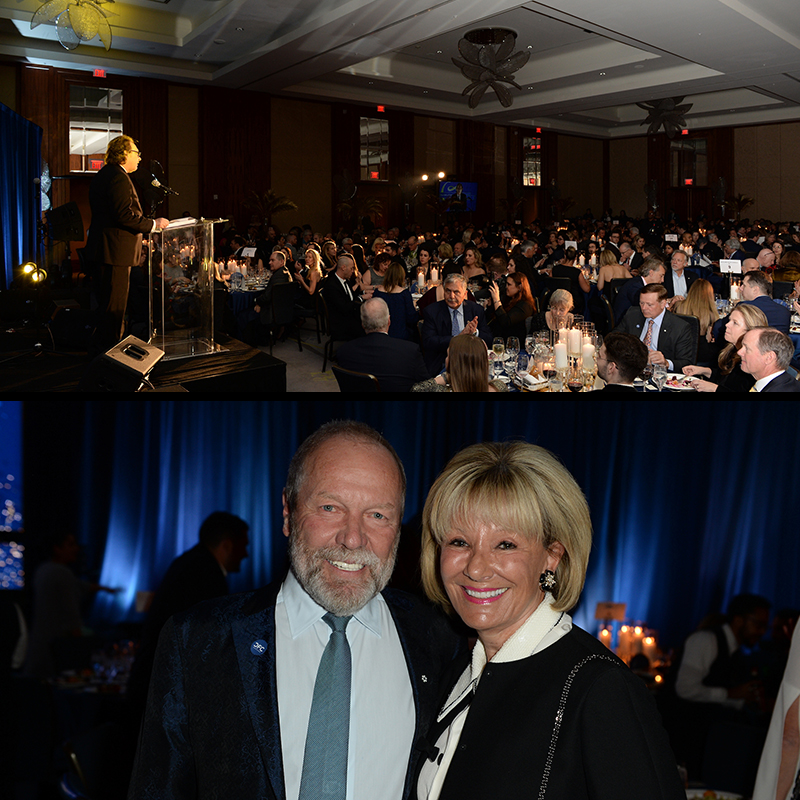 Klymkiw continued, adding that “this year, more than 60 CFC alumni are up for Canadian Screen Awards for their work on projects and productions, and one of our most recent alumnus from the Cineplex Film Program Producers’ Lab, Evren Boisjoili, was the producer for
Fauve, nominated for Best Live Action Short Film at this year’s Oscars.”

The co-hosts also added special thanks on behalf of the wider CFC: to presenting sponsors Netflix and The Slaight Family Foundation; to title sponsor CBC, as well as the Government of Ontario, The Brian Linehan Charitable Foundation and RBC Emerging Artists Project for their continued support of the Actors Conservatory; and to special guests Vincent Ke, Parliamentary Assistant to the Minister of Tourism, Culture and Sport, Mayor John Tory, Councillor Jaye Robinson, and Mayor Frank Scarpitti. 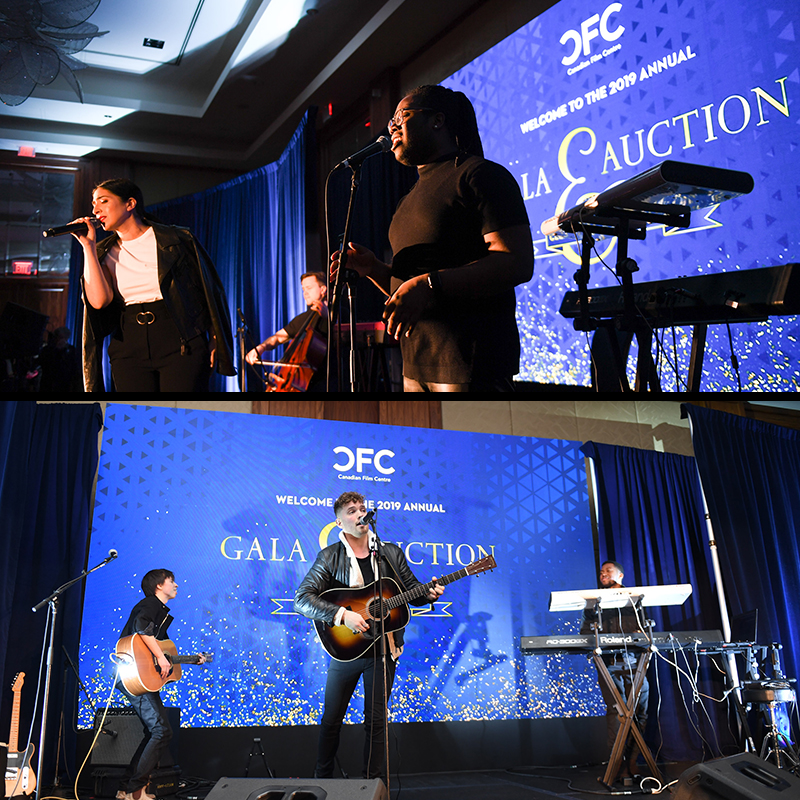 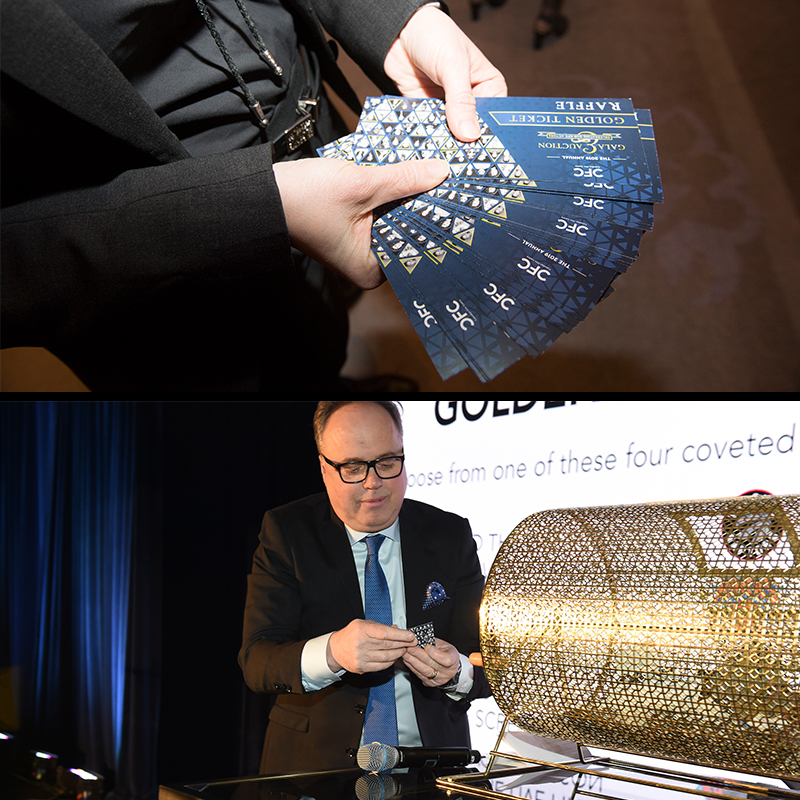 After the delectable dinner (a choice of fall-off-the-bone brisket or aromatic mushroom risotto), one of the evening’s highlights commenced – the announcement of the winning Golden Ticket! This year, instead of diving straight into the Live Auction with beloved Guest Auctioneer Stephen Ranger, one lucky person drew the winning raffle ticket to select one of four Live Auction packages before bidding began – in this case, the winner selected being flown out to Los Angeles for a two-night stay and prime seat at the sure-to-be-unforgettable Season 16 finale of The Voice.

Fast and furious bidding ensued on the other Live Auction packages, and after, guests returned to the Grand Foyer to enjoy coffee, fine teas, and a spread of picture-perfect desserts at the dessert bar. Guests were able to put in their last-minute bids on the silent auction while sampling light and fluffy meringues. 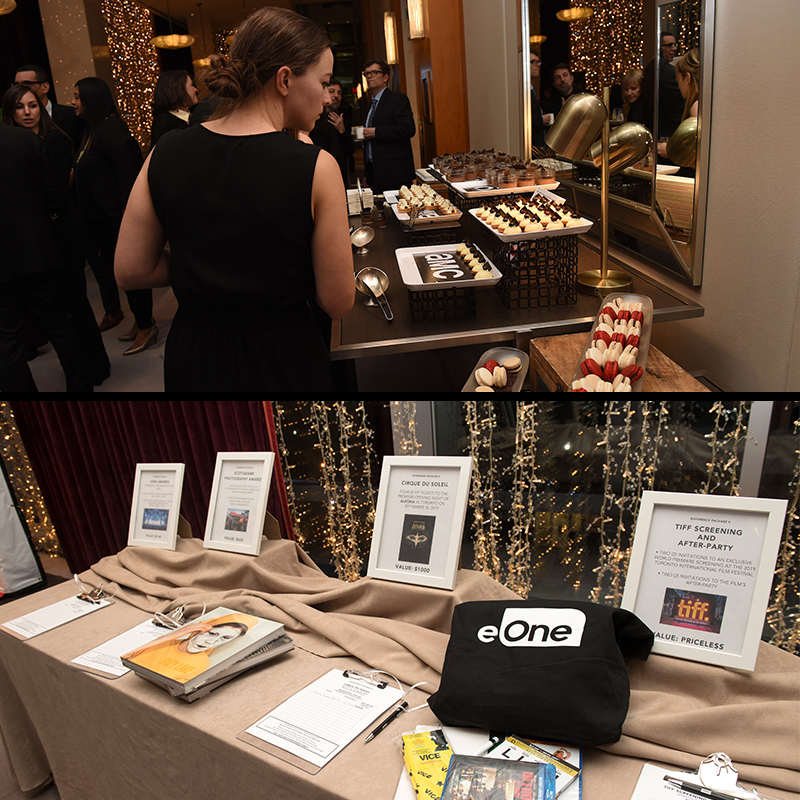 Then it was time to guests to share their fond farewells until the next CFC event. As most in attendance would concur, the evening afforded a glamorous setting for celebrating the CFC’s talent, a home for nurturing Canadian talent across the screen entertainment spectrum.

Thank you to our sponsors, donors, gala guests and volunteers below who contributed to making the 2019 CFC Annual Gala & Auction possible. Your support enables us to inspire the next generation of world-class filmmakers, TV writers, actors, composers, songwriters and digital media entrepreneurs to go beyond barriers, beyond borders and beyond expectations.

Enjoy the evening’s magic once more in this photo gallery.