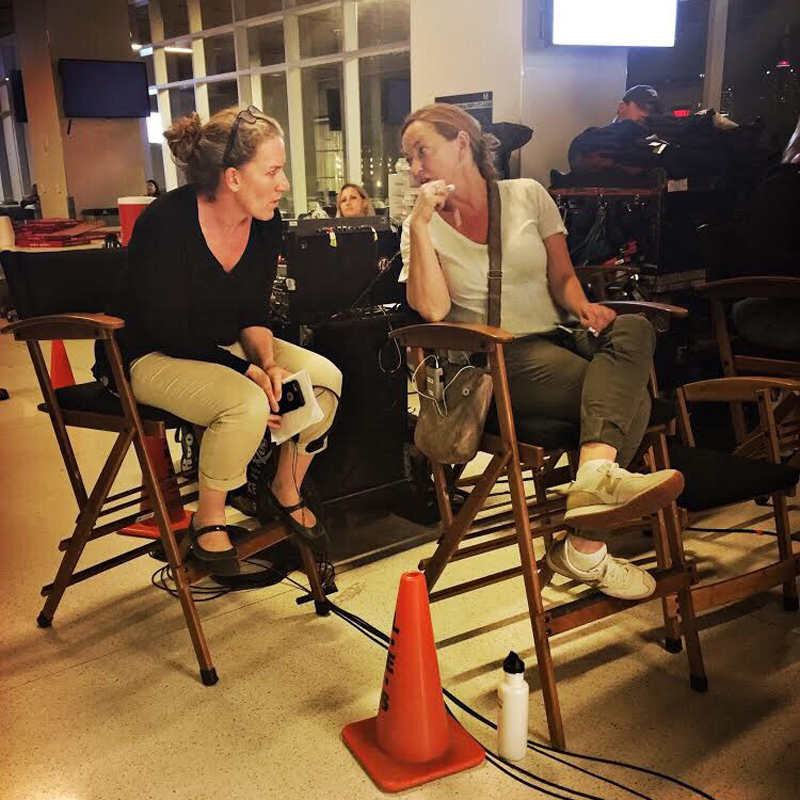 Amy and Tassie Cameron on set.

This year’s recipients of the CFC Award for Creative Excellence are two remarkable, inspiring and collaborative creator-alumnae sisters,
Amy Cameron and Tassie Cameron. Their individual accomplishments are noteworthy, visible in more detail below. Together they are a force, using their collective clout and experience to back exciting creators making fresh, original work. What connects their projects is an astute attention to quality, not just to the stories they select and produce, but also to the entire storytelling process, from idea to execution.

Amy Cameron is an award-winning journalist, author, TV series creator/showrunner and broadcast executive. She wrote for publications such as
Maclean’s, The Globe and Mail, Chatelaine, Owl and The Presbyterian Record; contributed to different programs on CBC Radio; and won several Atlantic Journalism Awards for her first job as the arts, crime and aboriginal affairs reporter for New Brunswick’s provincial daily newspaper, the Telegraph Journal. Her first TV concept, Wild Roses, went straight to series at CBC. She then became an executive in charge of production in the comedy department at CBC, where she worked on Little Mosque on the Prairie, and then in the drama department, where she oversaw internationally acclaimed shows such as Heartland, Republic of Doyle and The Book of Negroes.

A critically acclaimed writer and showrunner, Tassie Cameron is a multiple Gemini and Canadian Screen Award (CSA) nominee and winner. She is also the recipient of the distinguished CSA Margaret Collier Award and the Writers Guild of Canada (WGC) Showrunner Award. Some of her credits are the feature film,
Cake, starring Taye Diggs and Heather Graham (which she developed during her time in the Cineplex Film Program’s Writers’ Lab); a feature film adaptation of Margaret Atwood’s novel, The Robber Bride; executive producer of the CTV miniseries, Would be Kings; executive producer on series such as Private Eyes and the upcoming Nurses; co-executive producer on Flashpoint; she created the series, Ten Days in the Valley, starring Kyra Sedgwick, and co-created/executive-produced the long-running series, Rookie Blue.

In 2016, they formed Cameron Pictures, first with their hit series
Mary Kills People for Global (Canada) and Lifetime (U.S.; first two seasons), followed by the CBC comedy Little Dog, which just began its second season on CBC – as well as a fast-growing development slate of exciting new projects coming up.

The annual
CFC Award for Creative Excellence honours CFC alumni who have made significant creative and entrepreneurial contributions to the international screen-based entertainment industry. The Camerons display both an individual and collective commitment to creative excellence; a high level of integrity in their work; an abiding dedication to supporting original and distinctive voices; and a deep commitment to collaboration, including with the CFC itself, where they now serve as mentors and special guests. They both embody many of the qualities and values espoused by the CFC, so we are especially pleased to honour them with this award.

Amy and Tassie Cameron will receive this award at an invitation-only event in Los Angeles this March, where they will join previous honourees Semi Chellas (2014), Graeme Manson and John Fawcett (2015), Don McKellar (2016), Damon D’Oliveira and Clement Virgo (2017), and Christina Jennings (2018).

Read on to learn more about the Camerons. Below, they share some of their career twists, turns and highlights, including the impact of the CFC on their work and drive to collaborate, not compete.

Both Amy and Tassie Cameron attended the Cineplex Film Program Writers’ Lab, but traveled to it via different routes. After Tassie received her masters in cinema studies from New York University, she did a range of film and television jobs in New York, moving from PA to HBO’s manager of postproduction for their feature film division.

Despite her success, she wasn’t doing what she really wanted – writing. In 1999, her friend and CFC alumna,
Miranda de Pencier, encouraged her to write a script and apply to the CFC. Tassie got in and moved to Toronto. “The CFC was my start as a writer. From then on, I was lucky enough to keep working. My first real job was on the reboot of Degrassi, and then the CBC show Tom Stone for two years. That was followed by The Eleventh Hour and Rookie Blue. I’ve been working steadily in television since the CFC.”

Amy studied fine arts at Concordia and followed their mother, Stevie Cameron, into journalism, but regular gigs were drying up. In 2006, Tassie suggested Amy pursue screenwriting, so Amy also wrote a script and got in. She left the CFC with a successful pilot deal with CBC, a series she co-created with de Pencier and Tassie that became
Wild Roses and ran for one season.

“As wonderful as that deal was,” Amy adds, “It threw me off. Because I’d created a show that got an order, I was no longer considered a junior. Yet I also had no experience, so I couldn’t be a senior.” Then the CBC invited her to take an executive position in their comedy department, which ushered her into broadcasting, first comedy and then drama.

In April 2016, they formed Cameron Pictures. At the time, Tassie thought, “It’s common for writers to start thinking about producing, to want more agency and control over their projects. I’d been contemplating this move for a while, consulting on various projects, and thought it would be wonderful to have more ownership of my projects.

“Amy and I are best friends and she’s the best producer I know. Truly. I thought, If we’re going to take a risk, there’s nobody I trust more, nobody I know who would protect me and our ideas more passionately.“

Amy hesitated at first, but admitted that she “loved the idea of working with Tassie,” adding, “No one but my sister could have torn me away from my great team at the CBC. Also, the things that terrify me the most are usually the things I know I should do!”

“When people ask, ‘What’s it like working with your sister?’ I say, ‘I am my best self with Tassie.’ It’s nice to work with someone you trust absolutely and who brings out the best in you. I feel very lucky to have this partnership.“

They formed Cameron Pictures in 2016 to produce
Mary Kills People, in partnership with eOne for Global in Canada and Lifetime in the U.S. – a series first developed by Bell Media Prime Time TV Program alumna Tara Armstrong at the CFC.

Tassie served as its first showrunner, until Tara Armstrong took over for the second season. Now Tassie is co-showrunning the final season with alumna
Marsha Greene. Mary follows Dr. Mary Harris (Caroline Dhavernas), a single mother and emergency room doctor who moonlights by helping terminally ill patients die on their own terms. The third and final season is set to air this spring.

Partnering with eOne on
Mary also enabled the Camerons to concentrate more on the creative side, with eOne fielding business elements, helping to make this a successful first production for Cameron Pictures.

The Role of the CFC

The Camerons often recommend people go to the CFC, given its impact on their careers. As Amy reflects, “The CFC feels like summer camp for writers. You nerd out with other writers, dive into the idea of story and character and world-building with people who care about your characters as much as you do – wonderful, exciting, creative work. Yet the Program folds in business, so that it does not feel overwhelming or unattainable. You meet all the people you should, and learn how these worlds work, how productions come together. You get a complete education in the world of film and television in Canada. That’s a remarkable achievement.”

Tassie amplifies this view. “The CFC started my career. I’d worked for 10 years in film and TV, but never as a writer. It was a privilege to pitch, put myself out there, and come up with ideas to collaborate with others. More than that, it gave me the confidence to call myself a writer, which I’d never had. Having the confidence to articulate that and go out in the world feeling sure with the CFC’s support? That was huge.”

Though conceptually distinct, both
Mary and Little Dog balance comedy and drama, refracting the messy complexities of people’s lives. To capture these tonal shifts in Little Dog, a series about the masculine world of boxing in Newfoundland, the Camerons brought in more women behind the camera: female directors, a female cinematographer, an all-female B camera team, and a female stunt coordinator.

Amy adds that for Cameron Pictures, “It is not acceptable in 2019 to have all-white, all-male directors or writers rooms.” This is especially relevant for the projects they’re attracted to, which, as Tassie adds, feature “complex, strong, female characters juggling life. We love working with and telling their stories, but there’s no single quota for hiring. It’s more that we’re always looking to give people opportunities, whether it’s women; diverse writers, directors and actors; people of a certain age not being considered; or comedy directors wanting to move into drama.”

“Take every job and be kind”

Cameron Pictures is busy wrapping up
Mary Kills People’s season three and have several projects in development with other companies, including one just creatively greenlit with a broadcaster and Heather O’Neill’s The Lonely Hearts Hotel, which they’ve optioned. Tassie notes that they are “happy to be spending all the time making projects” and that they “have enough stuff going to stay busy for the foreseeable future.”

When asked what advice they might give to those coming up, they both laughed and said, “Besides go to the CFC?”

Amy advises, “Take every job you can. Say yes to everything, whether it’s as a PA or on craft services. Open doors for yourself, because the people you meet will always reenter your life. This industry is small enough that it happens, so make as many connections as you can, and be kind and smart.”

Tassie adds, “Our mother would always tell us, ‘Work harder than everybody else and don’t fuck up.’ She wasn’t saying ‘Don’t make mistakes.’ Rather: “Don’t be a jerk. Don’t be difficult. Don’t be uncollaborative. Be a good person and do the right thing as much as you can.’”

The Camerons advocate and practice this collaborative, non-competitive approach. To them, their colleagues are “their greatest support system,” Tassie notes. “These are amazing people who we turn to all the time for help and never feel anything but joy for when they succeed.”

So do all of us at the CFC, as we extend our joy and congratulations to the Camerons for receiving this year’s Award! 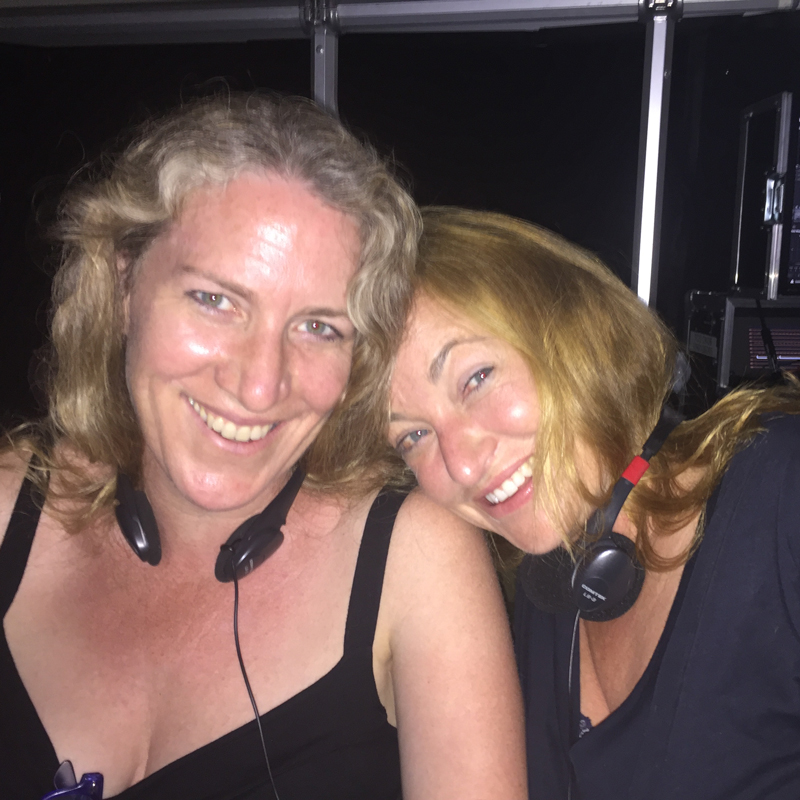