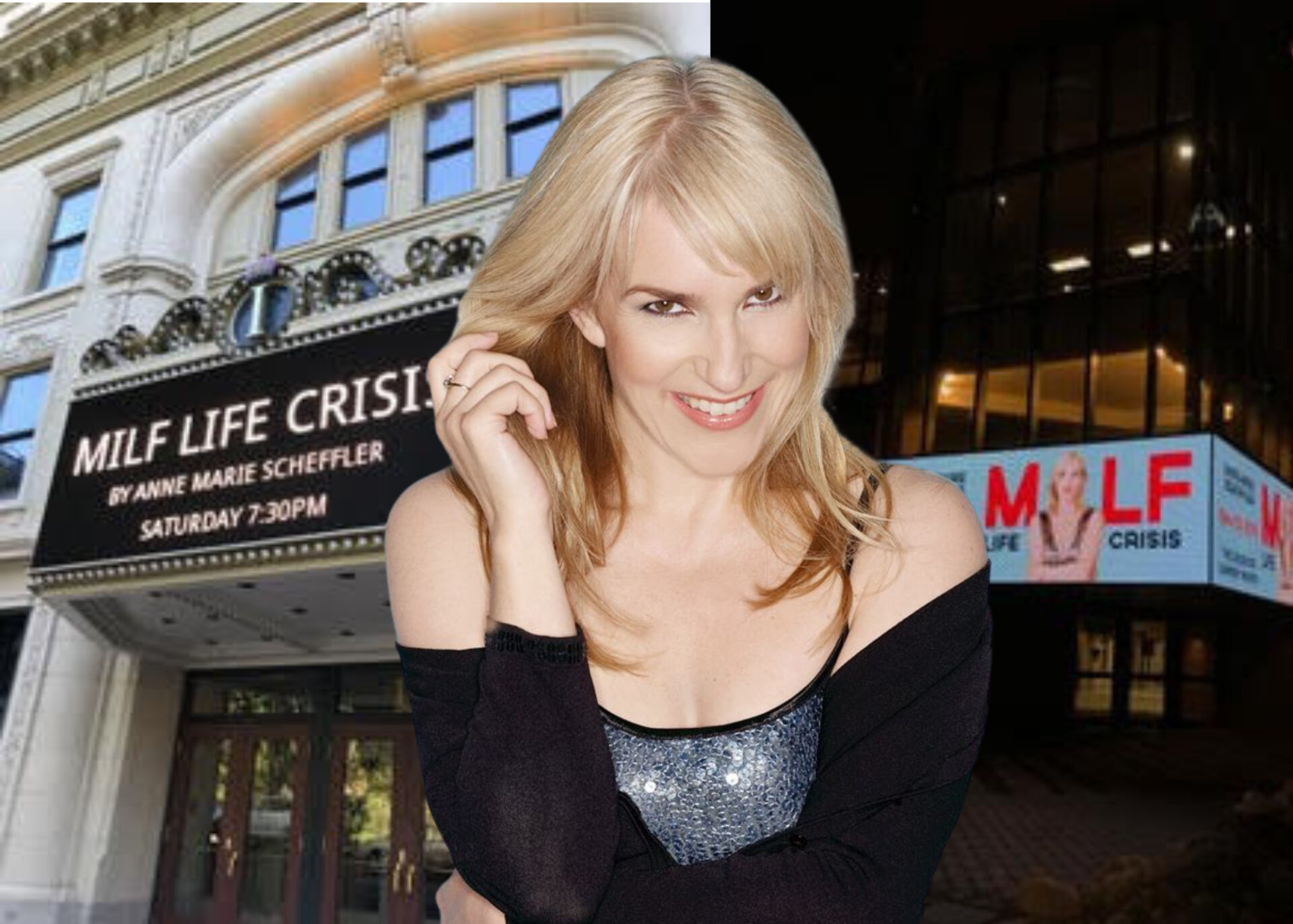 Anne Marie Scheffler is a member of Fifth Wave Connect, a community of feminist women entrepreneurs who participate in the Fifth Wave Initiative, a year-round program offered by CFC Media Lab, and its partners to support the growth and development of women self-identified feminist entrepreneurs in the digital media and commerce sector in southern Ontario.

LiisBeth: Let’s start with the facts. Who is Anne Marie Scheffler?

Scheffler: I was born in Toronto, Rexdale in fact. I’m a first generation Canadian. My parents are German and Polish. My father was a bank manager and my mom was a stay-at-home mom. I started getting paid as an actor at the age of 15. I went to the University of Toronto, got a degree in English, and was at the same time booking professional acting gigs while writing my university exams. From there I went to George Brown Theatre School for formal training. And TV. Oh boy, I wanted to marry TV. With TV you could talk to the world, and I really wanted to talk to the world. Not surprisingly, I’ve been in over fifty TV commercials and love being on TV.

LiisBeth: You’re an actor first and foremost. What led you to write and produce your own shows?

Scheffler: When I got my first agent in my 20s, she got me film and TV auditions. And I was thrilled! Until I saw the roles: rape victim. Go into the audition room and scream. Look, I did go into the audition room and scream. But I kinda didn’t want to get the booking. And another audition was “girl number 1” and I went in with “guy number 1” and we had to neck. That was the actual audition. No lines. So, I’m thinking, “maybe I need to write the roles I want to play.” And so I wrote funny monologues for myself. Honestly, I wrote my first play in grade 3 that our class put on in front of the whole school. I had always been writing for myself. Doing improv. Imagining the possibilities.

When you’re hungry and ambitious in your twenties, you want to act as much as possible. My fellow actor friends and I would do open mic nights, fundraisers, anything to see if our stuff worked. I had about five monologues in my back pocket that I wrote for myself and auditioned with. Artistic directors would be like: “That was great! Where did that come from?” And I’d say “I wrote it.” And that sometimes got me writing job offers which I never took because I was an actor!

In 1994, I had a spot in the Summerworks theatre festival in Toronto. Basically you pay for a spot to put on a show in a respected theatre festival. I had been doing clowning at the time, but my clown partner had left me, and all of a sudden, I didn’t have a show! The producer Benj Gallagher said to do a one woman show. I was like, “Hell, no!” but I was working at His Majesty’s Feast as a singing wench, and my fellow wench, Sarah Sked, said she’d be my director. I sewed my five funny monologues together and created my first solo show Situation: NORMA.

NOW magazine’s late, legendary and much-beloved theatre critic, Jon Kaplan, was at my show on opening night. He loved it so much that he sent a photographer to my house the next day. My picture appeared in the theatre section, with Kaplan’s glowing review in which he called me “a gem.” My career took off. I got a better agent, I worked even more in TV and film, and I wrote two more Norma shows: Watch…Norma’s Back and Leaving Norma.

I toured my Norma shows at fringe festivals in Canada and the US, selling out and getting rave reviews and honing my comedy chops on stage, really poking fun at what it was like to be (supposedly) following society’s norms. I make fun of myself in my comedy, spoofing the conditions I find myself in, to actually shine a light on the ridiculousness of the roles we play in order to be good.

In 2001, I went to a taping of Everybody Loves Raymond at The Warner Brothers studio in Burbank, and the penny dropped. At this point, I was doing TV roles, TV commercials, doing my own live shows, and here was a multicam sitcom. A marriage of theatre and TV. I fell in love with multicam. Soon after, my live comedy show Not Getting Itlong-time into a one-hour Comedy Now! special for CTV/ The Comedy Network by SFA Productions. A seven camera shoot. Of course, I’m still priming the pump for the seven season multicam series–or single camera, I’m flexible–but the path was unfolding.

Ironically, my old agent said to me: “I can see you being like the wife on Everybody Loves Raymond!” And I said “I’m Raymond!”

LiisBeth: What is your relationship to feminism? When did feminism come into your life?

Scheffler: In terms of feminist influences, I can start with my mother. She taught me unconditional love. She is a walking love machine. My mom is, literally, love

That worldview was ingrained in me. It’s why I said no to demeaning roles. I wasn’t up for a career of playing victims. I lobbied with my actor’s union to influence producers to have more women roles that reflected whole, real women.

I knew how to write, and I took charge of my career and wrote and produced “myself.” As Nia Vardalos (My Big Fat Greek Wedding) told me in an article I wrote for the Alliance of Cinema, Television and Radio Artists (ACTRA) on women in the business: “Don’t wait for the phone to ring–call yourself.” Now that I am older and coming from a place that is so much more whole, I have moved way beyond the “pick me, pick me, pick me!” approach to my career to one where, basically, I pick myself.

Great question. So, as a comedian, it’s my job to mirror our shared experience as a society back at that society. I push the boundaries. I say what we are all thinking but I’m not afraid to say. To quote my comedy special: “I’ve achieved my goal! I’m fuckable! But now I’m offended by it!” Honestly, the comedy special is partly based on my experiences as an actor in really inappropriate situations with a producer. Which could have been victimizing, but instead I turned it into comedy gold.

LiisBeth: What’s next for Anne Marie?

Scheffler: Like other actors/producers such as Reese Witherspoon and Pamela Aldon, I’ve been a great artist, now I want to shift to be an equally great business person.

LiisBeth: Congratulations on an incredible journey as a woman in a tough industry! What advice do you have for others?

I remember being in my early 40s, and being a new mom with two little boys. I was juggling childcare to go to auditions, and lying in bed at night, thinking it’s very possible my life and my career are both over. And then I turned on the TV to a new show: 30 Rock. What? A new face? Tina Fey? A woman in her 40s? A mother? Who created a TV series she wrote and stars in herself? Again, the penny dropped. There was still hope. There is always hope. The only one who can limit you is you. Find your own voice and work it. There are a million different flowers in the garden. There is room for everyone. Decide what stories you want to tell, and then tell them really well.

LiisBeth: Sounds a lot like you Anne Marie! Thank you for sharing your talent with the world.

Not in Toronto? You can catch Scheffler’s one-hour comedy special, Not Getting It, Monday December 19th on MTV2.

Fifth Wave , CFC Media Lab’s feminist business accelerator, has teamed up with media partner, LiisBeth  — a womxn-led and owned intersectional feminist media enterprise — to showcase its program participants and their companies. Throughout 2022, Liisbeth will feature the women founders, and their businesses, who are participating in the Fifth Wave program, a CFC Media Lab initiative. Read Liisbeth’s monthly digital magazine for feminist entrepreneurs or check this page monthly to learn more about the inspirational women who are choosing to develop their companies by employing feminist business practices.