Around The CFC Events News
Previous
Next 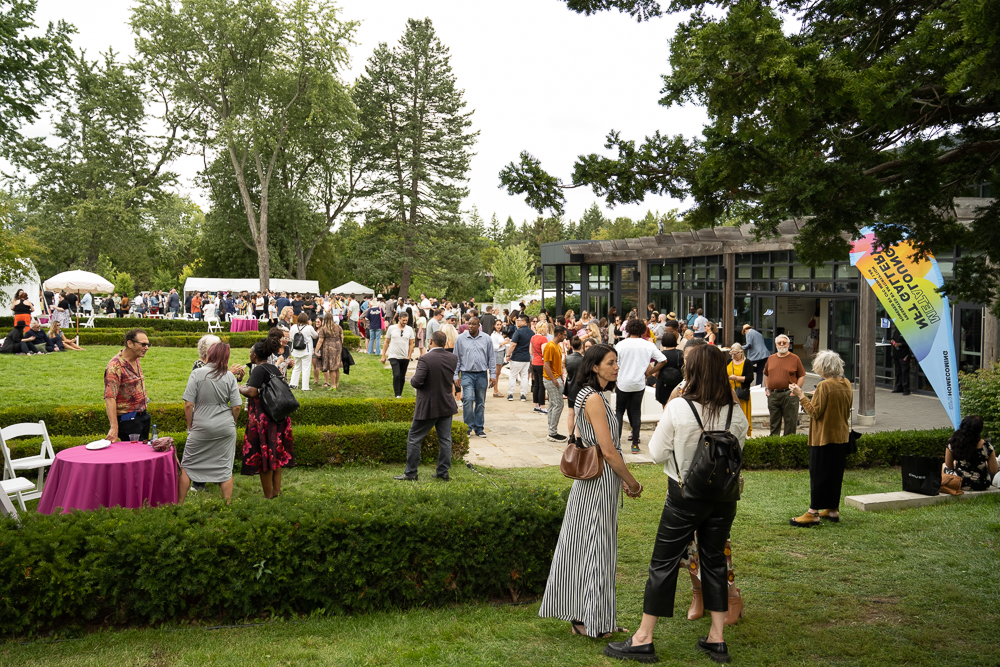 After too long apart, we were so thrilled to welcome our residents, alumni, donors, sponsors and CFC friends back to our beautiful campus on Sunday, September 11 for our annual September fundraiser, now aptly named CFC HOMECOMING.

CFC HOMECOMING was the first onsite, in-person event since 2019, and the first with executive director maxine bailey at the helm. It is one of our few major fundraising events that helps us raise critical funds for our training programs in film, TV, screen acting, music and digital / immersive media. This year’s event brought raised roughly $250,000 gross revenue for our programs, and will enable us to continue advancing opportunities for Canadian creators and entrepreneurs in the screen industry.

The excitement in the air was palpable as a lively crowd of screen-based talent, industry folks and CFC friends and supporters reunited in celebration of the CFC and the incredible storytellers who’ve come through our doors. Guests relished the dynamic mix of activations, performances and experiences onsite, while enjoying delicious food and drinks from local vendors and visiting with new and old friends alike. First Nations Performers Shirley Hay and Marilyn George shared their passion and art with guests through their traditional songs and chants. Slaight Music artist Roslyn Witter gave us a first listen of her upcoming single, “Good Vibes” – appropriately named for the energy at CFC HOMECOMING. A talented group of dancers from Jade’s Hip Hop Academy showed off their moves during a special routine, and DJ Craig Dominic blended the perfect mix of tracks to enhance the celebratory atmosphere.

In between performances, guests could be found immersed in two different digital media activations powered by our very own CFC Media Lab – Stories from the Multiverse, a collection of eight immersive audio, VR, AR and AI experiences, and MetaLounge, an engaging NFT gallery, presented by Artcryption, with support from FedDev Ontario – buying raffle tickets, or bidding on a number of exciting silent auction prizes.

This year’s CFC HOMECOMING was a reimagining of past CFC Annual BBQ Fundraisers – an event that grew out of a tradition that our founder, the incomparable Norman Jewison, started more than 30 years ago, when he’d host a small BBQ at his farm north of the city. While the size and location of the event may have changed, the aim remains the same – to celebrate our incredible residents, alumni and our screen industry.

And there was much to celebrate at this year’s event, as our residents and alumni continue to make waves, break ground and change the game in the Canadian screen industry and beyond. Not to mention that CFC talent is involved in 24 of the 31 Canadian features premiering at TIFF this year! We’re so proud of our growing CFC alumni family (1900+ strong and counting!) – a sentiment that was shared by our founder himself, when he surprised guests with a special appearance at CFC HOMECOMING to say hi to friends, supporters and eventgoers.

“Thanks for coming and thanks for your support of the CFC. It’s so good to see so many old friends, and I just can’t believe it’s almost 35 years ago that we started here and established this place,” shared Norman. “I’m so proud of the fact that it’s flourished, grown and expanded beyond my wildest dreams.”

He went on to mention how incredible it is to have so much CFC alumni involvement at TIFF ’22, and gave a special shout out to Clement Virgo – one of CFC’s earliest alum and Canada’s most celebrated filmmakers – and his new film Brother, which Norman shared he was delighted to read about at length in a Globe and Mail feature. (Read more about Clement and Brother in our spotlight here.)

Before departing, Norman left the crowd with some tried and true wisdom for the next generation of storytellers, “Find a good story. Just tell stories that move us to laughter and tears and maybe reveal a little bit of truth about ourselves.”

After Norman’s remarks, maxine shared two exciting announcements with the crowd: CFC received a $450,000 grant from RBC Emerging Artists through the RBC Foundation to support the next generation of Canadian talent over the next three years. And, our longtime partner, The Slaight Family Foundation, is supporting another year of our renowned Slaight Music Residency with a grant of $200,000, which will provide five music creators with full bursaries to participate in the next cohort or the program. We are deeply grateful to RBC and The Slaight Family Foundation for their continued support of the CFC and of our Canadian talent.

We could of course not host CFC HOMECOMING without the generous support of our partners, donors and sponsors. We extend our sincere thanks to our presenting sponsor, Netflix, for making this event possible, and for their steadfast support of the CFC over the years. We’d also like to thank all of this year’s incredible event sponsors for their generous contributions to CFC HOMECOMING and for investing in the next generation of homegrown talent: AMC Networks, Shaftesbury, eOne, Cinespace Studios , Chubb, Dufferin Gate Studios, Pinewood Studios, Goodmans LLP, William F. White International, A+E, Aeon Studios, APTN, Don Carmody Productions, BFL Canada, Eggplant Sound & Music, Toronto Film School, Clearly Canadian, Super Duper Studios; and to our media partners, Toronto Star and Toronto Life; our incredible CFC volunteers; and to all of the food and beverage businesses that kept our guests well fed and hydrated.

We also extend our heartfelt thanks to our Circle of Supporters, program partners and funders, and the overall CFC community for their continued support and for helping us celebrate CFC HOMECOMING.

You all help us shape the future of storytelling.