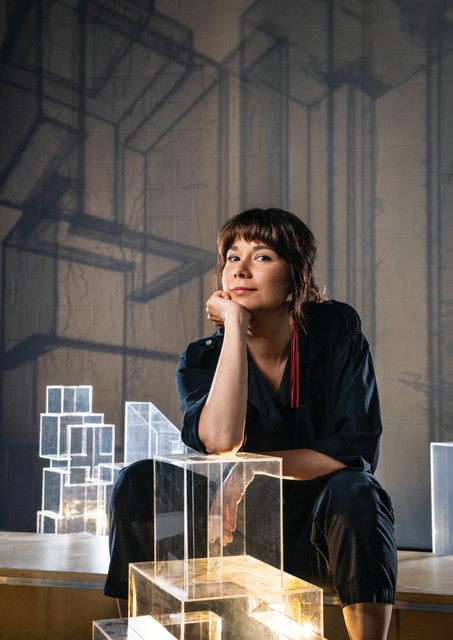 This October marks Women’s History Month in Canada, and what better way to celebrate than to highlight women in film whose work on and off screen empowers women to speak, heal, create and transform the cultural and political landscape in Canada and beyond.

Lisa Jackson is an award-winning Canadian and Anishinaabe filmmaker who uses storytelling to support Indigenous communities and share stories and raise awareness of Indigenous history and culture. Jackson first caught the attention of her screen industry peers when she wrote, directed and produced Suckerfish (2004), an award-winning short documentary that tells a powerful story of when she fled Toronto at the age of 10 to live with relatives in Vancouver to escape her mother’s depression, alcoholism and prescription drug abuse – legacies of the residential school experience. Since then, Jackson has continued to create impactful stories through her independent production company, Door Number 3 Production, which help amplify women’s voices and stories.

We recently caught up with Jackson and took a deep dive into the alumna’s film journey, her unique body of work and her future endeavours. Read more in the spotlight below.

Around this time last year, you received the DOC Vanguard award in honour of your documentary career, which began with Suckerfish. Can you take us back to the making of this intimate short and what it was like for you when you revisit the film?

I’m still proud of my first film’s honesty and unconventional creative approach. Suckerfish has many things I was told to avoid: narration, animation, kids, and re-enactments. I remember shutting out the idea of an audience while making it. I remember being shocked that many were moved to tears when it did screen. I remember understanding in a new way the responsibility we carry when we put someone’s life on film. I remember others with similar stories reaching out to me; they felt seen in a way they hadn’t before.

And I remember that no one really “got” the film until they watched it – despite a 20-page treatment for an 8-minute short. A reminder that film can’t always be reduced to a pitch, an outline, a treatment. We use craft and instinct but some of the most powerful work comes out of feeling in the dark towards something that emerges in the process and can’t fully be described by words and pictures.

You delivered a powerful acceptance speech that honoured the Indigenous film community. What has been the response from the community in regards to your body of work and your ongoing activism?

I’m blessed to be part of a community that often feels like family and has always lifted my work up. I’m thrilled to see the number of incredible Indigenous-led projects finding audiences as the industry has come on board with our stories. The Indigenous Screen Office (ISO) is central to that and I applaud all they’ve accomplished in a few short years and look forward to what’s to come. It’s the culmination of activism and effort going back decades. I’m one small piece of that.

As for me, I’m excited to reconnect – the last year or so has been a whirlwind of production on my feature hybrid, Wilfred Buck, so I’ve been a bit under a rock compared to my more outward-facing engagement these last years.

You created the short film/documentary Lichen. Can you tell us a little more about that and how you came up with the idea for the project?

I read an article in Scientific American about lichen featuring a fascinating self-taught lichenologist Trevor Goward, who lives on the edge of the forest in central BC—and that was it. I pictured an otherworldly, almost sci-fi approach to imaging these amazing life forms paired with Trevor’s unique brand of science-philosophy.

A few months later, we had a lovely visit and interview, and I shipped several boxes of meticulously-wrapped lichen samples he’d collected to Toronto on a bus. Then DP Bob Aschmann and I did all kinds of technical hijinks at York’s Cinespace studio to capture their beauty in macro 3D. After that, editor extraordinaire Terra Long and I shaped the images and Trevor’s words to show how lichen embody the idea of emergence and help us understand deep time. There’s no limit to the number of times I could watch that movie – it is pure peace and joy.

Did your time at the CFC help shape you as a filmmaker? If so, how? Can you share some highlights of your experience at the CFC as a resident of the Directors’ Lab?

The CFC showed me the nuts and bolts of fiction filmmaking in a Lab that was designed to teach us as much as possible about the craft and industry of film and television in less than a year. I came to it from doc filmmaking primarily and the calibre of the training and the guests and the breadth of information we were given access to helped shape my goals going forward. It helped me understand the industry and where I might locate myself within it.

I was inspired by my fellow CFC labmates and impressed by the level of passion the CFC invested in us. I was able to “try on” different styles and genres of fiction storytelling through the exercises and short pieces, as well as my final CFC short PARKDALE, a love letter to the neighbourhood I grew up in. I worked with wonderful producers Lori Lozinski and Lauren Grant (both CFC Producers’ Lab alums) to film with two kid leads, outside, at night, in winter, on 35mm, handheld. NBD.

What’s been the biggest highlight(s) of your personal and professional growth in your career to date?

I’m terrible at top picks. However, I was blown away by the responses people had to my NFB VR Biidaaban: First Light. For a piece of media with little to no discernable story but a strong sense of place and feeling, I was surprised by how moved and inspired people could be without a main character to invest in.

How do you think the screen industry can best support underrepresented films and filmmakers?

Funding. Supporting our own ownership and control of our stories.

What’s the most rewarding part about being a filmmaker?

The privilege of being able to speak to the world through our work, the amazing people we get to meet and collaborate with.

What advice and words of encouragement do you have for aspiring filmmakers and creatives?

Be true to your creative voice and learn how to communicate it as best you can. Be honest with yourself and others about what you don’t know (yet) or what isn’t a strength for you so you can form the best teams.

What are some big dreams or goals that you hope to accomplish in your career?

I started a company, Door Number 3 Productions, the month before the pandemic hit. As a creative, I want to take on my most ambitious projects yet, across fiction and doc. Door Number 3 was inspired by the idea of stepping outside the binary that we so often divide film into: art vs. industry. Can we do both? Make artful work that reaches broad audiences? Also, Door Number 3 sounds like a game show and reminds me not to get too serious about things.

Finishing up my hybrid feature doc Wilfred Buck, with a few other long-form projects in the wings—from fiction adaptations to an animation—as well as a short based on a powerful song by the incomparable Leanne Betasamosake Simpson.