Art in a Digital Age: CFC Media Lab & ARt@LARGE at the Toronto Biennial of Art 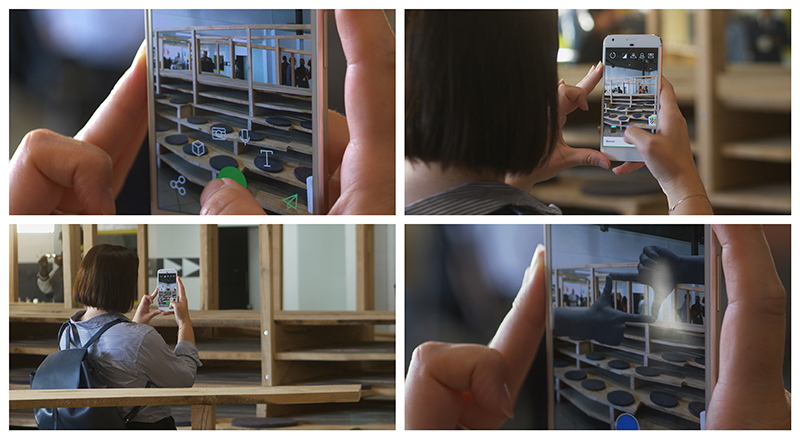 An example of a how ARt@LARGE's LARGE app can be used to bring an augmented reality layer to the exhibits at the Toronto Biennial of Art.

Calling all Torontonians and art lovers the world over: now is your chance to explore a new international contemporary visual arts event taking place in Toronto and Mississauga – for free! The inaugural Toronto Biennial of Art – a crusade for the democratization of art – is taking place from September 21 to December 1, 2019 with exhibition sites across the city of Toronto and at the Small Arms Inspection Building in Mississauga.

This highly anticipated arts event has been in the works since 2014, thanks to Toronto Biennial of Arts Executive Director, Patrizia Libralato. That’s when the idea for it started to take shape in her mind as she set out to turn Toronto into an international destination for art and to showcase Canada’s diverse artists. Five years and countless late nights, meetings, coffee dates and funding requests later, the Toronto Biennial of Art was born, and, for 72 days, is available and accessible for everyone – Toronto residents and visitors alike – to discover and explore.

We’re so pleased that our very own CFC Media Lab had an opportunity to get involved in the inaugural edition of the Biennial through a co-production with IDEABOOST Cohort 3 company Albedo Informatics Inc. You might be wondering what CFC Media Lab, a digital media think tank/production environment/accelerator, and Albedo Informatics Inc., a location-based augmented reality (AR) game/app development studio, have to do with contemporary art, so here’s the (hi)story.

Albedo recently launched a year-long, Canada-wide project to develop AR initiatives and strategies across the arts, cultural and civic sectors under the banner of ARt@LARGE. Why? As Albedo President and Owner Kori Golding explained, “we are currently targeting the arts, cultural, civic and educational sectors, which have been underserved by current AR solutions. We identified this need by participating in numerous industry events where we were often approached by customers from these sectors who were looking for a simple, cost-effective AR platform they could use to achieve their objectives.”

So, they applied for funding to the Canada Council for the Arts’ Digital Strategy Fund, which seeks to stimulate the digital transformation of the arts sector in Canada. After their proposal was accepted, they had the funding and platform they needed to create ARt@LARGE. Their first ARt@LARGE project is the one they created for the Biennial, which came about as a direct result of their partnership with CFC Media Lab. 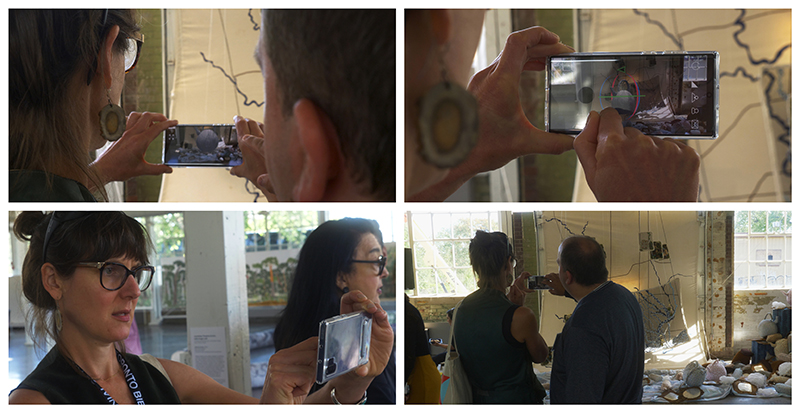 Biennial-goers using the LARGE app to enhance their Toronto Biennial of Art experience with an added AR dimension.

As the digital media vertical of a larger cultural organization, CFC Media Lab was keen to partner with ARt@LARGE on a co-production specifically designed for the Toronto Biennial of Art in order to help bring a technological component to the art event. “We saw this as an invaluable opportunity to add a dynamic virtualization layer to Biennial exhibits, powered by LARGE, Albedo Informatics’ geo-locatative AR content creation platform,” explains Nataly De Monte, Associate Director of CFC Media Lab. “We’re excited to be part of an initiative that broadens the reach of AR, brings it to new audiences and enhances the experience of individuals attending the Biennial.” Additionally, it seemed like a no-brainer for CFC Media Lab to get involved and help profile one of their award-winning IDEABOOST companies – a homegrown, Toronto-based digital studio no less – that features exciting interactive projects.

So what exactly does the ARt@LARGE and CFC Media Lab co-production for the Biennial entail? In a nutshell, it features AR-activated exhibits at numerous Biennial sites across Toronto. These exhibits enable Biennial-goers to experience another dimension of the art event through the lens of AR using Albedo’s LARGE app on their mobile phones (which can be downloaded through the App Store or Google Play). Golding explains that ARt@LARGE is being used as a wayfinding app, which allows users to discover and learn more about Toronto Biennial of Art exhibition sites. Beyond that, users are invited to engage with the art and exhibits in a new way by creating what Golding refers to as “AR POPs” – collections of AR scenes/content – with selected 3D art objects provided by Biennial artists, including Luis Jacob, Adrian Blackwell, Jumblies Theatre & Arts and Lou Sheppard. Users can then share these AR POPs with friends and other app users for the duration of the Biennial.

“We’re really excited to see what people create and how they embrace the medium,” shares Golding. “This level of user interaction and user-generated content is a crucial differentiator from other AR art projects – no other platform on the market allows this unprecedented amount of creative freedom and possibility.” 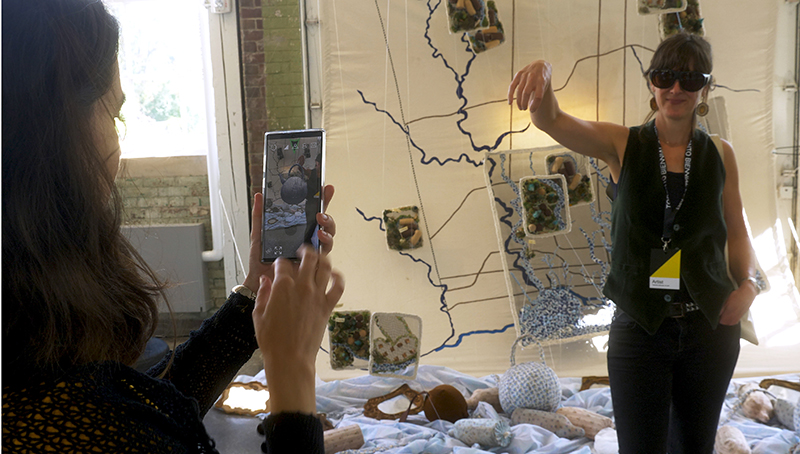 An exhibit at the Toronto Biennial of Art is transformed through the lens of AR using the LARGE app, providing a new way for art enthusiasts to experience art in a digital age.

When creating the co-production for the Biennial, ARt@LARGE took care to work closely with the Biennial and hands-on with a number of Canadian artists in order to gain insights into what their understanding of AR was and how it could be used to add an additional layer of value to their art pieces. There’s value for ARt@LARGE too, “with an anticipated turnout of more than 500,000 and a running length of 72 days, it really provides us with a fantastic opportunity to engage with an audience, and to learn more about what works and doesn’t work in terms of location-based AR,” adds Golding.

The Toronto Biennial of Art runs from September 21 to December 1, 2019 at various locations across Toronto and at the Small Arms Inspection Building in Mississauga. CLICK HERE for more information.