On Mentoring Women in the 21st Century

“We are in period where what it means to be female – and what it means to be a good mentor – are both profoundly in flux,” says Kate Collins, one of the program mentors with the CFC Media Lab’s newly minted Fifth Wave Initiative – the world’s first Feminist Accelerator for women*. For International Women’s Day, we asked seven of the inspiring entrepreneurs who will serve as mentors to the First Cohort of Fifth Wave founders and leaders to reflect on what mentorship means to them in business, and in life.

*inclusive of women-identified and/or underrepresented women 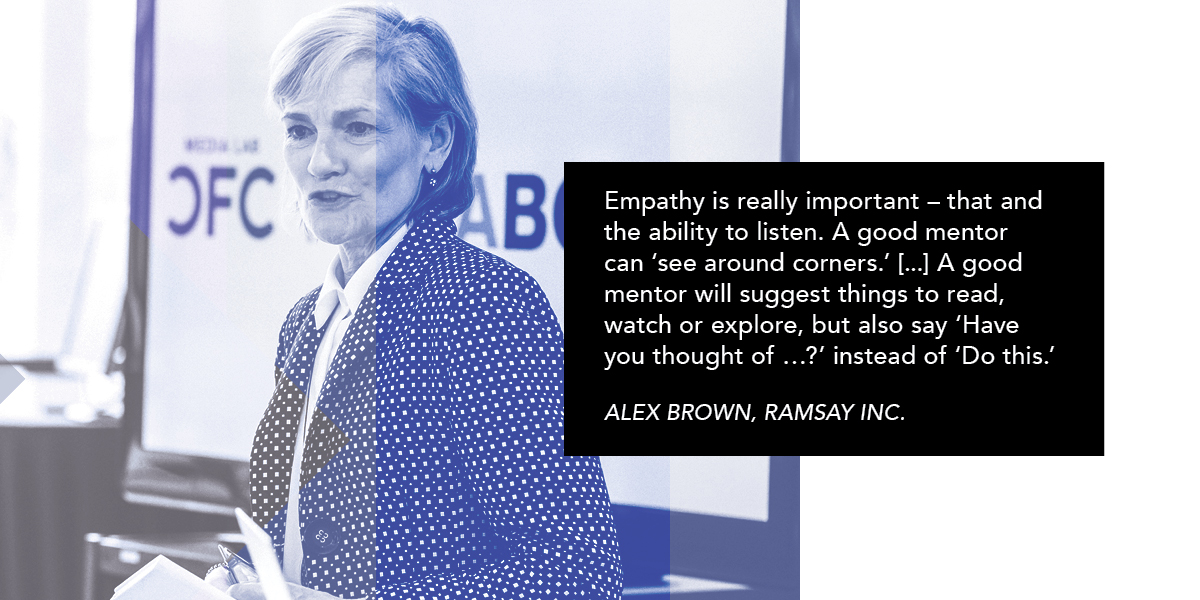 On what distinguishes a great mentor:

“Empathy is really important – that and the ability to listen. A good mentor can ‘see around corners.’ The ability to dig for information, and strip away layers without getting into psychology and self-improvement is key. Being well-read is important, in terms of what’s going on in the world, and what’s going on in the world of business. A good mentor will suggest things to read, watch or explore, but also say ‘Have you thought of …?’ instead of ‘Do this.’

The biggest challenge is helping the mentee understand what questions they need to be asking, and helping them to be focused when they show up for a session. The mentee needs to drive the conversation. So a definition of terms is really necessary. It’s also really vital to model positive behaviours, and demonstrate an understanding of what the women you work with are going through.

I come away with so much from mentoring, often more than I have from being mentored. It’s not an either/or situation. We’re both learning, and being taught.”

On why female mentorship is important (and a good “match” even more so):

“Twenty years ago, when start-up incubators began to grow, it would have been hard to imagine the scenario in which a trans woman mentored a [cis] woman founder of a technology start-up, for instance. There’s real support for applying a feminist lens to how businesses run. And we’re beginning to embrace a broader understanding of how people self-identify as female.

I am a huge believer in mentoring programs where people have the opportunity to meet in person, but it’s entirely possible to have technology partially bridge the geographic and cultural distances between mentor and mentee. Between video conferencing, phone calls and Slack, we have what we need. I actually think that the biggest differentiator in mentoring programs is not “in-person vs. remote.” I think there is more of a split between corporate/professional association mentoring programs, and the rest. The corporate and professional association programs – and there are some good ones out there – tend to match senior-to-junior. They do a kind of match-making by lists of expertise, or what the mentee ‘wants out of the program.’ At their worst, they have a lot in common with bad dating services!

The problem is that people don’t describe their needs very well. The mentoring programs that have worked the best for me have been ones where the mentor or mentee discover each other on their own, or through someone who has really taken the time to get to know each person well.” 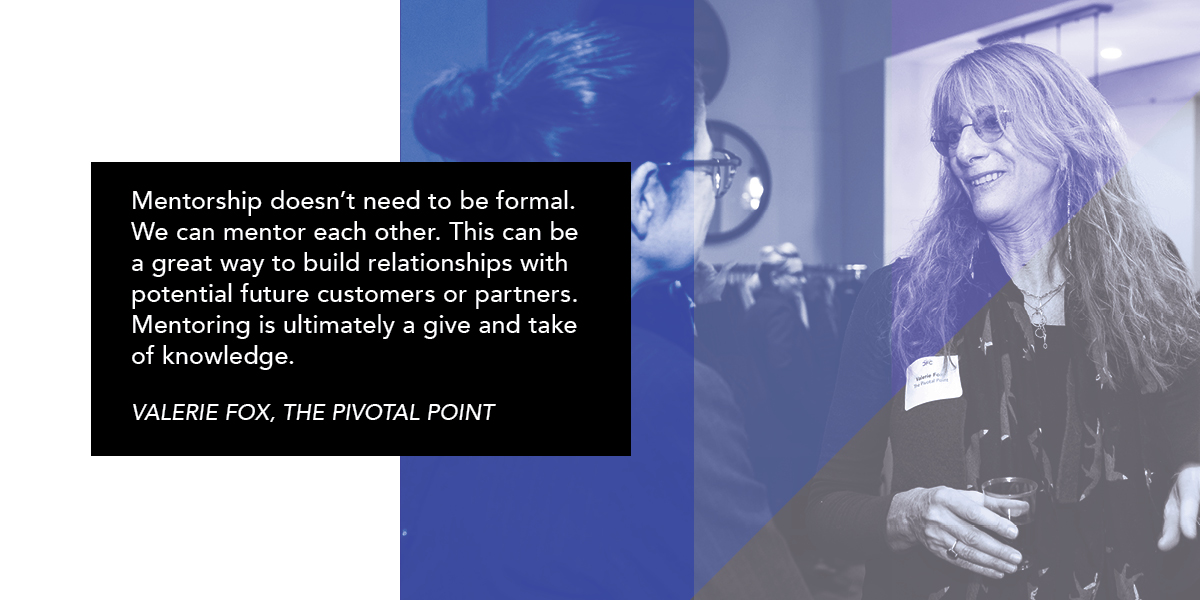 On how one-on-one mentorship works so well, and how it might evolve:

“There is a trusted intimacy when listening and expressing yourself to just one person. I’ve worked with many incubators, and I think the best approach uses a Growth Coach along with a specialized mentor. The Growth Coach is a sort of general practitioner who is a guide for the founders along their growth path. The Growth Coaches connect the founders with specialists as the need presents itself.

I believe that small peer coaching groups are also an extremely good way to ‘chew’ on challenges and get multiple perspectives at the same time. Organizations like Founder City and Infounders (Mastermind) arrange peer founder groups that meet with one another to discuss current challenges and future directions. Participants share stories and learn from one another in a ‘just in time’ approach, with people that they trust under the ‘dome of silence’.

Mentorship doesn’t need to be formal. We can mentor each other. This can be a great way to build relationships with potential future customers or partners. Mentoring is ultimately a give and take of knowledge. I find it one of the most appealing practices in the 21st Century economy.”

On whether it’s better to be the mentor, or the mentee:

Some of the most powerful ‘unlocks’ that I’ve encountered in business came from particularly influential mentors. One is authenticity: great leaders are the same people at home as they are at the office. Do not devalue your values or perspectives. Another is gratitude, which means more than having an appreciation for a consumer, partner, colleague or idea. It’s layered, and not just a means to achieving a sale or a short-term objective. Finally, find ‘the smartest person in the room’. If that isn’t you (when it comes to the topic), then you shouldn’t be speaking – you should be listening.” 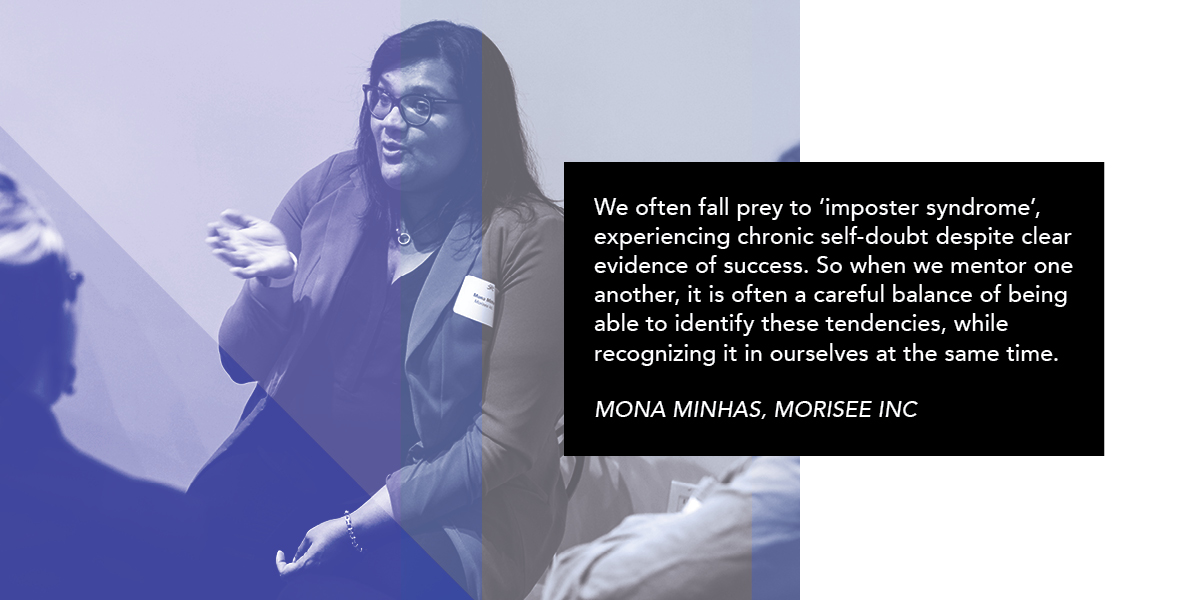 On the biggest challenge of mentoring other women:

“As women, we sometimes have a hard time promoting ourselves – or feeling like we’re worth it, or that we have the right to be in the same room with other successful people. We often fall prey to ‘imposter syndrome’, experiencing chronic self-doubt despite clear evidence of success. So when we mentor one another, it is often a careful balance of being able to identify these tendencies, while recognizing it in ourselves at the same time. It’s important to ‘normalize’ these habits and allow for the learning and unlearning that must occur to correct them, so that we can actually drive meaningful change in ourselves. This takes the sharing of a lot of stories, reflecting on mistakes made, and the bravery and encouragement to try something new!”

On a valuable mentor in her life and career:

“I’ve had several influential mentors throughout my career, although one relationship stands out because it was based on shared values. We worked indirectly together in the R&D division of a global tech company before he became my new boss. This company was traditional in the sector, engineering led, with a hierarchy of technical domain experts moving up into key leadership roles, all reflecting the male-dominated pipeline. I was relatively new to the sector and had a non-linear career path by comparison.

My new boss led by example, developing a work culture that rewarded competence, as well as critical, open thinking, empathy for others and a sense of community. He recognized these qualities in me, and offered me a key leadership role overseeing the hardware product division globally. He saw the breadth of my experience as an asset in solving critical problems with a different approach, and could grasp that there are many different paths upward. He believed that having a sense of community enables scalability – which is where corporate environments often fail due to organizational complexity and unclear ownership.

We actually only worked together for a year before he moved to another company, but we remain in touch. That was over 8 years ago, and although we never used the term formally, he remains a valuable and trusted mentor.”

On the evolution and many incarnations of mentorship:

“I have seen mentorship evolve over the years, and I believe it can work in several forms. I’ve had assigned mentors, requested mentors and informal mentors that were working with me one-on-one. All were great for building a relationship over time, allowing the mentors to ‘check in’ and provide support, especially for specific needs as a person’s career, or business, grows.

I’ve seen the one-to-many arrangement work in large organizations. This format allows executives to get to know big, broad teams quickly and provides executive access to up-and-comers. It’s a win-win, although I’ve only observed one-to-many for short term, not lasting relationships.

I’ve also seen a many-to-many mentoring format, and I think this arrangement works where there is a need to find a ‘good fit’ between mentor and mentee. It’s quick and useful, and it can also be very helpful for Q&A type forums, where there is a need for many to speak and many to listen and learn.

Women’s mentorship is very much needed. It’s uncommon, for one thing. From a mentee perspective, finding a female leader who reflects your own values, and has been successful in a similar field, is like finding gold. ‘If she can do it, so can I!’ There is an ease and comfort that comes with having a woman mentor that you trust. It is an extremely enjoyable experience: learning about creating and running a business, building social capital, and gaining wisdom from women who have preceded you.”