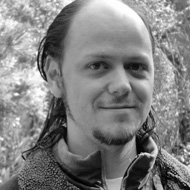 Mario Márquez Lartigue calls himself an “image-ineer” (an image worker), explaining that he came to the concept because he dislikes pigeon-holing his work into a single medium.

His specialty is audiovisual narrative, whether it’s a history that demands audiences draw its own conclusions from the linear material or one in which the audience’s decisions become part of the plot.

His career has included creating cinema narratives using celluloid only; he has produced analogue and digital video, using linear, non-linear and interactive techniques; and he has been a resident at the following laboratories:
Niagara Custom Motion Picture Lab (2000-2004), Liaison of Independent Filmmakers of Toronto (2000-2004), the Canadian Film Centre Media Lab (2005) and the Banff New Media Institute (2007-2008).

His work has been shown at film festivals in Mexico City, Morelia, Tijuana, Guadalajara, Rotterdam, Italyand Toronto; and at international new-media conferences in Mexico City, Xalapa, Toronto, Banff and Australia.

His professional work includes experience at major television channels; he has edited and directed documentaries, videoclips and commercials; and has developed interactive DVDs and software for numerous clients and institutions.
His current work is principally focused on university instruction, research and new-interface development for real-time moving-image montage.