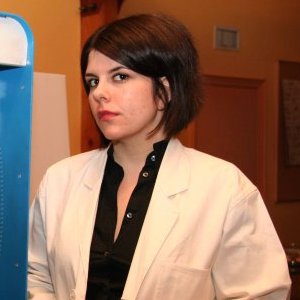 Laura Paolini is an artist living in Toronto. She is as a professional writer, arts administrator, sometimes educator and internet-kitty enthusiast. Her artwork is primarily conceptual and is executed in media-based installations. It has been described as quirky and refreshing, as well as seductive yet subversively political. She has exhibited at art-based fundraisers and fairs and in gallery settings such as Other.World, described as “an exhibition of five contemporary artists at the cutting edge of animated machinations,” at Redbull 381 Projects in Toronto, and her most recent solo show, Hello Schrödingerexhibited at Hamilton Artists Inc. January 9-February 26 2010.

Laura graduated from the Ontario College of Art and Design in 2007, and holds a BFA with Distinction from the Sculpture/Installation Department in the Faculty of Art. Her theses on problematics in the history of art have appeared in arts-based publications (student, professional and international) including Les Fleurs du Mal, Fuse, MusicWorks (Toronto)and <H>ART International. Laura is the Internship and Communications Coordinator at Vtape, and holds an executive position on the Board of Governors for Fado Performance Art Inc. Recently Laura was a resident in the Telus InterActive Art and Entertainment Programme at the Canadian Film Centre’s Media Lab. Her most recent residencies were at the Experimental Television Center (Owego, New York) in March 2010, and she also participated in the Storefront Residencies for Social Innovation, hosted by Broken City Lab (Windsor, Ontario) in July 2010.