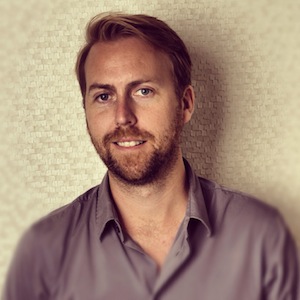 Jay Bennett is an Emmy Award® winning leader in the global digital landscape whose unique creative vision has been appearing on screens of all sizes for almost a decade. A regular speaker on transmedia entertainment Jay has created and produced numerous award-winning productions and applications. From the world’s first App series Totally Amp’d – named a ‘Killer App’ by Wired Magazine in 2012, to the Emmy-winning Fallen: ARG, to the buddy road trip comedy television series Backpackers for CW, to the transmedia storyworld State of Syn.

A touchstone of his work has been blending storytelling with innovative technologies, social strategies and brands, bringing a 360° approach to mainstream audience engagement. International clients include Disney, BBC, CW, Astral, Corus, UKTV and CTV.

Jay holds a Bachelor of Arts from the University of Victoria. He has worked in India, the UK, the Netherlands and Canada and has had further media training with the National Film Board of Canada and the Canadian Film and Television Producers Association.

Navigate the incredible potential of consumer apps on wearable technology.