Unicorns are privately held startups
valued at more than $1 billion (U.S.). Coined in 2013 by venture capitalist Aileen Lee in a Tech Crunch post, the term evokes this mythical animal to represent the statistical rarity of ventures with that level of valuation. Since that time, the startup and venture community worldwide has embraced the term; within just two years, there have been more than 1,700 articles featuring the term.

From 39 companies in 2013, the “unicorn club” has grown to 376 companies worldwide today, according to CB Insights
here. More than half were born in the U.S., and only one is Canadian (Kik), but the term has become shorthand for startup success. Growth and spectacular valuations have come to influence, by extension, the success of a regional startup ecosystem such as that seen in Southern California (SoCal).

Many noted the 2017
news that SoCal tech ecosystem, stretching from Santa Barbara to San Diego, now includes 15 unicorns. By 2018, SoCal added another seven, according to CB Insights. 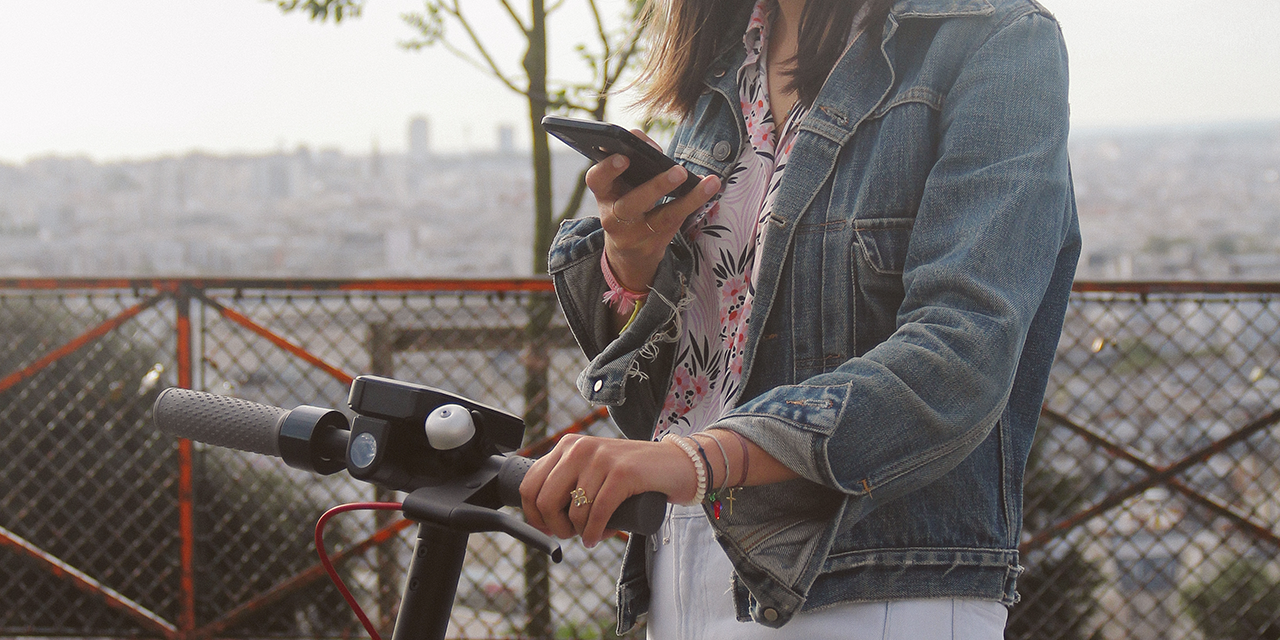 Bird, an electric scooter sharing company, was one of the fastest growing startups in 2018

Other companies in or near the club include
Ring (acquired by Amazon), Dollar Shave Club (acquired by Unilever) and BlackLine (IPO in 2016). Overall, SoCal is home to about five per cent of the world’s unicorns, and 10 per cent of those based in the U.S. Los Angeles, meanwhile, ranks fourth in the world for the total number of tech deals completed (2,659) between 2012 and 2018.

The drive to build unicorns has even spawned a SoCal
conference, “The Unicorn Quest,” sponsored by the Alliance for SoCal Innovation, which features current and aspiring unicorns and some of the investors who would benefit most from investing in them (e.g., companies that achieve such lofty valuation upon an exit, or the sale or public offering of stock).

How useful is the Unicorn designation in assessing a regional tech ecosystem? As the Alliance for SoCal Innovation announced their event, “The existence of unicorns provides a natural boost to ambitions,” and “it also says a lot about the strength of the ecosystem. Large rounds often lead to large exits, which creates wealth locally (especially if local investors get in on the action) and propagates a virtuous cycle of more local expertise and capital to launch more startups taking moonshots, and so on.”

Certainly, the continued growth of high-valuation companies in a region shows that there are effective founders with big ideas and the ability to attract capital there. Silicon Valley’s mentality of ambitious founders and the investors who support them is one of the reasons why the vast majority of high-valuation startups have been incubated there.

A 2018
report from Boston Consulting Group (BCG), which operates a small fund and incubator here, suggests that “Southern California could be the next great tech ecosystem.” They cite factors such as the area’s unmatched educational resources and its growing “entrepreneurial density” in at least two of the vast region’s eight “hubs.” The top requirement for success is to narrow what BCG calls the “venture capital gap” with the dominant Bay Area ecosystem.

“At the pre-seed stage,” BCG reports, “SoCal attracts funding levels roughly on par with Silicon Valley. Yet by the seed and early-stage rounds of funding — critical points in the life of any startup — SoCal trails Silicon Valley by a factor of four, based on 2012 to 2016 data provided by PitchBook, a financial analytics company based in Seattle. The gap grows even wider during the later stages of the venture-funding cycle. SoCal trails the Bay Area by a factor of seven in later-stage venture rounds. What this means is pressure on founders to migrate north to Silicon Valley when it’s time to scale.”

The report delivers six recommendations, including how to attract investors, elevate founder ambitions, improve and interconnect the widely dispersed hubs, and tell the SoCal story more effectively. That could appeal to stakeholders who could be brought into this growing startup ecosystem, especially as skyrocketing housing and labor costs make the Bay Area less attractive. As one BCG respondent said, SoCal “offers a more varied ecosystem with diverse influences more likely to lead to innovation.” 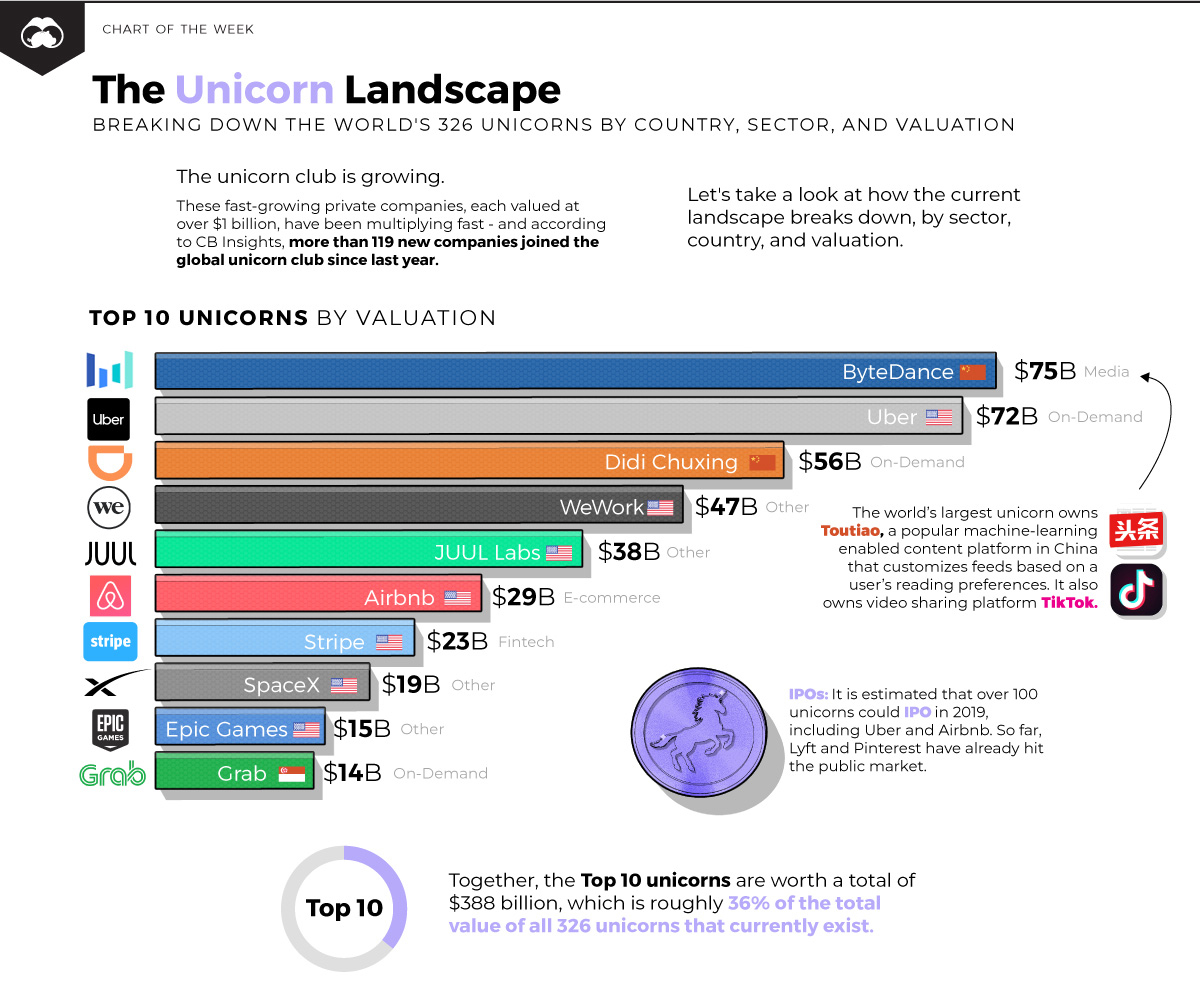 Visualizing the Unicorn Landscape in 2019 by Visual Capitalist.
Click here to view the full infographic.

Silicon Valley’s big institutional VCs, clustered along Sand Hill Road in Menlo Park, gamble that a small percentage of their portfolio companies will achieve immense valuations, and in turn, generate huge returns. They know that most companies, even those that succeed over time, do not deliver the
Holy Grail of 100x returns, which are only achieved when a company exits by selling itself or going public with an IPO.

The billion-dollar-plus valuations of the private unicorns are extremely useful tools for investors and founders to convey their value to the broader market. Yet there is no validated math involved in calculating these valuations. The numbers project a company’s potential, and they are essentially made up, as this Bloomberg
report notes. For many outside the circle of investors and unicorn founders, the Emperor may not be wearing any clothes.

A key reason for the proliferation of unicorns is that venture-backed companies are staying private longer, to take advantage of the high valuations as a private company, and to harvest a flood of private equity and other types of investment capital flowing into high potential startups. These more mature startups keep raising new and larger rounds, sending their valuations through the roof. The result: since Lee’s original post, the number of unicorns has grown tenfold. This is the new normal.

For companies, the primary downside comes with the expectations created by these super-high, and some would say unrealistic, valuations, which can result in an exit that is considerably smaller than valuation created at their last venture funding round. A 2015
analysis from Mattermark lists which unicorns whose survival may be at risk: those that have raised $100 million or more; those with flat or negative employee growth in the last year; those with declining social media mentions; and those with declining revenue drivers.

Even if an exit is successful, meaning, it delivers on the estimated valuation, these companies immediately face intense pressure to deliver growth and profits from either the acquiring company or Wall Street public markets.

For a startup ecosystem largely comprised of companies that are not and never will be unicorns, this framework causes numerous problems. The emphasis on mega-growth and massive scale by top-tier investors may result in capital starvation for a host of promising startups that solve real problems in the world, but are not growing fast enough. Investors outside the charmed circle of the unicorns may look at returns at the top of the market and become stricken with fear of missing out,  further contorting investment decisions.

Of course, looming behind a formulation built upon “made-up” numbers is the spectre of another market crash. It was not so long ago that NewsCorp’s
acquisition of MySpace for $580 million in 2005 fueled hopes of a new era in SoCal startup success. Six years later the assets were sold off for $35 million as a result of its failure to grow revenues and to successfully compete (with Facebook).

So in conclusion, Bryce Roberts, cofounder of O’Reilly AlphaTech Ventures, may have represented the naysayers best when he
tweeted this gem in 2015: “Beware of confusing donkeys in party hats for unicorns.”

Nick DeMartino is a media and technology consultant based in Los Angeles. He is chair of the IDEABOOST Investment Advisor Group.