We are pleased to share the four feature film projects and associated creators who have been selected for the second cohort of the features stream of the CFC/Netflix Project Development Accelerator.

The CFC/Netflix Project Development Accelerator is a three-month offering that is tailored to the specific creative and business needs of the selected participants and their feature projects. It is designed to offer advanced project development support and to bolster the international reach of the feature film projects through access to international creative and marketplace expertise and mentorship. The 2021 features stream runs from July until the end of September.

There are two additional accelerators offered as part of the Netflix/CFC Global Project, the Calling Card and Marketplace Accelerators. These are yearlong accelerators, which, to date, have supported more than twenty projects, from shorts to features and TV series. Head here for more information on specific projects and participants.

Read on to meet the participants and their feature projects: 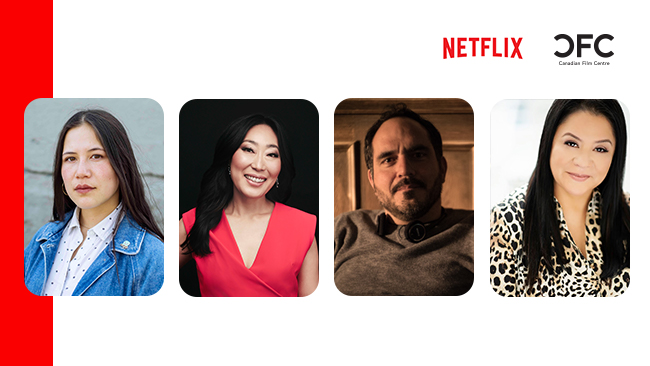 When a gambling addict is scammed, he must remake the money in secret to keep the losses from his family, whose own private dramas could just as easily tip their future to either collapse or stability.

Gillian McKercher is a writer and director from Calgary. Her past work includes music videos, documentaries, short films, and the feature film Circle of Steel. She is currently in production on a dramatic short film and in fall 2021 she will release a documentary on CBC about oil cleanup as part of the energy transition. As co-founder of and producer at Kino Sum Productions, Gillian supports artist-driven projects, formal experimentation and emotionally intimate stories. She splits her time between Toronto and Calgary.

Seventeen-year-old, Angie, must choose between protecting her mother’s secrets or saving herself and younger brother David.

Joy Haskell is an Indigenous filmmaker. She created an Indigenous comedy Hey Cuzzin, which is now being developed as a half-hour television series with Mosaic Entertainment. Her original drama series is in development through her company Firediva Productions, along with her debut feature film, Cookies or Crack, which has been supported by WIFTV Tricksters & Writers program. She is an alumna of Women in the Director’s Chair (WIDC) and is the 2021 recipient of the WIDC BANFF Fellowship Award, as well as the Banff World Media Festival Diversity of Voices Fellowship.

When Sunny Park’s husband announces he’s leaving her, the successful hotshot ad exec retreats to the country with her daughter and her mother to learn traditional Korean recipes and in the process rediscovers the importance of food, family and love.

Born in Seoul, Korea, writer/director Gloria Ui Young Kim is an alum of the Canadian Film Centre’s Directors’ Lab, TIFF Talent Lab, NSI, and recipient of the Corus Fearless Female Filmmaker Award Kim. Gloria recently directed, wrote and produced her first feature, Queen of the Morning Calm, which won many awards, including the Women in the Director’s Chair Feature Film Award and the DGC Ontario Best Director Award. She recently directed for the hit series Coroner (CBC), an MOW for Cineflix (Lifetime) and sits on the Board of Women in Film and Television – Toronto. Gloria is currently slated to direct an episode of Heartland for CBC.

At the height of the Cold War, and deep inside the Cuban Revolution, a young diplomat and her rebel boyfriend must choose between their love for each other or an ideal world as they become embroiled in a plot to assassinate Fidel Castro.

Boris Rodriguez debuted with the award-winning documentary Havana Kids before attending the Canadian Film Centre in Toronto. His subsequent narrative films have screened at festivals including TIFF, Tribeca and Karlovy Vary. In addition to working in the U.S., Boris holds Canadian and Mexican citizenships and was selected to participate in NBCUniversal’s prestigious Emerging Directors Program. In addition to Zoila and Andy Boris is currently developing the features Century of Redemption and Covet; all are timely thrillers that deal with culture clashes and economic disparity.

Applications are now open for the TV series stream of the CFC/Netflix Project Development Accelerator. This initiative is for Canadian creators who are Black, Indigenous, Racialized, 2SLGBTQIA+, and/or living with disabilities. Learn more and apply HERE by July 30, 2021 .