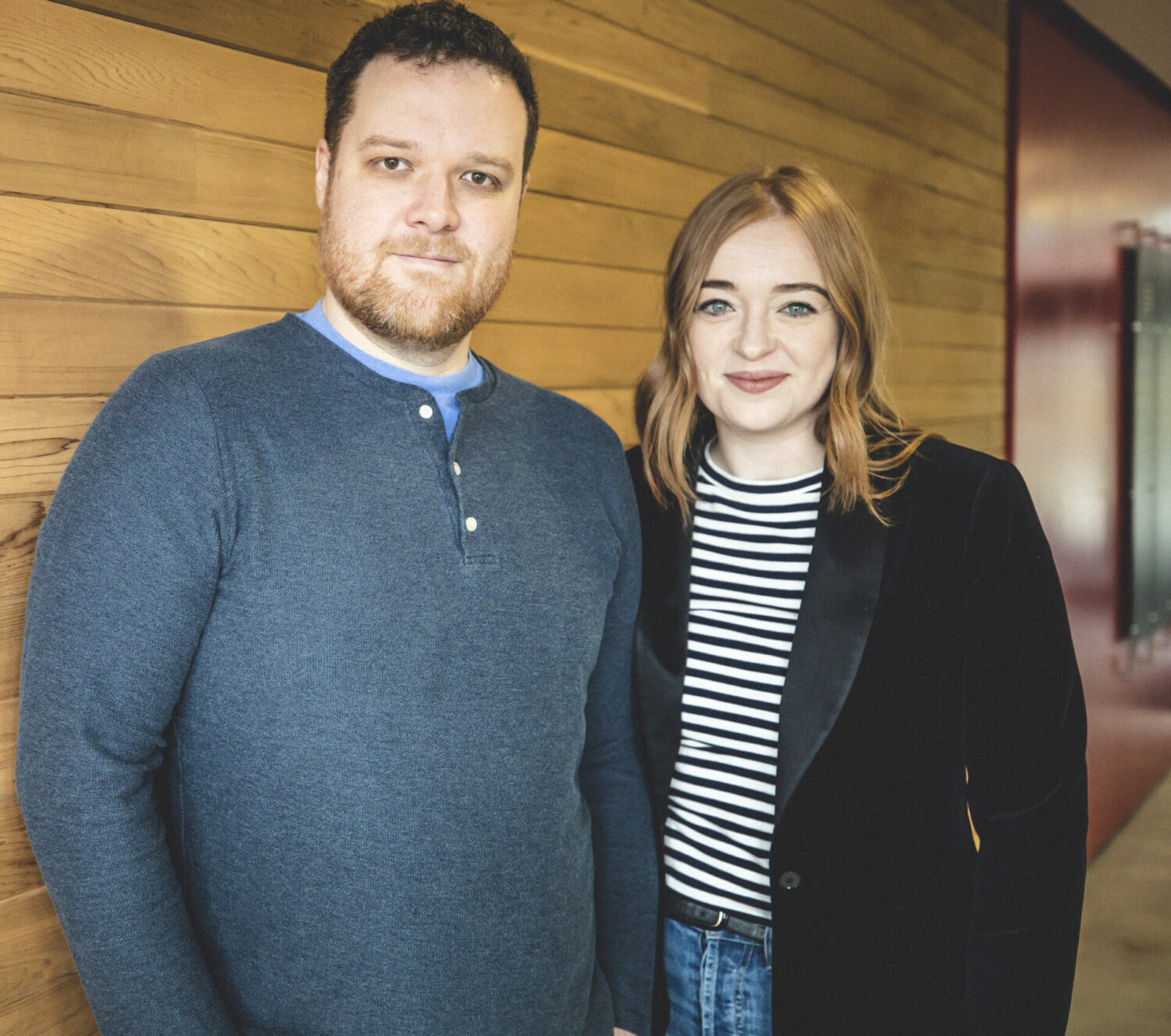 Erik Peterson and Alannah O’Neill make a great team. Together with co-founder Aria Shahingohar and senior engineer Yi-Shiuan Chen, they’re the brains behind Origami XR, an exciting tech startup that allows architects, interior designers and urban planners to create realistic virtual walkthrough experiences of any space – whether it exists already or not. The recent IDEABOOST alums spoke to us about bringing their revolutionary product to market, how their CFC mentors helped shape their vision, and the limitless potential for expanding its uses.

Q: How did Origami XR begin?

Erik: The original idea for the project came about in 2014, when I was messing around with this virtual reality (VR) development kit I’d gotten. I have kind of a history in [the VR] space – in 2003 I was working in the Columbia VR/AR lab down in New York. The Oculus style kit that came out in 2012 made it pretty clear to me that we were fixing some of the problems that had made it impossible to think of these things as consumer items. So I was excited about trying to build and find content for the space, but it was pretty clear that content creation was going to be a big hurdle – and that it was going to be pretty expensive.

In general, capturing live environments – or even just taking existing virtual environments and trying to get them into VR – shouldn’t be a hurdle. It really is an engineering problem, not anything else. So I started messing around with some ideas, and I came up with something that I thought was pretty substantial. I started filing a patent right away. I reached out to the Indiegogo founder Slava Rubin, who I’d known personally and professionally, and that’s what started the whole thing rolling.

Alannah: We went down to Silicon Valley, where we had to do all sorts of pitch decks. We realized pretty quickly that a lot of the VCs and a lot of the investors we were speaking to weren’t super technical people. It was a really labour-intensive experience. Most of the people hadn’t seen VR before, and it was a half hour of setting up this thing and we had to explain what VR was just to get people into the room. We realized pretty quickly that there was a lot of education that needed to happen in order to show people why our product was valuable. My own background is communications, I worked on staff at a magazine for five years. So I came on [board] and started creating these research briefs for people, so that even if they were not technical, they would understand why what we were doing was valuable.

Q: So for the non-technical amongst us, what does the XR in Origami XR mean?

Erik:XR is really just a way of describing the whole umbrella of new realities that are being created: all the digital and mixed realities that are being created with all this new tracking technology. So the gist is that we’re building for that whole broad wave of spatial computing. The most important part for us is the content itself, not necessarily what device you’re using. So VR and AR are really just two different devices, and two different ways of integrating digital realities into existing reality.

Q: Right now your main market is architecture. Will Origami have other applications?

Erik: Architecture is an industry that has a high volume of spatial information that they want to communicate to people. One of the things we’ve done [for architects] is set it up so that you don’t have to ever install any new software to look at a new piece of content – you’re just clicking on a web link. The data will download instantly, and you’ll be inside of [the new building design]. That type of experience really reduces the friction in using this kind of tool for communication. For architects, it makes a ton of sense.

What we’ve built is also a full, functioning video platform. So the other main category of people we’re working with is people who want to create volumetric video experiences; experiences that are full environments that you can walk around inside of, that are also fully animated. In that case, the big thing that’s differentiating us from other game engines or platforms where you might build interactive experiences, is that it’s completely video-based. You can literally stream it over the Internet, just like you would a Netflix video. 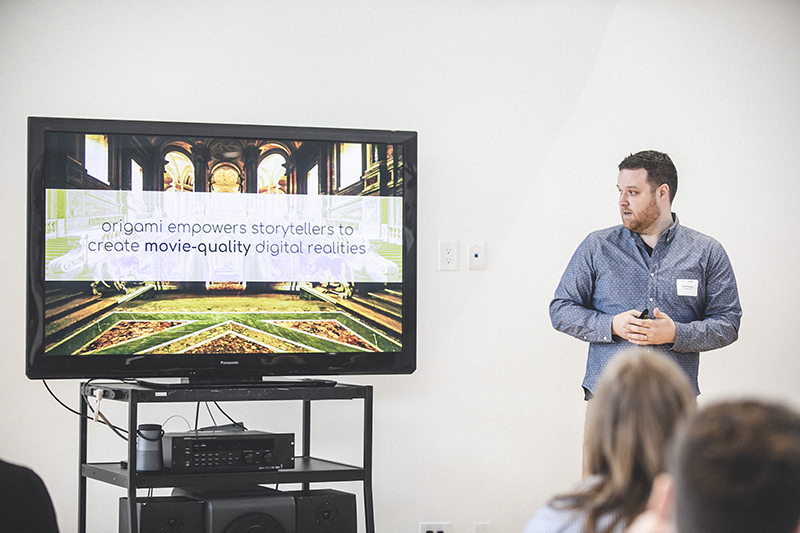 Q: So could someone take an Origami environment and make it the basis for an interactive game?

Erik: Totally possible. I reference a product from the past a lot, a game called Myst, which is a good example of a game that was built completely on top of pre-rendered environments and images. Our platform is about pre-rendering visual environments. You can really build anything you want on top of it. So you could totally have a fully functioning Myst-type game that lives on top of this pre-rendered platform. You can kind of think of us as a PDF, a JPEG or an MPG – a format that allows you to easily share full, walkable spatial environments.

Alannah: We can actually put people in buildings before they’ve been built. It’s really valuable for architects specifically, because so many people have trouble reading blueprints. Unless you’re an architect, or somebody with a lot of experience in that field, chances are you can’t look at a blueprint and say, “Oh, I know exactly how big this is going to be.” Or “I know exactly where the light is going to come in.” You can’t know how it’s going to feel when you walk through it. Now we can work really easily with architects to help them create these types of environments, in a really easy way. If their clients don’t have VR headsets, they can still use that spatial data on a tablet or even a web browser on their phone to get an experience of the space.

Q: Can you talk about your experience with the IDEABOOST accelerator?

Alannah: I loved IDEABOOST. I really found it valuable for us, especially because we joined at the perfect time for the phase our company was in. We had to work on things like pricing and really refining our sales funnel. IDEABOOST gave us access to mentors who were able to say “This is what I did,” and “This is what works.” It was really a godsend.

Erik: Yeah, we were going through a pretty big transition from R & D – which we’d been in for almost four years – to a customer-facing sales and marketing operation. That required a lot of learning on our side, and acquiring new skill sets. We got the perfect type of support that we needed from IDEABOOST.

Alannah: We had access to really successful sales people, who were able to help us with financial projections, with the design and direction of our website, and even our user interface. And I can’t even mention the pitching enough. The pitch practice that we did with Warren [Coughlin] was incredible for helping us refine our product messaging – because as we’ve discussed, the product can do so much. The technology has so many possible applications to it. He really helped us to whittle down the most important part of what our technology can do, and how best to communicate that.

Erik: It’s a pretty big blue ocean for us at the moment. There are a lot of verticals we’ll be able to side-step into after we get a foothold in architecture. It’s going to be a matter of properly gauging the opportunities that are out there, and the markets where we can provide the most value to customers. It’s pretty exciting, it’s very engaging, and there’s a lot of potential for us to grow.

Q: Speaking of the future, any advice you’d give to young entrepreneurs in tech?

Alannah: Just expect everything to take 10 times longer than you think it will! [laughs] Make sure that you have a good support network around you, because it is extremely taxing. That’s pretty important.

Erik: Don’t try to predict the future too exactly. Try to just go with the flow of what’s happening around you, whether that’s technically, or in the marketplace. Don’t try to force things to happen. Try to “read the waves” of the environment around you. For us, it was actually really important that we waited for the right hardware to be available before we moved forward – because if we’d tried to move forward before that hardware was available, we probably would have gotten the wrong signals.