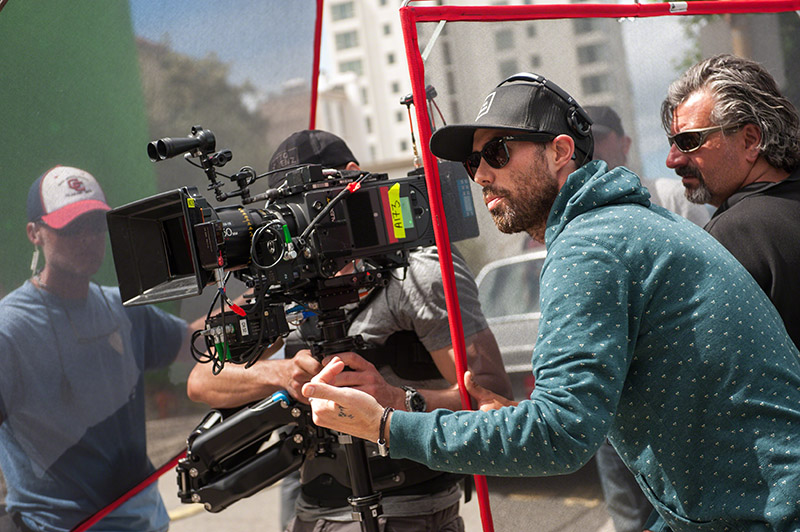 Brad Peyton may be different from what you’d expect a successful action adventure Hollywood director to be. He’s not dramatic, intense or imposing – he leaves that to his films. He’s unassuming and “probably very shy compared to other action adventure filmmakers,” Peyton divulges. He works in showbusiness, but admits he’s no showman. He’s a driven, ambitious, hardworking creative risktaker who grew up outside of Gander, Newfoundland, where he spent a lot of time playing in the woods as a kid. From a young age, Peyton read novels, collected comics, drew and painted, and was drawn to filmmaking – he always loved visual arts and storytelling. As Peyton explains, “Movies were the medium that brought all that together. I was able to tell stories visually.” He was constantly using his imagination to invent games and stories throughout his childhood, and that ultimately evolved into Peyton telling stories on screen.

Peyton is an acclaimed director, producer and writer, and he’s this year’s recipient of the CFC Award for Creative Excellence. He has come to be known for crafting ambitious action adventure films, including the commercially successful blockbuster hits
Journey 2: The Mysterious Island (2012), San Andreas (2015) and Rampage (2018), with all-star Hollywood heavyweight Dwayne Johnson. Beyond action and adventure, Peyton is committed to making a variety of original, high-concept entertainment. He founded a production company, ASAP Entertainment, with producer Jeff Fierson, which creates elevated film and television for a global audience. Some of their credits include the Netflix/Discovery historical period drama series Frontier, which was largely shot in Newfoundland and Labrador and stars Jason Momoa, the post-apocalyptic comedy-drama Netflix series Daybreak, and the upcoming action thriller Sweet Girl, which also stars Momoa and is set to release on Netflix this year.

The annual
CFC Award for Creative Excellence honours CFC alumni who have made significant creative and entrepreneurial contributions to the international screen-based entertainment industry. Peyton undoubtedly displays a commitment to creative excellence through his exciting, original and impactful content. Peyton is a prime example of the type of world-class talent that comes out of the CFC. He embodies many of the qualities and values espoused by the CFC, and we are so pleased to honour him with this award. Read on to learn more about Peyton. 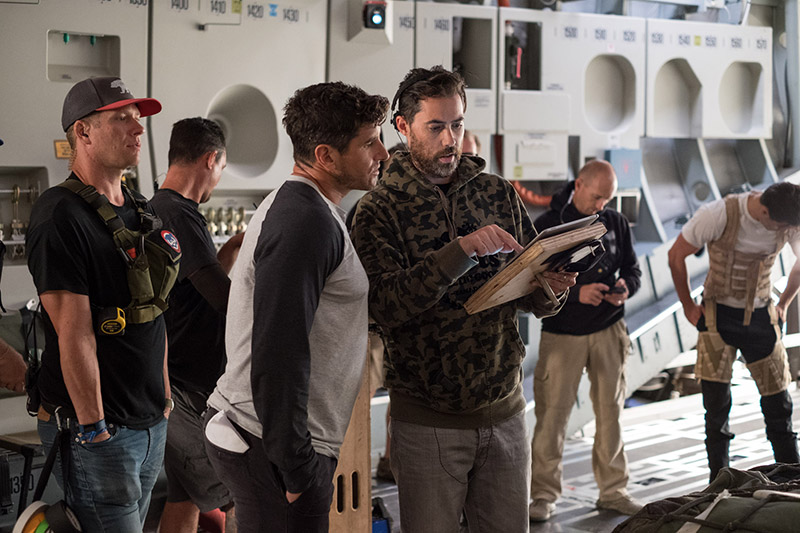 GETTING HIS START & THE ROLE OF THE CFC

Peyton attended the Cineplex Film Program in 2001. After attending film school, he still wanted to be challenged, so he was encouraged to apply for the Directors’ Lab, “Other places didn’t elevate your craft as a director like the CFC did, and being a storyteller and director was all that I was interested in doing,” Peyton explains. “The CFC caters to people with that kind of drive and ambition.” He was one of eight filmmakers that year selected to participate in the Directors’ Lab, alongside fellow director residents Sarah Polley and Charles Officer.

“My biggest take away [from my time at the CFC] was that I could actually succeed, but in order to do what I wanted to do and make the sort of films I wanted to make, I was going to have to work incredibly hard,” Peyton continues. “The amount of time and energy the CFC demanded you invest required me to push myself.”

So that’s what Peyton did. After completing the Directors’ Lab, he continued to push himself and hone his filmmaking skills by writing and directing his CFC black comedy short,
Evelyn: The Cutest Evil Dead Girl, which stars CFC alumna Nadia Litz and is produced by CFC alumnus Jim Mauro. This film would ultimately garner significant critical acclaim and attention for Peyton – both in Canada and in Hollywood. Peyton credits the film with helping him build his career as a filmmaker. “It [the film] showed that I could direct and tell a unique story and that short led to film festival experiences and awards and eventually it all led to me signing a lawyer and agent in Los Angeles,” explains Peyton. “But it also ushered me into the Hollywood film industry at large where I started to meet people like Tom Hanks and work for the various studios.” 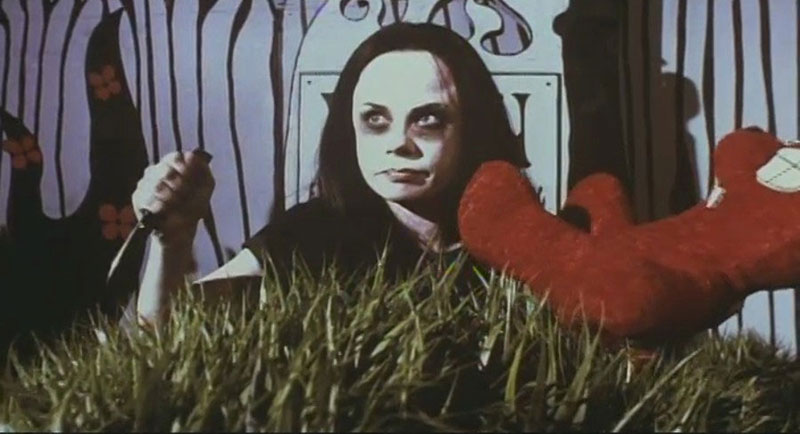 After leaving the CFC, Peyton went on to produce his CBC claymation series
What It’s Like Being Alone (2006). In 2010, he made his feature directorial debut with an $85 million budget studio film, Cats & Dogs: The Revenge of Kitty Galore, and began establishing himself as an exciting new Hollywood director.

“Other places didn’t really look to elevate your craft as a director like the CFC did, and being a storyteller and director was all that I was interested in doing. The CFC caters to people with that kind of drive and ambition.”

FROM GANDER TO HOLLYWOOD

Once Peyton established himself in Hollywood, there was no turning back. He landed the action adventure film
Journey 2: The Mysterious Island in 2012, which was his first collaboration with Johnson. Peyton explains that his working relationship with Johnson developed very naturally and very slowly. “With Dwayne and most stars – I’m pretty shy to start but what always cuts through to all actors and people I work with is my work ethic. I am there to make them look good and make the best movie possible. I don’t have any other agendas. So I generally bond with other people on a creative level where we can share the same goals and ambitions.”

Peyton undoubtedly made a good impression on Johnson, as they have collaborated on three films to date – and hopefully more in the future (we’re still waiting on a
San Andreas sequel!). While Peyton loves working on action and adventure films, he is focused on creating elevated genre material more generally. “I started a company [ASAP Entertainment] with [producer] Jeff Fierson and we look to do science fiction, fantasy, action and a little bit of horror, but it’s really about using the genres to discuss topics that are sometimes difficult to discuss, but do it in an entertaining way,” shared Peyton. “That’s what great genre stories do. I’m basically focusing on what I’ve always loved – now that I feel like I’ve proven I can handle the biggest budgets and most complex production demands.”

“I’m basically focusing on what I’ve always loved – now that I feel like I’ve proven I can handle the biggest budgets and most complex production demands.”

Peyton’s journey to earn the freedom to work on projects he’s truly passionate about wasn’t an easy one. “My career was full of very steep learning curves and lots of bouts of hair loss from stress. But at the end of the day if you love it and are driven to succeed – you work through it and figure it out,” says Peyton. One of the biggest challenges he’s faced in the entertainment industry is getting really nervous or anxious about meetings, “I actually don’t love talking to large groups, which is part of the role of a director,” reveals Peyton. “I just love making movies. Talking and presenting – I’m not a showman. But at the end of the day – I believe in my POV and work, so I usually push through. But I’ve probably had a spectacularly bad meeting here and there. Life goes on. The people that know me know I get nervous because I just care a lot about what I do.”

Besides pushing through tough situations, Peyton has the following advice to share with young creators who are at the beginning of their journey: “Follow your passion. Work harder than you think anyone else is working. Don’t be afraid to adjust and change but use your gut when you can – it rarely lies to you. And when things get hard remind yourself why you do it – and focus on what you love.” 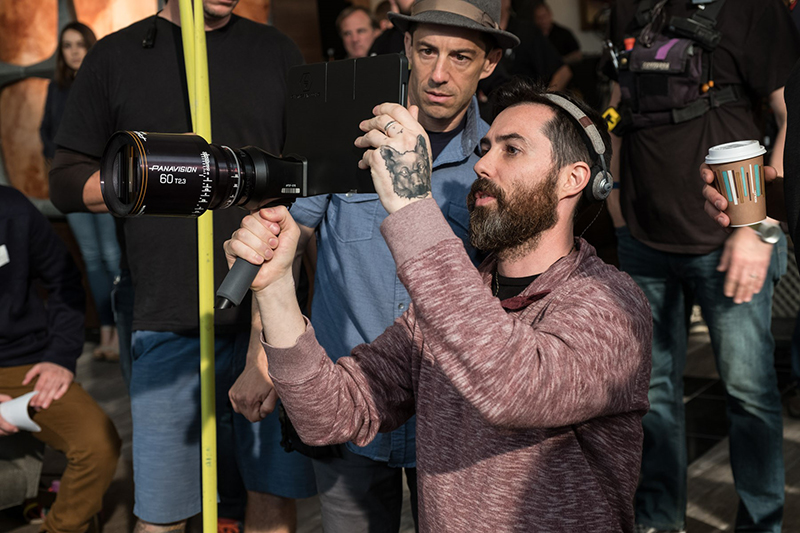 So what’s next for Peyton? As a producer he’s wrapping up Jason Momoa’s next film,
Sweet Girl, and has a number of TV and feature films he’s setting up. As a director, he has a movie he’s very close to finalizing with Netflix, and he’s been approached with a few other scripts to read. Peyton has a lot on the go, and his career is constantly changing and evolving, “It’s always complex with movies that have budgets over $100 million, because it takes the stars aligning to get them to go,” explains Peyton. “It’s a long process that demands patience and hard work – but I feel the finish line coming. So I can actually go start directing.”

“Follow your passion. Work harder than you think anyone else is working. Don’t be afraid to adjust and change but use your gut when you can – it rarely lies to you. And when things get hard remind yourself why you do it – and focus on what you love.”

Update on March 10, 2020: Due to the evolving public health concerns around COVID-19, we decided to postpone our annual reception in Los Angeles. We look forward to celebrating Brad’s accomplishments and presenting him with the 2020 CFC Award for Creative Excellence in the coming months. Please stay tuned for updates.

This article has been edited and condensed for publication.