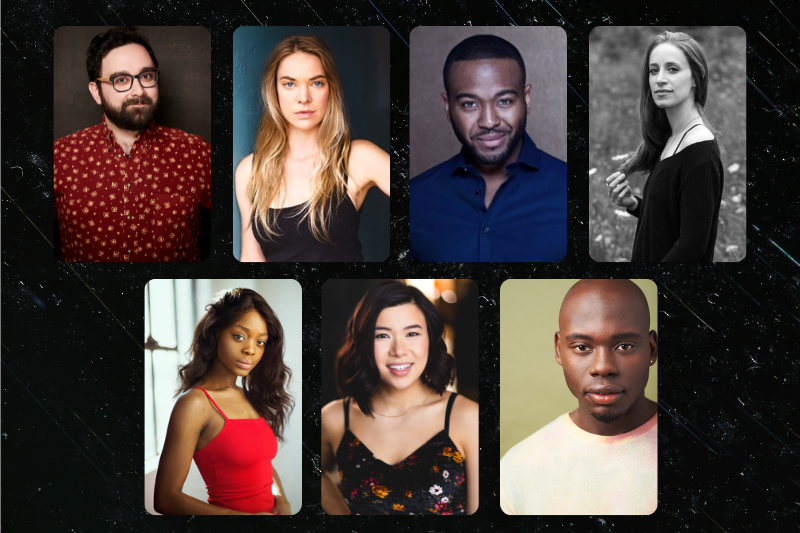 After a year-long hiatus (we’re looking at you, COVID), we are thrilled to announce that the
CBC Actors Conservatory is back! We’re so pleased to welcome seven talented and versatile actors into the 2021 conservatory, which officially gets underway on Tuesday, September 7.

“We are incredibly proud of this program and our continued partnership with the CFC to champion Canadian actors,” said
Sally Catto, General Manager, Entertainment, Factual & Sports, CBC. “CBC is committed to developing and nurturing creative talent in Canada, and the Actors Conservatory continues to empower emerging talent to flourish and succeed at home and around the world. Congratulations to this year’s residents!”

The CBC Actors Conservatory is an immersive onscreen acting program designed to empower actors to navigate the film and TV business by exposing them to different approaches, perspectives, collaborators and materials. This unique program expands an actor’s skill set, artistic confidence, creative community and career opportunities.

“I’m excited by this incoming group of actors and look forward to welcoming them to the CFC,” shared maxine bailey, Executive Director, CFC. “They are talented creators with interesting and unique voices, and we’re thrilled to help them bring their stories to life.”

“We are so thankful for the continued support of our amazing program partners – partners who share our passion for all things Canadian and are deeply committed to helping Canadian actors achieve global relevance,” added
Kathryn Emslie, Executive Lead, Programs, CFC.

Thanks to the generous support of our program partners,
CBC, the RBC Emerging Artists Project and the Government of Ontario, the conservatory has launched 90 actors to date who are landing impactful roles and are breaking out internationally – like Eli Goree in One Night in Miami, Devery Jacobs in Reservation Dogs, Annie Murphy in Schitt’s Creek and Kevin Can F*** Himself, Humberly González in Ginny & Georgia, Jade Hassouné in Shadowhunters and 2021 TIFF Rising Star Thomas Antony Olajide in TIFF ‘21 Official Selection Learn to Swim, to name a few.

Meet the 2021 CBC Actors Conservatory residents below and read about recent onscreen performances that have inspired them.

Blessing is an actor and writer. Her training includes the Ryerson School of Performance and the American Musical and Dramatic Academy. Onscreen credits include
Pretty Hard Cases (CBC), Nurses (Global) and a recurring role on The Wedding Planners (Citytv). Blessing’s onscreen theatre and live performance experience include ‘Eos’ in The Odyssey, ‘Olga’ in The Women (Ryerson Theatre), ‘Valentina’ in One Day (Red Door Shelter) and Off My Chest (Theatre Born Between). Since graduating from Ryerson, Blessing has performed in Vietnam, Australia and the U.S.

“I’ve been re-watching a lot of my favourite shows for comfort. So in turn, I’m rediscovering some really amazing performances. Bellamy Young in ‘Scandal’ is absolutely breathtaking to watch. When you’re playing against an actress like Kerry Washington you really have to be able to hold your own and she absolutely does. She is captivating and devastating to watch in the role. It’s incredible to watch her take a character that had been painted as a villain, a diva, b*tch and bring such humanity, vulnerability, and depth to her. Her work is fully fledged and nuanced and I re-watch her scenes over and over again.”

Christef Desir is a Dora-nominated Haitian-Canadian actor. He is an alumnus of the Soulpepper Academy and has performed on stage in the plays
The Royale (Soulpepper), Dry Powder (Evermore), and The Last Days of Judas Iscariot (Unit102). He is currently developing a play with Outside the March and recently finished shooting Learn to Swim (TIFF ’21), from writer-director and CFC alumnus Thyrone Tommy.

“I would have to say Michaela Cool in ‘I May Destroy You.’ Michaela’s performance in that show was simply breathtaking and original. Her onscreen presence is completely unconventional and all of her character notes and choices rang completely true. Her ability to maneuver this important subject matter with discipline and yet have so much humour in her performance left me in awe. It is a very special achievement because I can’t see anyone else playing this role. She is unapologetically herself in this role and that is a state all of us actors strive for.”

Izad Etemadi is an Iranian-Canadian actor, writer and comedian from Victoria, BC. After relocating to Toronto, he received the Emerging Queer Artist award from Buddies in Bad Times Theatre. His select film/TV credits include
Overlord and the Underwoods (CBC/Nickelodeon), TallBoyz (CBC), Odd Squad (PBS Kids) and Bajillionaires (Family Channel). He’s toured and performed his critically acclaimed solo shows across the country and is currently developing his new comedy special, Say My Name, in residency with Green Light Arts. Izad’s work uses comedy to explore queer identity, immigration, and the terrors of being a millennial.

“It’s hard to choose just one because there’s been so many incredible performances as of late, but the most recent one that’s really stuck with me is Jennifer Coolidge as Tanya in ‘The White Lotus.’ Step aside Streep, Coolidge is coming for your gig. The entire show was brilliant, but her performance was particularly captivating. She took me on such an unexpected emotional rollercoaster. Her character was depressing, disturbing, deeply insecure and uncomfortable, yet she always found a way to keep things hilarious. I was waiting for her to snap the entire time and when she finally did it was everything – and then some. It was also really refreshing and exciting to see the performer we’ve dubbed “Stiflers Mom” give us such a grounded and nuanced performance. She stole the show. Someone please give her an Oscar for this TV performance.”

After graduating from Queen’s University, Katherine began her training in New York at Atlantic Acting School. Once back home in Toronto, she performed in the Second City conservatory and co-founded the popular comedy troupe Not Oasis. Her recent credits include
Suits, Murdoch Mysteries, and the lead in The Dancing Dogs of Dombrova, which won Best Feature at the 2019 Canadian Film Festival and netted Katherine a Best Actress Award at AFMX the same year. Select additional credits include a comedic turn in the film Little Black Dress, and the lead in Russet Season (dir. Sheila McCarthy).

“Rose Byrne in ‘Physical’! How hard she fights to keep her internal chaos so tightly contained… Watching her win big and lose bigger… So much vulnerability in such an outwardly impenetrable woman. It was so exciting to watch!!”

Zara is an actor and graduate of the musical theatre program at the Etobicoke School of the Arts, in addition to McGill University and George Brown Theatre School. She spent two years at the Stratford Festival, where she was also part of the Birmingham Conservatory for Classical Theatre. Zara’s select theatre credits include ‘Alicia’ in
Small Mouth Sounds (Segal Centre), ‘Titania’ in A Midsummer Night’s Dream (Shakespeare BASH’d), ‘Miss Mabel Chiltern’ in An Ideal Husband, ‘Lucius’ in Julius Caesar (Stratford Festival), and ‘Sally’ in The 4th Graders Present an Unnamed Love Suicide (Tiny Room). Her film and TV credits include the lead in dystopian independent feature The Discarded, webseries The Wonderful, and Hudson & Rex (Citytv).

“Carey Mulligan’s performance in ‘Promising Young Woman’ is one I am still thinking about today. The movie as a whole is one I think I will be thinking about for some time. Mulligan so movingly depicted the anger, frustration, and determination of someone who has ever suffered through unconceivable loss and tried to seek revenge in any way they know how. While quite stylized as a movie, her single-mindedness in trying to expose the double standards at play in our institutions and society at large was incredibly relatable and extremely satisfying to see on screen. It felt refreshing to see such indifference to being liked or having any other ambitions.”

Janet-Rose Nguyen is an award-winning actress and writer. Her work explores magic, horror, feminism, queerness, and the Asian diaspora. She is the co-chair of the ACTRA Diversity & Inclusion committee, an alumna of the Reelworld Emerging 20 Program, and most recently served on the Bursary committee of Firefly Creative Writing. Janet-Rose is completing her Screenwriting and Creative Writing degree at York University. You can see her most recently in
Workin’ Moms (CBC) and the pilot Dream Date.

“An onscreen performance that most recently inspired me was on HBO’s ‘Watchmen.’ The whole cast blew me away with their commitment to the characters and how perfectly they fit their roles. I specifically was inspired by Hong Chau’s performance as Lady Trieu, as she was amazing in her portrayal of a genius villain by keeping the humour in her character and her motivations of the character came through clearly. Also, because she is a Vietnamese actress, getting to see her as a main character with her own motivations, multifaceted story, and talent, with her heritage as part of the story on a huge TV show, was truly inspiring to me as an artist and gave me hope for the future diversity and inclusion of the film industry!”

Leighton Alexander Williams is a Toronto-based stage and screen actor, writer and director. He’s a graduate of York University’s Acting Conservatory, and has spent the past six years creating bold thought-provoking work. He is a co-founder of BDB Productions Inc., and his recent adaptation,
Judas Noir, earned him his first Dora nomination (Best Ensemble) and Toronto Critics Pick nomination (Outstanding Supporting Performance). He wrote and stars in the short film Residue, which is available on CBC Gem.

“I watched Ryan Murphy’s ‘Halston’ on Netflix, and I must say — Ewan McGregor’s work was riveting. His character nuance, voice work, and emotional depth amalgamated into a stellar performance. I love the freedom he had with his voice. It’s challenging to make eccentric characters feel believable; yet, he was super successful in doing so. I’m always looking to work on my vocal range as an actor, and watching Ewan’s work has inspired me to really get creative in building character voices.”