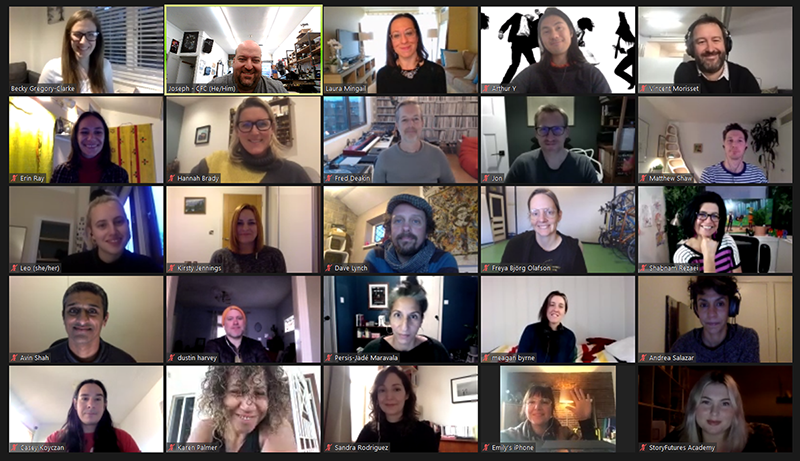 Artists are nothing if not resourceful. COVID-19 may have put everyone’s plans on hold, but imaginative thinkers have always come up with creative ways to overcome their limitations.

That innovative spirit is now fuelling the UK-Canada Immersive Exchange, which kicked off in November 2020. The ongoing program is intended to give Canadian artists an opportunity to share and develop new ideas with their counterparts from the United Kingdom, and is being organized by the Canada Media Fund and the Canada Council for the Arts in collaboration with CFC Media Lab, StoryFutures Academy, the National Centre for Immersive Storytelling (run by National Film and TV School and Royal Holloway, University of London) and Arts Council England in the UK.

The problem, of course, is that geography proved to be a bigger obstacle than expected. The organizers started planning the UK-Canada Immersive Exchange in the fall of 2019, ahead of anticipated launch in February 2020. At the time, the program was supposed to be a travel exchange that would send the participants across the ocean to see one another in person.

Those plans had to change once lockdowns were put into place. However, it did provide the organizers with an unprecedented opportunity. While artists are always pushing boundaries, audiences often gravitate toward content that feels comfortable. That can change during a period of transition. A sudden upheaval like a pandemic makes audiences more receptive to ideas that they previously wouldn’t have considered, and that allows artists to take chances that wouldn’t have been available to them in normal circumstances.

Avin Shah, for instance, is a writer and actor based in the UK, and found that people were more willing to listen to his pitches for at-home experiences now that everyone is working remotely.

“Reaching out to contacts has borne fruit, because people were at home and eager to communicate,” Shah said. “Before, I’d rarely get a response at all. People just didn’t get it.”

That philosophy has infused the entire program, which was revamped as a virtual enterprise. The UK-Canada Immersive Exchange has brought two 12-person delegations (selected from a highly competitive group of nearly 500 applicants) together for a series of digital talks, breakout sessions, and virtual reality team-ups that will culminate with pitches for new immersive media projects in March 2021. Each pitch must be a UK-Canada collaboration, and the six best will receive funding (from a total pool of $500,000) to deliver a finished project by late 2021.

The challenge was figuring out how to simulate the feel of an in-person event when no one is able to be in the same room, since many of the more common solutions aren’t as effective in a creative context. Artistic production is a tactile endeavor. Video conferencing allows people to see one another, but does not necessarily support more meaningful hands-on development.

“Everyone is burnt out on video calls,” said Meagan Byrne, an Indigenous game developer and interactive media artist whose work has been exhibited all over Canada. “[COVID] has removed the ability to have spontaneous conversations, which is what helps the most when creating connections. I can’t just say something aside to someone, I have to say it to the whole group.”

In other words, it’s tough to have a real conversation (and build trust) when five people are talking over one another in a gallery. The discussion doesn’t have the same flow, and a lot of good ideas never get shared because people are trying not to get off track.

Thankfully, the challenge – to create immersive artistic works using new technologies – also presented the organizers with a solution. While the participants were invited to some more traditional video chats, some of the sessions took place in virtual reality. That allowed them to collapse the distance and give people the sense that they were meeting face-to-face.

“Being in the same 3D space gives a level of agency that isn’t possible otherwise,” said Rachael Hosein, the Chief Creative Officer of Winnipeg’s Flipside XR, which specializes in real-time animated content. “Once you get over the disconnect, XR allows you to feel the presence of another person in way that is very different from a phone call or video chat.”

“You’re able to interpret their body language and other traits that can assist with communicating their ideas,” added Casey Koyczan, an Indigenous artist based in Yellowknife. 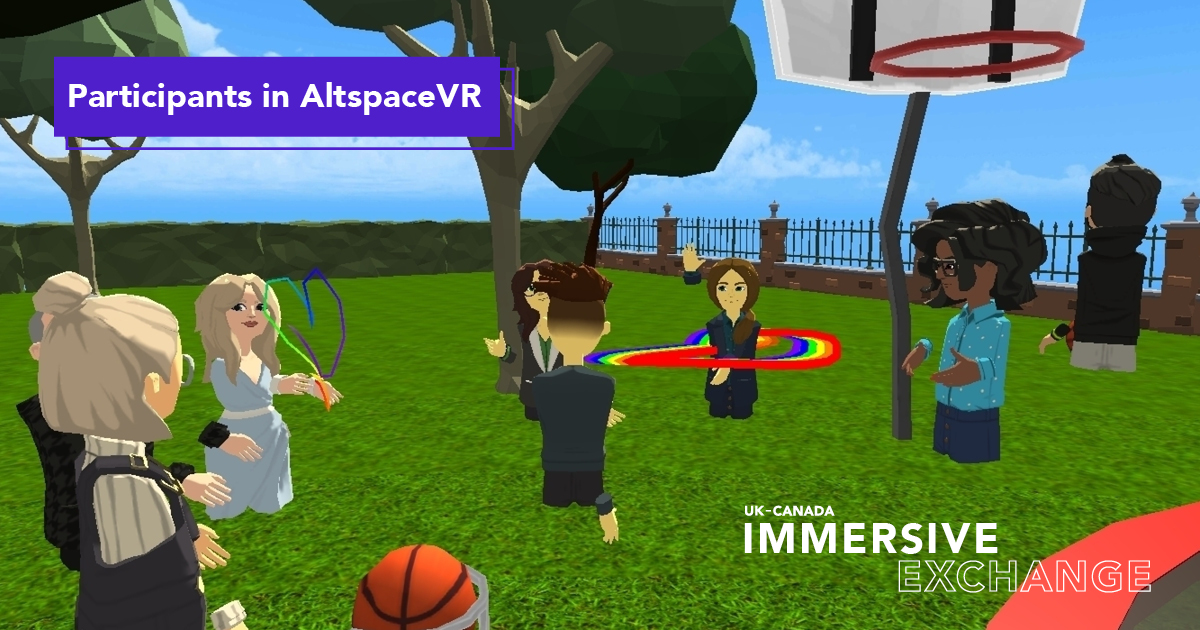 As far as the participants are concerned, that template should serve as a model for people in other industries.

“This program has introduced me to a side of VR I was not familiar with,” said Shabnam Rezaei, one of the Co-Founders of Big Bad Boo Studios and a member of the Canadian delegation. “I can see how VR can be used when people can’t travel and I can see a shift of how we work given these new technologies. We just need to ensure that more people use it.”

“This has offered a space where creativity can blossom and offered a structured approach to developing new partnerships,” said Hannah Brady, who acts as producer for the UK-based arts organization Squidsoup. “We should be looking beyond the pandemic and looking to these technologies to create best practice for remote collaboration.”

In that regard, the actual process of the UK-Canada Immersive Exchange speaks to its innovative potential. The program was put together in the belief that how people use technology is just as important as what that tech can do, since the ‘how’ is what makes tech resonate in people’s everyday lives. In plain terms, that means that art drives technological and social innovation just as frequently as it responds to it.

With that in mind, both the immersive projects that come out of the Exchange, and the XR process that was used to create them, could have a transformative impact on a world still struggling to deal with the effects of COVID-19. In fact, XR projects may be uniquely suited to the current environment, since artists that had to overcome distance to create a work of art could produce something that connects with an audience that is just as far apart.

“XR gives you the ability to be part of the story, to affect it, to be immersed in it, and to experience it,” Hosein continued. “It is creating a new type of entertainment that borders the line between story-based content like TV or movies and gaming. Viewers are now characters which creates a deep level of investment in a piece of content.”

The UK-Canada Immersive Exchange has simply given like-minded individuals a chance to workshop some of those concepts, and to take full advantage of the latest gadgets.

“I finally found people who value the blend of art and technology,” Shah said, who is now working on a new project with Hosein and Flipside XR. “Up until now I’ve been a career actor/writer who graduated academically as an engineer. Neither of those creative industries value my technical skills. In fact, I’d found that I must ‘dumb down’ in order to avoid conflict.”

“[XR] has enabled me to adapt my existing story content from audio to VR, which is a much more suitable medium for these stories.”

The goal of the program, then, is to help artists realize those creative possibilities. People know what XR can do in the most literal sense, but working with the technology can open up new lines of thinking, leading to solutions that would not have been possible in a different setting. That could influence the trajectory of artistic design well beyond the pandemic, and well beyond the confines of creative industries. For example, Canadian delegate Sandra Rodriguez found that the lessons learned from the UK delegation have allowed her to refine a live performance piece that her team was working on prior to the program.

“Because of COVID-19 we had to create a prototype that we could try at home. This actually helped the project,” explained Rodriguez, who teaches a course on immersive media creation as a visiting scholar at MIT in addition to her work as a creative director. “Working at a distance forced us to think of flexible, scalable formats that can be made reality.”

Koyczan and Hosein similarly credited the program for helping them escape the North American bubble, which tends to view VR as a gaming platform. While UK delegates like Shah appreciated Canada’s emphasis on story, the Canadian representatives appreciated the UK’s hybrid approach and use of digital technology during live events. That broader experience will leave both UK and Canadian artists better prepared for a world in which XR technology is far more accessible and far more common than it is now.

“I’ve learned so much about VR and it’s been great to see the facilitators taking our feedback and providing educational materials that cater to those points of interest,” Koyczan said.

“The immersive industry is going to explode in the next three years,” Hosein concluded. “With the support from programs like the UK-Canada Immersive Exchange, creators can start making use of this technology to explore new ways to connect, create, and be entertained.”

The participants will be drawing on all of those lessons as they put together their pitches for March. Regardless of the outcome, the ultimate takeaway is that entertainment has always been more than a diversion. XR technology allows people to send information across great distances, and that makes it easier to come together and thrive during times of crisis. 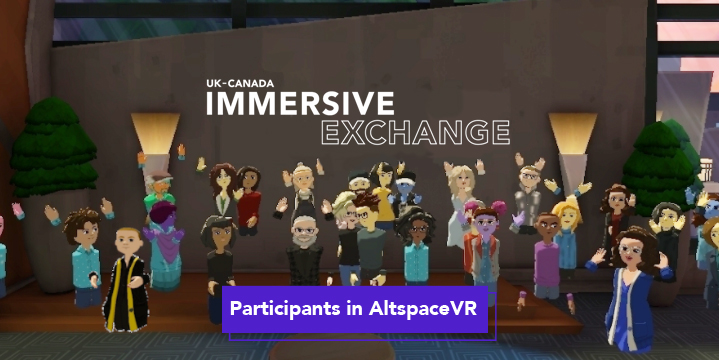