We are pleased to welcome Shannon Masters as the fifth member of The Alumni Advisory.

Please note: CFC’s Town Hall is being rescheduled ideally for late February/early March 2021, as The Alumni Advisory continues its consultations with CFC’s Black, Indigenous and Racialized alumni on the focus and framework of the Town Hall, and we finalize our search for facilitators. More information coming soon.

Lea Marin is an award-winning Toronto-based producer with more than 20 years of experience. A graduate of the Canadian Film Centre’s Producers’ Lab, Lea joined the National Film Board of Canada as a producer in 2006.

Throughout her career, she has produced dramatic, documentary, and interactive works, but the core of her projects centre on social issue documentaries that highlight the lived of experiences of those whose stories are often neglected in the mainstream. A fierce advocate for racial equity, Lea is committed to building pathways, and creating space for BIPOC and diverse filmmakers in the industry.

Her most recent film credits include Michele Stephenson’s Stateless; Astra Taylor’s What Is Democracy?; and Charles Officer’s Unarmed Verses. Lea’s additional credits include Chelsea McMullan’s My Prairie Home and The Portrait, directed by Oscar-nominated filmmaker Hubert Davis. She is presently in post-production on Throat, a co-collaboration between Chelsea McMullan and artist/activist Tanya Tagaq.

Lea sits on the Board for the Regent Park Film Festival, as well as advisory committees for the Racial Equity Media Collective, Black Women Film Canada, and Sheridan College's Film & Television Program. She has participated as a panelist, mentor, moderator and juror for various International festivals and institutions, including TIFF, HOT DOCS, Black Women Film Canada, ImagineNative, Reel World Film Festival, POV 3rd Street, and the Documentary Organization of Canada.

Cara Ricketts is an award-winning actress with more than 15 years of experience. Cara’s work and advocacy, or rather advocacy-through-work, is a major part of her career. From being born and raised at Jane and Finch in Toronto, to gracing the Broadway stage, she has had varied experiences and is accustomed to facing, and breaking, barriers.

After completing her training in theatre performance at Humber College, Cara began to work in the Toronto theatre scene in shows such asA Raisin in the Sun (Soulpepper Theatre Company) andA Midsummer Night's Dream (High Park), before joining the Stratford Festival, where she spent four years training, performing classical plays and being a proud member of colour in the newly diversified company at that time. During her time with the Stratford Festival, Cara undertook the part of ‘Portia’ in Julius Caesar, ‘Ruth’ inThe Homecoming and ‘Imogen' inCymbeline, before playing 'Roxanne' in Cyrano for the Pacific Conservatory Theatre in Santa Maria, California.

Cara’s film and television credits include The Gathering,The Book of Negroes, Orphan Black, Titans, Law and Order: SVU, Street Legal and Anne with an E, for which she received ACTRA’s Outstanding Performance Award for her portrayal of 'Mary LaCroix'. Her additional credits include The Wild Party (The Musical Stage Company), Time and The Conways (Roundabout Theater), the Far Cry franchise (Ubisoft), Assassin's Creed Odyssey and Hyperscape.

Cory Bowles is a multidisciplinary artist from Nova Scotia, Canada. Most known for “Cory” in the TV series Trailer Park Boys, he currently serves as a director, receiving a nomination for the 2016 DGC award for Outstanding Direction in a comedy series.

As principal choreographer and director of the companies Verve Mwendo Dance, and Black Rabbit Entertainment, he has created over 70 works/choreographies for stage and film. As a musician he has scored for film, appeared and recorded over a dozen releases, earning him a nomination in the inaugural Hip Hop/Urban category in the East Coast Music Awards. He has also composed for Dance companies, SINS, MOCEAN, and Decidedly Jazz Danceworks in Calgary where he returned in 2017 for an ambitious collaboration and adaptation of Romeo and Juliet.

Cory was Director of Choreography for the CBC KIDS show The Mobiles, director of the award-winning CBC mini-series Studio Black!, Diggstown, and is a writer for the CBC comedy, Little Dog (2018). After making a number of short films, his first feature film Black Cop (2017) premiered at the Toronto International Film festival, was a special presentation by The Historic Black Police Precinct in Miami Florida. and went on to earn Best Canadian Feature at the 2017 Vancouver International Film Festival, Best Narrative Feature at the St. Louis International Film Festival and a Canadian Screen Award (John Dunning Discovery Prize), The Screen Nova Scotia Award for Best Feature. In 2018, Cory was nominated for Nova Scotia’s highest arts prize, the Lieutenant Governor’s Masterworks Award.

Additionally, Shannon was a writer in the four-month 2016 Entertainment One Talent Incubator; Creative Advisor for the Inaugural 2014 ImagineNative Feature Script Development Lab; 2013 Shaw Media Writers Apprentice; participant of the 2012 WGC Bell Media’s Diverse Screenwriters Program; the first International participant of the 2008 Tribeca All Access program in New York; recipient of the Spring 2007 Praxis Centre for Screenwriters Fellowship; and is a graduate of the CFC’s 2005 Film Program Writers' Lab.

Produced in 2012, Shannon’s feature Empire of Dirt began its festival run at TIFF 2013. That same year, Shannon was nominated and won the CSA for Best Original Screenplay. She currently has a feature film and two television series in development. Originally from Saskatchewan, Shannon is mixed Cree, Métis and Ukrainian.

WHY ESTABLISH THE ALUMNI ADVISORY?

The CFC recognizes and acknowledges that there have been, and currently are, aspects of our organization, our programs and our offerings that have replicated the systemic inequalities inherent in our screen-based industry. As part of CFC’s Commitment to Change and Anti-Racism, we will be making tangible changes to all aspects of our organization – to make it better, safer, more empowering and more inclusive of Black, Indigenous and People of Colour – and to advocate for and affect change within our industry at large.

A key part of this commitment is the engagement of our racialized alumni to ensure their experiences, perspectives and voices will inform the CFC’s priorities for change and action plans moving forward. Given that alumni experiences vary across programs, disciplines and years, we decided to take a multi-pronged approach to alumni engagement.

WHAT IS THE ALUMNI ADVISORY?

The Alumni Advisory is a strategic advisory group that works closely and collaboratively with the CFC’s Program Executive Team to set strategic priorities and action plans relating to the CFC’s Commitment to Change and Anti-Racism. The Advisory will:

The Advisory roles will be rotating and will be comprised of five (5) alumni members, including the Chair, along with CFC’s Program Executive Team.

The Advisory will be a permanent component of the CFC’s ongoing strategic process, with a specific focus on taking a broader look at the CFC experience for racialized and other marginalized talent, as opposed to the micro aspects of a program’s specific design or delivery.

Regular updates will be provided on our progress as we work together to map out how the CFC functions to combat systemic racism, to be an agent of change in our industry, and a real partner to our diverse creative communities.

Here’s what we’re looking for around the table:

Members are asked to make a one-year commitment to The Alumni Advisory, and will be contracted and paid for a one year, part-time commitment. Advisory members will rotate from year to year with ideally two members remaining on for a second term to help with continuity.

We are rotating members because we see this as another point of meaningful engagement with our mid-senior level alumni, outside of the board, and to allow for change to include an expanding array of our alumni as we move forward.

The one-year commitment begins from the time the advisory is formally established.

More specific updates, steps and timelines will be shared as we move forward. 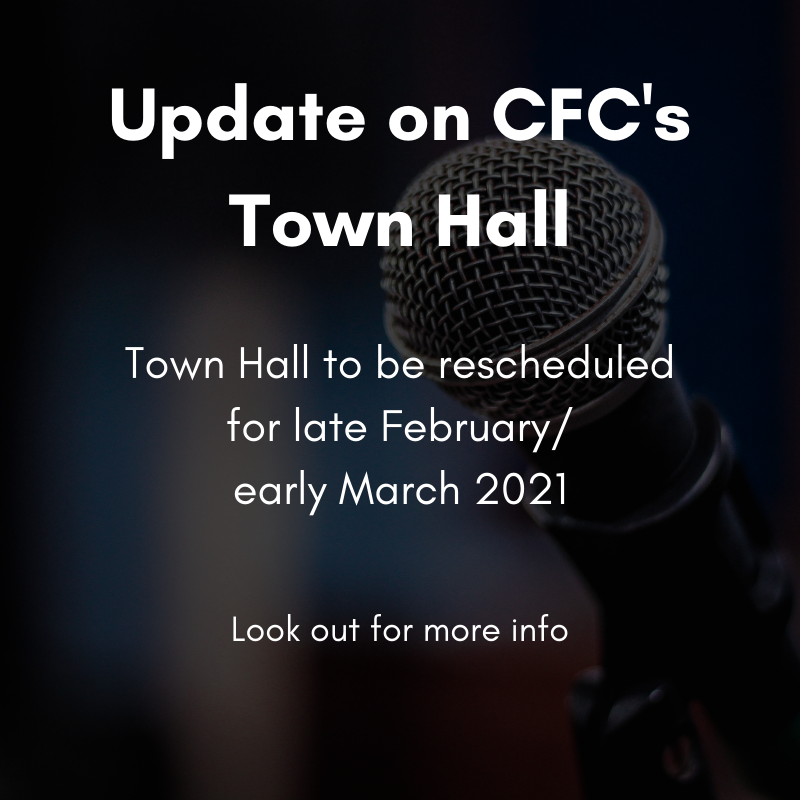