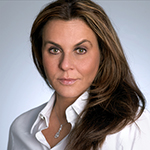 Robin Mirsky joined Rogers Communications in 1989. She was responsible for the Rogers Telefund, the interim financing fund established by Rogers in 1980 to assist in the production of high-quality Canadian programming. Today, Rogers Telefund has approximately $33 million available for bridge financing and has committed in excess of $330 million to hundreds of Canadian programs. Much of the success of Rogers Telefund can be attributed to Mirsky's dedication and her understanding and support of the industry. Under her guidance, the Telefund expanded its interim loans to include feature films as well as television programming. Mirsky was also was instrumental in setting up the Rogers Documentary Fund established in 1996 by Rogers to foster the growth and creation of Canadian documentaries. To date, this fund has given grants, totalling more than $24 million, to more than 500 original, provocative and revealing documentary films. Mirsky is also responsible for the Rogers Cable Network Fund; an equity investment fund created to help develop the kind of specialized and original programming which Canadian cable channels need, in order to increase the number of distinctive program choices Canadian audiences want and expect. The Rogers Cable Network Fund will support the independent production of first play cable network programming. To date, the fund has invested more than $86 million in more than 400 projects. In addition to the day-to-day management of Rogers Telefund and Rogers Documentary and Cable Network Fund, Mirsky has provided strategic input into a number of successful filings by Rogers to the CRTC. Additionally, she is very active in the telecommunications and screen entertainment industries; she is currently Co-Chair of the Hot Docs Documentary Festival Board of Directors, and Vice-Chairman of the Academy of Canadian Cinema and Television board of directors. She also sits on the Boards of the Banff World Media Festival and The Canadian Film Centre (CFC).