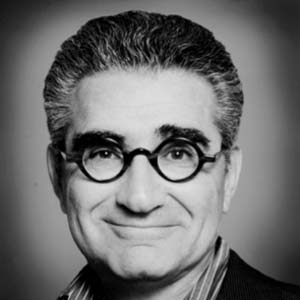 Eugene Levy has appeared in over fifty motion pictures, eight having topped the one hundred million dollar mark. His box office success in films like Bringing Down the House, Cheaper by the Dozen 2, Father of the Bride 2 and Over the Hedge has helped establish him as one of Hollywood's most popular comedic character actors. It was his role as Jim’s dad in American Pie and its sequels that cemented his reputation as being America’s favourite dad. Levy started his career on the popular late night comedy series SCTV where he won two Emmy Awards for writing. His early films include Splash, Club Paradise, Armed and Dangerous and Multiplicity. Teaming up with Christopher Guest, Levy earned critical acclaim for co-writing and co-starring in Best in Show, Waiting for Guffman, For Your Consideration and A Mighty Wind. His work in A Mighty Wind garnered him a Grammy Award and a New York Film Critics Circle Award along with a Golden Globe nomination for Best in Show. Most recently, Levy has appeared in the Ang Lee film Taking Woodstock, provided the voice of Albert Einstein in Night at the Museum 2: Battle of the Smithsonian, and co-starred alongside Nicolas Cage and Samuel L. Jackson in the animated feature Astro Boy.