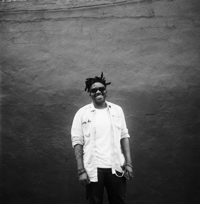 Tiona McClodden is a visual artist and filmmaker whose work explores and critiques issues at the intersections of race, gender, sexuality, and social commentary. Themes examined in McClodden's films and works have been re-memory and more recently narrative biomythography, and shared ideas, values, and beliefs within the African Diaspora-what she calls, “Black mentifact”. Her work is interested in Blackness and exploring intersubjectivities within Black communities as a tool for creating insider perspectives within film, time based works, and objects.