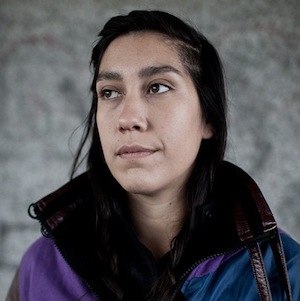 Angela is a theatre creator from Kahnawake, Quebec, with roots in musical theatre and youth theatre animation. Having received training at Concordia University’s Theatre program, and at The Centre for Indigenous Theatre, Angela has honed her performance and creation skills through multiple collectively created projects. She has worked with Clay and Paper Theatre and Shadowland Theatre, as an outdoor performer and focuses opportunities with community based productions. She recently wrote, directed, designed, and performed in the cultural and music collective Yamantaka//Sonic Titan's first fully staged “Noh-Wave” opera at Buddies in Bad Time’s Theatre’s Rhubarb Festival, and then at Pop Montreal. As a playwright, she is currently involved with Cahoots Theatre’s Hothouse playwrights unit, completing her script “Hoofs”, a contemporary Iroquois transformation myth, which had previously received a staged reading at Native Earth’s Weesageechuk begins to Dance Festival in 2011. As a cultural researcher, she has participated in the Smithsonian’s National Museum of the American Indian’s Artist Leadership Program, and as a visual artist, she recently completed a work entitled “Cult of Kateri: Armour and Accessories”. She is currently conducting interview research to develop a verbatim documentary performance about Idle No More.