Kate and Mim-Mim from creators and showrunners Scott & Julie Stewart

Don't Dumb It Down! with Michael Vogel

The WildBrain Experience is a suite of offerings designed to introduce CFC talent and creators to the vibrant kids, tween and family market and to inspire them to create kid- and family-targeted content. Comprised of forums, in-depth workshops, project bootcamps and pitching exercises, the WildBrain Experience aims to explore different creative processes and best practices; foster the development of new projects destined for the kids, tween and family market; broker new creative and business opportunities; and offer access to key industry professionals, mentors and creative leaders working in this space.

For any additional questions concerning The WildBrain Experience, or if you are interested in learning more about our next public offering, please email programs@cfccreates.com.

ACCESSIBILITY FOR ONTARIANS WITH DISABILITIES ACT

Don't Dumb It Down! with Michael Vogel 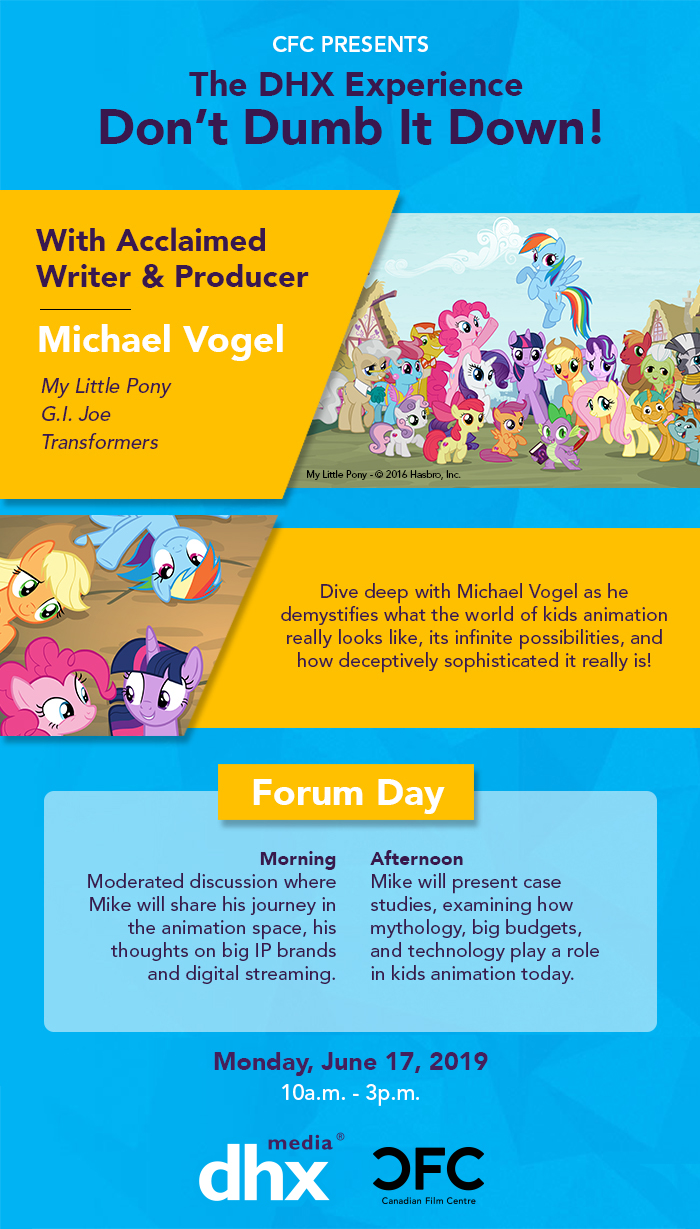 On June 17, 2019 the CFC presented "The DHX Experience: Don’t Dumb It Down", a full-day forum with acclaimed writer and producer, Michael Vogel. The day focused on demystifying what the world of kids animation really looks like, its infinite possibilities, its deceptively sophisticated approach, and the creative, commercial and educational impact it has worldwide.

IN CONVERSATION WITH MICHAEL VOGEL

The morning consisted of a discussion with Vogel, moderated by DHX Media's EVP of Content, Stephanie Betts, on his extensive background in kids animation, his thoughts on what the art of animation allows you to do as a creator, how it is different than live action, the mythology that underpins good animation, how animation can be appealing for both kids and adults, and some common pre-conceptions about the animation space.

This conversation also invited Vogel to break down how he works with writers, artists, directors and big IP brands, how he got involved with DHX and Strawberry Shortcake, the challenges of re-inventing a brand for today’s kids, where animation is going with digital streaming – and the incredible opportunity it offers new creators.

In the afternoon, Vogel presented a few select clips to illustrate how animated kids shows can appeal to an older generation, how mature undertones are able to bridge issues that are relevant to today’s audiences, why the mythology of a show can be reminiscent of other IPs with large fan followings, what it’s like to work on a globally recognized brand, how animated shows for girls are traditionally not given the same weight and sophistication as boys animation, how we’re reaching a space where big budgets and technology allow kids animated shows to match feature film animations, and what that means for writers, animators and other creators.

On June 18 & 19, 2019 the CFC invited 7 creators to participate in an intimate two-day animated original concept bootcamp with Michel Vogel and DHX Media's Director of Development - Animation, Todd Brian. These creators were given the opportunity to experience an intensive concept/pitch development workshop where Michael and Todd guided the creators and their original ideas through a fun and informative process, working them through various filters in a roundtable setting as they explored the viability of each concept in the kids animation space.

A.J. Demers "Bucky Adare Gets Lost in the Multiverse"

Natalie Urquhart "Who Can Stay Quiet the Longest"

Michael Vogel is a writer/producer and super geek who has been fortunate enough to work on some of the biggest brands in the entertainment industry. He has a proven track record in developing IP across features, television (prime time and cable) live action, animation and digital.

His experience as a development executive at Sony Pictures Television and Hasbro Studios has given him a strong background in brand building and creating stories, characters and experiences that can live on multiple platforms. He has worked with some of the leaders in branded entertainment (including Marvel, Cartoon Network, Disney, Hasbro and Sony). He helped launch Hasbro Studios, the entertainment division of Hasbro where he was tasked with bringing new life into brands such as My Little Pony, Transformers and GI-Joe.

After spending several years as an executive, a fateful trip to Burning Man helped remind him why he moved to Los Angeles in the first place and he decided to make the leap to the creative side of the business, co-writing and co-producing the animated movie version of My Little Pony for Hasbro Studios and Lionsgate. He has written on several shows including Avengers Assemble, Stretch Armstrong, Micronauts, Young Justice and of course My Little Pony: Friendship is Magic. He has continued to be a part of the MLP creative team throughout its final season, including writing the My Little Pony: Best Gift Ever holiday special as well as several MLP themed books and embracing the magic of friendship in his daily life. He is currently working with DHX Media, one of the world’s foremost producers of children’s entertainment, on several top-secret things that he can’t wait to talk about. 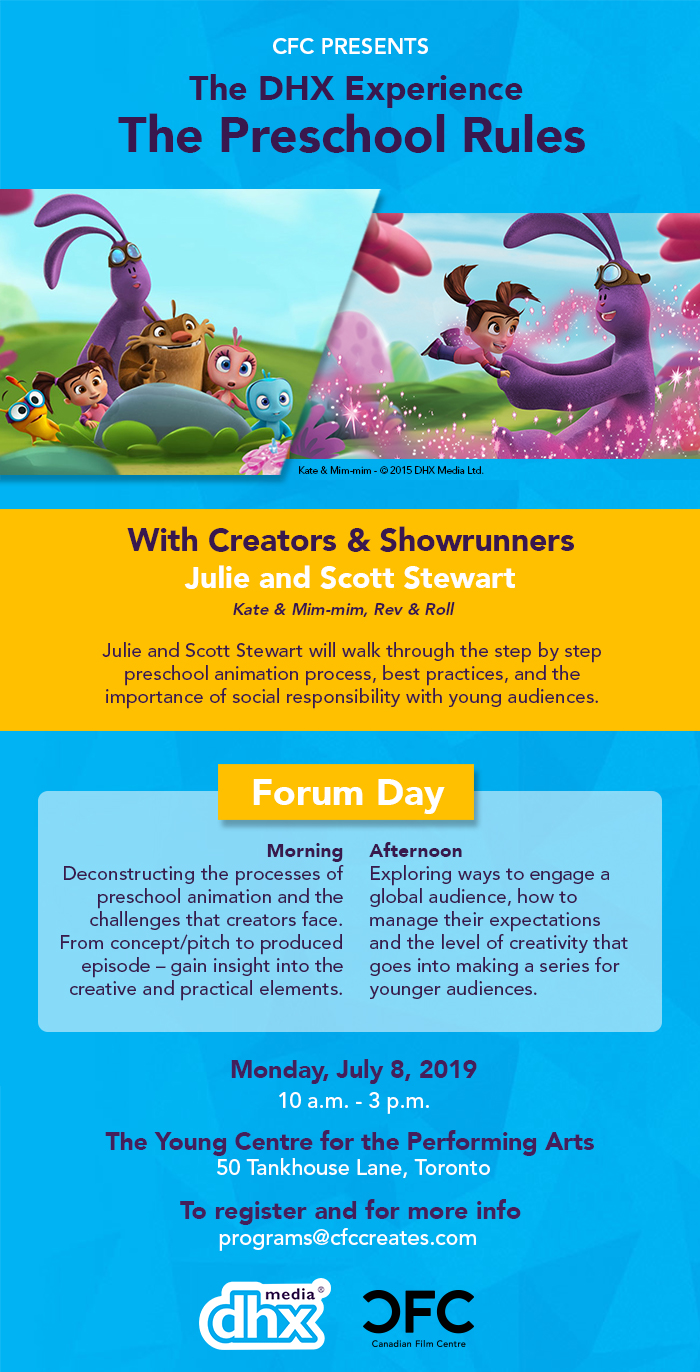 Using clips from their series Rev & Roll, Julie and Scott deconstructed select episodes from concept/pitch to production, taking the audience through the step by step process of scheduling, storyboarding, animatics, sound, and much more. Julie and Scott also shared insight into the creative and practical elements needed to develop kids’ content, which included guiding the audience through the pitch writing process and best practices, and talking about what some of the challenges and misconceptions writers/creators have about creating new preschool concepts.

In the afternoon Julie and Scott discussed the importance of engaging audiences: how much thought and creativity goes into making a series for younger audiences; how to use market extensions to create meaningful engagement with audiences; and how an entertainment-educational series can be an effective tool in bringing about positive change and life lessons, as well as promoting positive behaviour.

They also examined how a series can be socially accessible on a global scale, how to manage audience expectations, and the creators’ abilities and desire to help influence a new generation.

Scott and Julie Stewart are award-winning content creators and entrepreneurs based in Vancouver, Canada. Scott graduated with high honors for Creative Writing from the University of Pennsylvania, and Julie from the Honors Program at Rutgers College at Rutgers University, with a degree in biology and Spanish. After graduation, Julie taught elementary school while Scott worked as a visual effects artist at top post-production facilities in New York City, producing effects for TV commercials, including Super Bowl spots. In 2001, they created the animation studio, Speakeasy FX, where Scott produced award-winning advertising spots for clients such as Pepsi, American Express, FedEx, ESPN and GE.

Jumping into kids’ animation in 2008 to 2010, they produced two seasons of Sesame Workshop’s series, Abby’s Flying Fairy School, which won two Emmys and two Kidscreen Awards, one for Best Animated Series and the other for Best Preschool Program in 2012.

In 2012 they became full-time content creators and showrunners, starting with the girl-empowering series Kate & Mim-Mim for Fremantle Kids & Media and DisneyJr. Two seasons later, Kate & Mim-Mim is a global hit, airing in 130 countries worldwide, with consistently excellent ratings. It has its own toy line, series of DVDs and books. Kate & Mim-Mim was nominated for two prestigious Leo awards in 2016, and won the Shaw Rocket Award in 2016.

In addition to creating and showrunning their own content, Scott and Julie also seek out quality properties that are in need of being creatively reenvisioned or adapted from another medium. They helm all creative aspects of the project: from world creation/re-envisioning to art direction to story development to animation style and music. Scott and Julie recently reenvisioned a beloved and well-known book propertywith a major European broadcaster, a major distributor and a major toy partner, which is scheduled to go into production later this year.