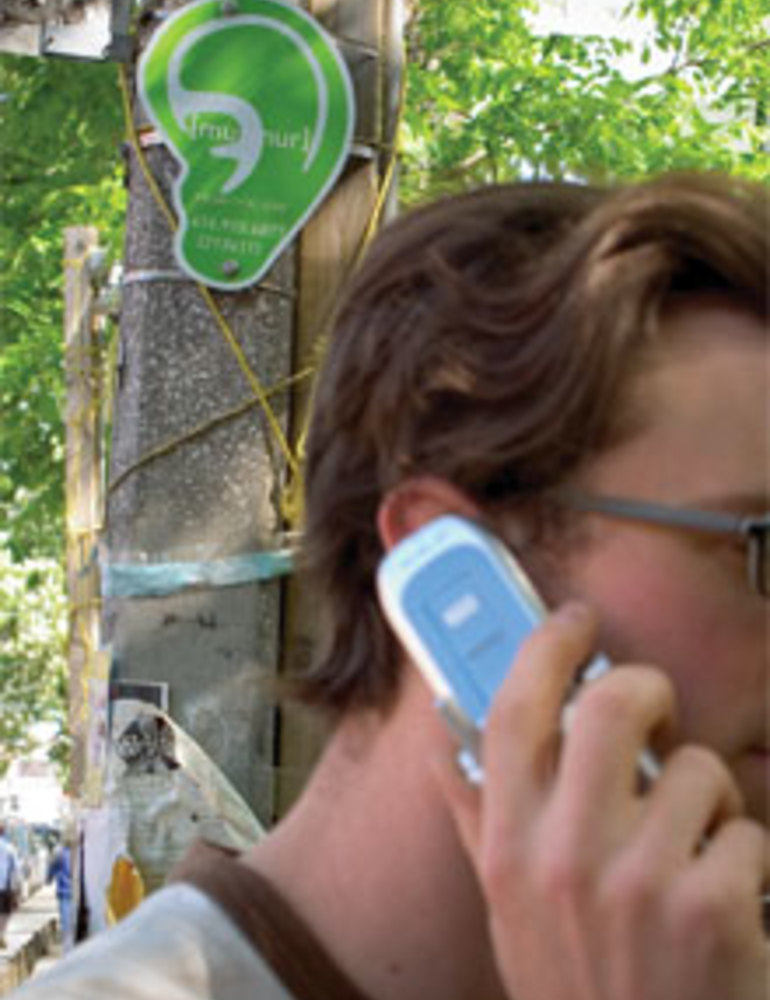 [murmur] is a documentary oral history project that records stories and memories told about specific geographic locations. We collect and make accessible people's personal histories and anecdotes about the places in their neighborhoods that are important to them. In each of these locations we install a [murmur] sign with a telephone number on it that anyone can call with a mobile phone to listen to that story while standing in that exact spot, and engaging in the physical experience of being right where the story takes place. Some stories suggest that the listener walk around, following a certain path through a place, while others allow a person to wander with both their feet and their gaze.

The stories we record range from personal recollections to more "historic" stories, or sometimes both — but always are told from a personal point of view, as if the storyteller is just out for a stroll and was casually talking about their neighbourhood to a friend.

It's history from the ground up, told by the voices that are often overlooked when the stories of cities are told. We know about the skyscrapers, sports stadiums and landmarks, but [murmur] looks for the intimate, neighbourhood-level voices that tell the day-to-day stories that make up a city. The smallest, greyest or most nondescript building can be transformed by the stories that live in it. Once heard, these stories can change the way people think about that place and the city at large.

All our stories are available on the [murmur] website, but their details truly come alive as the listener walks through, around, and into the narrative. By engaging with [murmur], people develop a new intimacy with places, and "history" acquires a multitude of new voices. The physical experience of hearing a story in its actual setting — of hearing the walls talk — brings uncommon knowledge to common space, and brings people closer to the real histories that make up their world.

The stories are as personal as the relationship people have with the spaces they inhabit. Secret histories are unearthed, private truths unveiled and tales as diverse as the city itself are discovered and shared. All members of a community are encouraged to participate and contribute, so that the "voice" of [murmur] reflects the diverse voices of the neighbourhood. These are the stories that make up the city's identity, but they're kept inside of the heads of the people who live here. [murmur] brings that important archive out onto the streets, for all to hear and experience, and is always looking for new stories to add to its existing locations.

[murmur] was first established in Toronto's Kensington Market in 2003. That same year projects were launched in Vancouver's Chinatown and along St. Laurent Boulevard in Montreal, and over the past few years [murmur] has grown and expanded across other neighbourhoods in Toronto, Calgary, and San Jose, California. [murmur] Edinburgh launched in Leith in January 2007, and [murmur] Dublin Docklands launched in May 2007. [murmur] Australia launched in Geelong in February 2009.

[murmur] was initially developed with the assistance of the CFC Media Lab, Toronto.

Was showcased at ISEA 2006 and continues to roll out in markets across the world including: Toronto, Montreal, Vancouver, Edinburugh and San Jose.