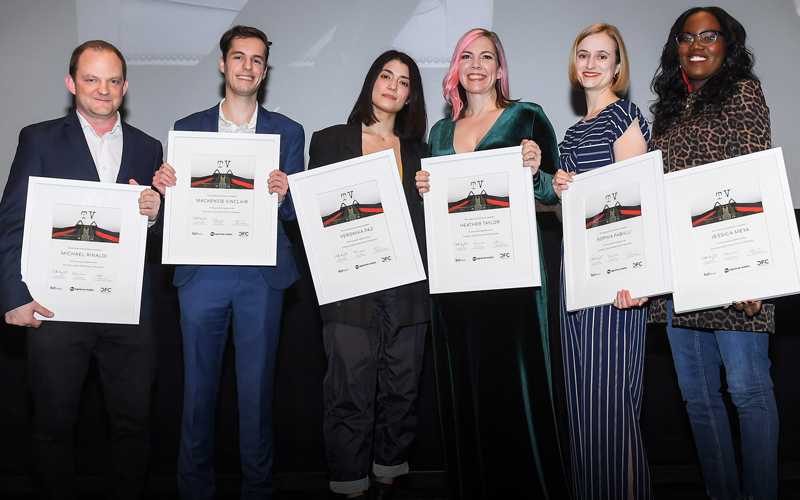 There’s no doubt that the CFC Prime Time TV Program is the finest in the country. I think it’s the finest on the continent – the wellspring that nourishes our entire industry.
Tom Hastings, Director of Drama, Original Programming, Bell Media

Working in series television is not for the faint of heart – nor for those without a healthy sense of humour, as the CFC’s chief programs officer Kathryn Emslie reminded us at last night’s event. Writing for television demands more than a clear-eyed attention to craft. It also means understanding the daily demands of creativity and production.

"They are all wonderful writers. They have amazing, unique skills that will broaden and deepen as they grow artistically. What matters as much as craft in the television industry is who they are as people. When a project begins, you spend a ton of time with the same people, and you want those to be good people. And these kickass people are good people."

This year’s talented group – Sophia Fabiilli, Jessica Meya, Veronika Paz, Michael Rinaldi, MacKenzie Sinclair and Heather Taylor – arrived last fall to work with award-winning writer/producer Alexandra Zarowny. Most recently, she has been executive producer of Private Eyes, and before that, as a writer for Lost Girl and Wynonna Earp (where she also went on to become an executive producer).

"This program generates significant interest and support both here and abroad, because not only are the executive producers we attract top level and the writers leave ready to work in a story room, but the experience also delivers some exciting new projects ready for the marketplace."

Zarowny herself testifies to the program’s success. As one of its alumni, she came full circle by returning as this year’s executive producer in residence, leading a new generation of writers in developing her original series, Bedlam. Previous showrunners in this program have developed such popular hits as Orphan Black and Travelers.

Zarowny described her series Bedlam as a “one-hour medical genre series about an extraordinary team of doctors, including an exorcist, a clairvoyant, a shapeshifter, a witch and a telepath, who slay the monsters who find points of entry into people with unresolved mental illnesses and medical mysteries.” It is also, she added, “close to my heart because it’s very difficult to talk about mental illness and medical mysteries” – something that might have been a challenge to lesser writers, but not these six residents. As Zarowny described them with zest, “these ballers just jumped right in!” 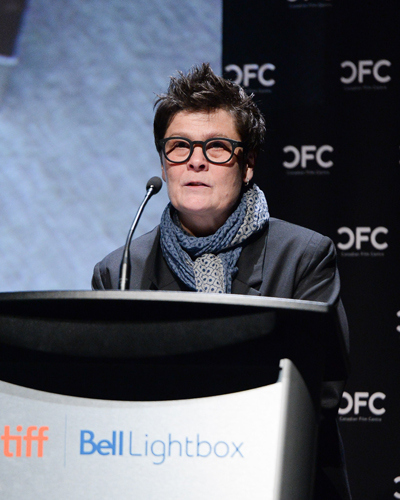 Kathryn Emslie (left) kicked off the night by unveiling a teaser that gave the audience a taste of what went on in the program . Emslie then thanked the many amazing mentors in addition to Zarowny who guided these six writers on their individual creative journeys, including Al Magee, Amy Cameron, Jane Maggs, Susan Coyne, Michael MacLennan, Ley Lukins, Pat Smith and Sean Reycraft.

Emslie also shared inspiring news from the family of 2010 TV Program alumnus Jordan Christianson. Jordan passed away in 2017, and in the spirit of his generosity, his family has established the Jordan Christianson Bursary Fund at the CFC, to support writers from British Columbia or Alberta invited into the Prime Time TV Program. Emslie offered our collective and heartfelt thanks to the family, Gail, Brian, Karina and Dane. She then reflected that “those who knew Jordan miss him incredibly, his positive energy and his wonderful sense of humour. We believe he would love nothing better than to be supporting other worthy and talented writers as they make their way in this industry like he did.” Read more about the new bursary here. 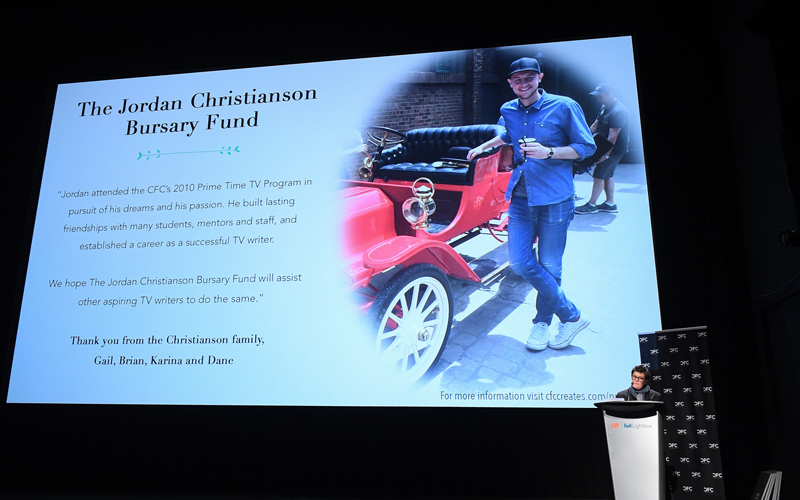 Next, Slawko Klymkiw, CEO, CFC, acknowledged that regardless of how business changes, who commissions work, or who broadcasts programs, “writers are the heart and soul of the business.” He also offered our appreciation for the Program’s longtime government, private sector, and broadcast supporters, including the Government of Ontario, Bell Media and ABC Signature Studios. Klymkiw noted that the Government of Ontario have supported the CFC for more than 10 years, registering how much the program contributes to business and job creation in and beyond Ontario. He added that ABC Signature Studios as one of our partners “has been terrific and seen the huge value in writers, especially Canadian ones.” 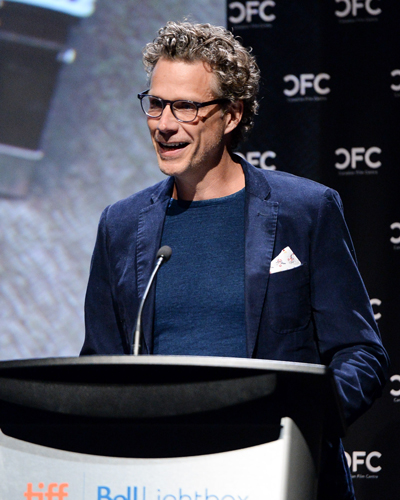 Klymkiw then invited Bell Media’s Tom Hastings (left), Director of Drama, Original Programming, onstage. Hastings added that for him and the creative team at Bell Media, these writer-alumni have “enlivened and enriched our industry” over the years and he was happy to “welcome six more to this illustrious group.”

A winsome, witty and generous Alexandra Zarowny took to the stage next to introduce her own series and each of the six writers in more detail. Before each writer came onstage to accept their certificate, Zarowny brought them to life as vivid characters in their own right, people who taught her as much as she did them – especially about the powers of striving and observing; of being more yourself, more courageous, and more open to the unexpected; and that sometimes “the best response to adversity is to be the brightest spark in the room.” 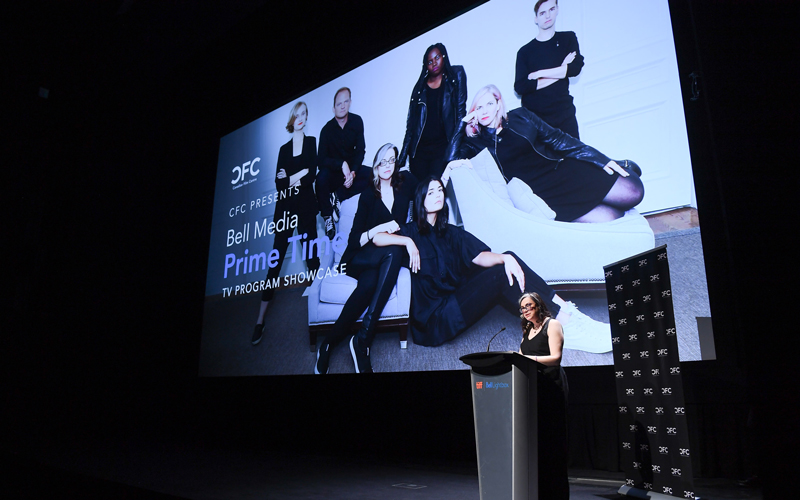 These writers didn’t simply create people who pop and come to life on the page. Their characters shine even brighter onscreen. The highlight of the evening was, of course, the screening of these six brand new voices in their “teasers” – short promos that each writer creates to showcase and distill the key elements of their own original series, as described by Erin Burke, CFC’s Associate Director, Programs & Content. The creation of these pieces is also an exercise in showrunning, with each writer experiencing the whole script-to-screen process, to guide the creative decision-making throughout production and post.

Take a look for yourself here:

A special thanks to all of this year’s mentors and guests in the Bell Media Prime Time TV Program!

Attention TV writers! If you're interested in applying, head here for more information - applications are now open, and deadline is May 3, 2019.

All photos by Sam Santos/George Pimentel Photography. Enjoy more photos from the evening.