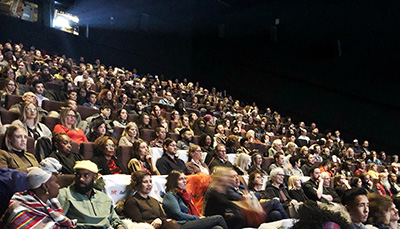 On Tuesday, December 11, a sold-out crowd gathered at TIFF Bell Lightbox to celebrate the achievements of the 19 talented filmmakers completing our 2018 Cineplex Film Program.

The 2018 Cineplex Film Program Showcase offers these filmmakers – five writers, five directors, five producers, and four editors – an opportunity to screen their work in front of an industry audience, and to celebrate the five months of intensive work on their craft and storytelling.

Kathryn Emslie, CFC’s Chief Programs Officer (pictured below), noted in her opening remarks that every year’s Showcase is unique. They are programmed to spotlight the distinctive talent of each year’s residents. This year, writers showcased short teasers for the feature project they developed while in the program, while directors screened narrative short films with their voice and vision as creators on display. Each short was produced by a producer in the Program; the producers also generated atmospheric reels on what guides and inspires them. The editors' talent and skill shines through across the evening in the 15 pieces screened.

"Over the last 30 years, the Cineplex Film Program has evolved and changed alongside the changes in our industry, to ensure we remain relevant, responsible and impactful. What has remained a constant has been the Program’s focus on dramatic onscreen storytelling, and on meeting the needs of our storytellers, regardless of the medium or format. The same is true for our showcases."

Showcases offer every resident the opportunity to introduce their narrative and stylistic approaches (including playful segments on editors’ must-haves in the suite). Samples of the work then live on each of the resident’s CFC profile page. The work produced in the program then acts as a type of “calling card” for each filmmaker, evidencing their cinematic skills and their creative vision. Productions shot within the program also feature music exclusively created by our Slaight Music Residency, and often feature actors from the CBC Actors Conservatory. 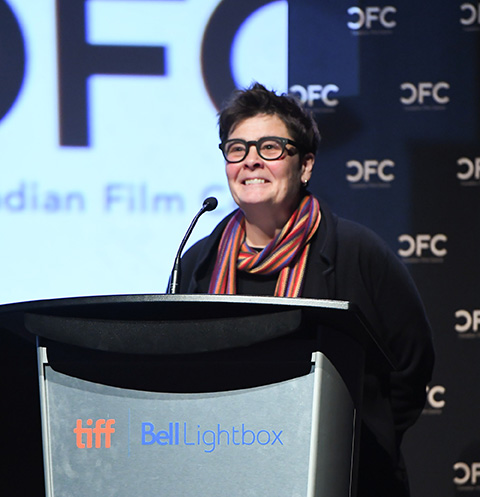 Smart industry professionals and executives know not to miss these events, which offer a sneak peek at the next generation of talent coming up. Showcases draw numerous other program alumni, mentors and industry guests, as well as the residents’ cast, crew and family members, who all join in the experience.

In 2018, the Cineplex Film Program – the CFC’s signature program – is celebrating its thirtieth year. As CFC CEO Slawko Klymkiw noted, the Program has contributed significantly to the CFC and the wider Canadian talent pool since its start, and has been a strong economic driver of Ontario’s, Canada’s and the world’s screen-based entertainment industries.

Klymkiw was especially pleased to announce that Cineplex renewed their funding of this cornerstone Program. As a result, future generations of this talent will continue to benefit from the outstanding mentorship, business acumen, networking and close, bespoke attention to craft and collaboration that are the Program’s hallmarks.

Program alumni, as Erica Proudlock, CFC’s Executive in Charge of Programs and Talent, described, are among Canada’s most successful – “original voices and innovative storytellers” that lead us to a “matrix of captivating stories.”

For example, at this year’s Directors Guild of Canada (DGC) Awards, three of the five nominees for Outstanding Directorial Achievement in Feature Film were from this Program: Molly McGlynn from the Writers’ Lab (Mary Goes Round); Miranda de Pencier from the Producers’ Lab (The Grizzlies); and Directors’ Lab alumnus Keith Behrman for Giant Little Ones, which was also selected as one of Canada’s Top Ten by the Toronto International Film Festival.

Proudlock also shared the great news that the Programs’ editors have been active behind the screen and in the industry, including four appointments, all women, to the Canadian Cinema Editors Association. 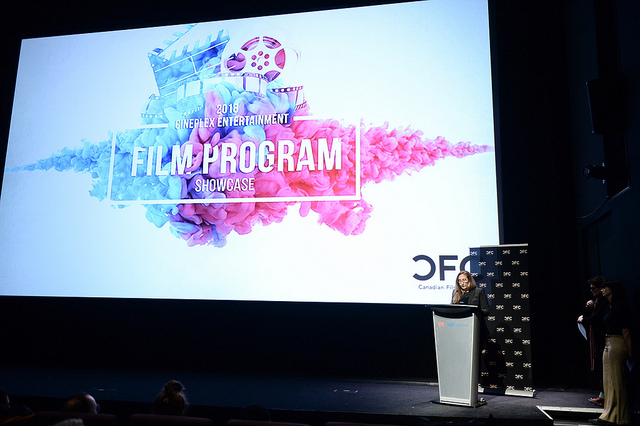 Erin Burke, CFC’s Associate Director, Programs & Content, emphasized the power of storytelling and noted “the talent we are celebrating tonight have power – through their work.” She shared that the Program does more than support talent. It also shepherds 15 feature film projects into development every year during the Program’s five months, overseeing more than 300 hours of production and hundreds more in post. Last year alone, five features developed in the Program have gone to camera, with three more poised to greenlight – a “pretty great track record of getting work produced and seen,” which Burke stressed is “a big part of why we do what we do."

One recent example of project success and alumni collaboration is the much-buzzed-about upcoming feature, Tammy’s Always Dying, featured in The Hollywood Reporter. It began as a feature script developed during writer Joanne Sarazen’s time in last year’s Writers’ Lab. Here, she met Amy Jo Johnson, a resident in the Directors’ Lab, who expressed a strong desire to direct the feature from Sarazen’s script. Johnson then connected Sarazen with producer Jessica Adams, alumna of the 2014 Producers’ Lab. One short year later, they not only had two stars cast (Felicity Huffman and Anastasia Phillips), but they also just wrapped shooting. Read our longer profile of Sarazen and the film.

A hearty round of applause to all of the filmmakers who gifted us with their stories and insights last night. We can’t wait to see what’s next! As Emslie said, our founder, Norman Jewison, created both the CFC and this Program 30 years ago: “It’s been an amazing adventure, one that is far from over,” and in fact, she added, “We’re just getting started." 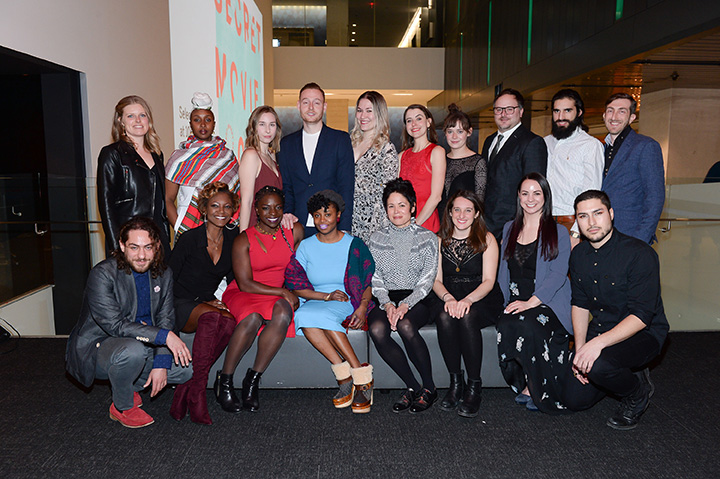 If you couldn't snag a seat at Tuesday's Showcase, take a look at the pieces here:

Enjoy a selection of the evening's photos on Flickr.

Applications for the 2019 Cineplex Film Program will open soon, so if you’re a film director, editor, producer and/or writer, we invite you to learn more about the program. If it’s what you’re seeking for the next stage of your career, follow us on Twitter, Facebook or Instagram to see when applications open – and then apply!

All photos (except top) by Sam Santos/George Pimentel Photography.