From Stage to Screen to Success: Screenwriter Joanne Sarazen and 'Tammy’s Always Dying'


If you as a writer do not feel like you are good enough, write authentically and submit to everything. Because inevitably someone will see you. Even if they don’t, then at least you’ll have done something that you love every day.
Joanne Sarazen 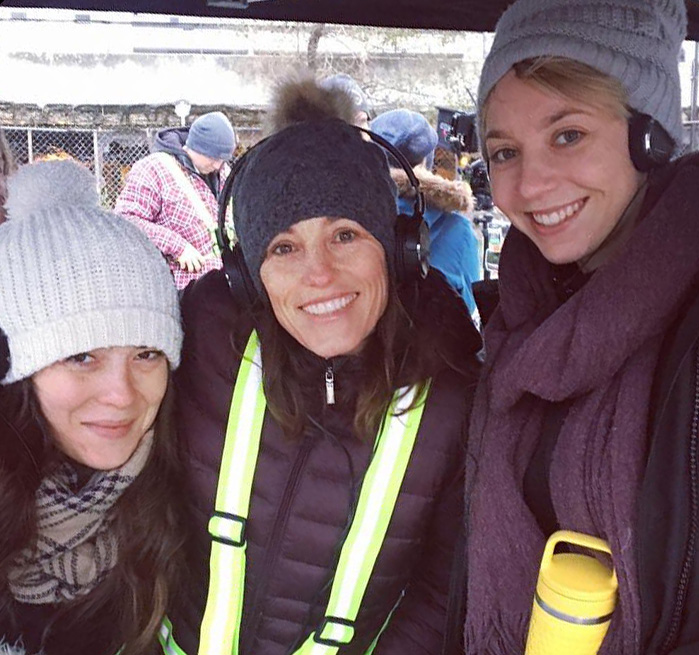 In July 2017, playwright-turned-screenwriter Joanne Sarazen joined 17 other talented writers, directors, editors and producers at the CFC’s Cineplex Film Program. They collaborated for five and a half months, along with residents from the CBC Actors Conservatory and Slaight Music Residency. Together, they honed their skills to develop their own original projects,

With this dream team and such impressive momentum, Tammy’s Always Dying promises to be a compelling new feature that’s already generating buzz. We spoke with Sarazen on her transition to screenwriting, the development of Tammy’s Always Dying, and why it’s important for writers to keep going despite rejection.

From Playwright to Screenwriter at the CFC

The CFC was very good for me, for how I think and work. You move from one thing to another to another, so you’re never bored and always focused. You learn to accommodate people and stand up for your ideas. I came into the CFC a playwright and left as a screenwriter, and I am so incredibly grateful for that.
Joanne Sarazen 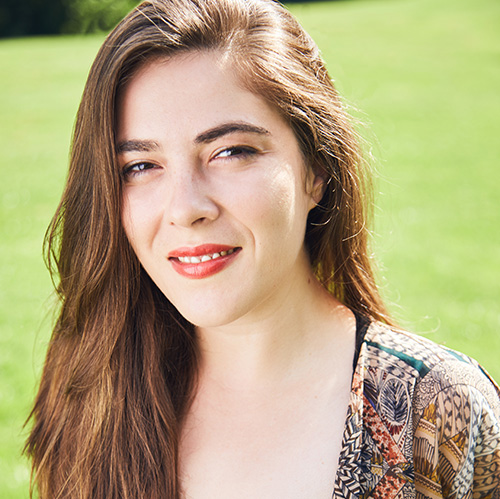 Joanne Sarazen’s transition from playwright into screenwriter highlights how much the Cineplex Film Program embraces and champions original voices through in-depth, individualized craft and collaborative work.

Before the CFC, she defined herself primarily as a playwright. She’d made two short films and six plays, produced in Montreal, Toronto and Banff, for which she received the Mainline Next Stage Award and nominations for her work in Montreal Fringe Festivals.

In addition to acting and directing for film and theatre, Sarazen also waitressed for 15 years to support herself. Being on the set of Tammy’s Always Dying, she said, was like waitressing, demanding a “strong work ethic” and “an ability to get things done while everybody’s talking to you at the same time."

One year before she applied to the CFC, Sarazen began developing character sketches for Tammy in a writing group with Writers’ Lab alumna Clara Altimas. Altimas recommended Sarazen apply.

“Clara and I talked one night and she said, ‘You should write a feature, because I think this program would be good for you.’ So I took all the pages of stuff I’d been working on and formulated it into a feature. That took a while to write, but I allocated my time between waitressing gigs and came up with a beginning, middle and an end. Because I had written so much about the characters, I knew them well. It became more of a storytelling exercise than a character exercise."

Sarazen applied and was accepted, which then became instrumental to refining her feature. “Because I’m a playwright, some of my first scenes were eight pages long and two people sitting in a room talking. Not terribly dramatic. But when I got into the CFC, by virtue of doing a lot of workshops and being friends with artists, I really liked the table read discussions. I enjoyed defending my ideas and receiving feedback. In particular, program mentor Maureen Dorey gave me specific notes and helped me develop as a visual artist, not just someone good with character and dialogue. She’d always ask me, ‘What does this place look like?’ or ‘How are things being communicated by the landscape in which your characters live?’ That helped me develop and not overwrite."

On Being in the Writers’ Lab

I always felt like I had a community at the CFC. I was searching for that ever since I’d moved to Toronto seven years prior. A community.
Joanne Sarazen

Strong stories with complex characters like Tammy’s Always Dying flourish when a writer meets the right people to take creative risks – exactly what Sarazen sought and received from the Program. The Program, she said, ”wanted to forge relationships to lead us in times of crisis, which was great, but it also made our work better. It made us all better artists."

It also fostered close personal and professional links between Sarazen and her fellow writer-residents, Anna Fahr, Luke Toye and Marni Van Dyk, ties that felt like family. “We got together outside of the program and supported each other immensely. We were kind to and fought for one another. All three of them taught me to value my artistic integrity and supported me throughout this process."

She admitted she was intimidated on day one. “I was looking around at these people who spoke a language I had never learned. I didn’t want anyone to read my work. Yet as soon as our scripts were released and we had our first meeting as writers, there was no competitive nature. It became clear that everyone was there to support one another."

Her fellow residents shared their knowledge as much as the mentors and guests did. Sarazen described one experience with Producers’ Lab resident Natalie Urquart. “I was trying to put together a pitch package when Natalie walked by. She sat with me, even though she had so much to do herself, and showed me how to use various free programs to put together something that could look good. I never felt there was a moment where I was alone."

“Are we really doing this?” Tammy’s Always Dying from Script to Set

The Program enabled Sarazen to polish her screenplay of Tammy. It’s the story of 35 year-old Catherine, who keeps talking her self-destructive mother, Tammy, out of committing suicide every month when the welfare cheque runs out.

This routine allows Tammy to hold on to her daughter, but it leaves Catherine feeling like it’s her one skill in life. When Tammy is diagnosed with terminal cancer, however, the possibility of life without her mother becomes very real – and so does Catherine’s desire to flee. Will she stay and trust the woman who’s always let her down, or find the courage to live her own life?

Take a peek at the teaser Sarazen screened of Tammy’s Always Dying in December 2017:

After the first table read in Fall 2017, Sarazen’s fellow Directors’ Lab resident, Amy Jo Johnson, came over. Sarazen recalls that Johnson understood “the root theme of the film right away. She left me alone for a while, but then kept hinting that maybe we could work together. Then she asked if she could pass the script to her producer, Jessica [Adams]."

Sarazen said yes. She valued how much Johnson “connected to the story, and how as time went on, she seemed to be the perfect person to make the film.” As Sarazen notes, Johnson “never would have heard it, if it hadn’t been for the table read at the CFC."

So shortly after the Program ended, Sarazen, Johnson and Adams sat down, looked at each other and said, “Are we really going to do this?” They already knew the answer was an unequivocal yes.

The rest, as they say, is history. They powered on set in Hamilton, Ontario, being three “Type-As,” as Sarazen half-joked. The film was produced with the participation of Telefilm Canada, Tajj Film Distribution, NABET 700-M UNIFOR and Eggplant Picture & Sound. Commissioned by Bell Media’s Crave and CBC Films, it was developed with the assistance of The Harold Greenberg Fund and the CFC.

Have a Profound Love of Writing

In mid-November, the team started shooting Tammy. They were done by December 5. The experience created a strong, kind team. ”We get along really well,” Sarazen said. “We’re incredibly professional, but then we can turn it off and make jokes. We have a great connection and are having a blast.” She added, “Every day on set I am incredibly grateful that a story I wrote has inspired so much commitment from such a variety of people."

Her humility here and throughout our interview underscores her obvious talent, which resulted in a highly unusual accelerated path from stack of notes to rough draft to on-set wrap – and all in two years.

This success also speaks to Sarazen’s focus, craft and persistence as an artist. When asked what piece of advice she’d give other writers, she said, “Have a profound love of writing. It’s one of the few art forms you can do alone. That requires so much patience and self-motivation. You must truly, truly love it. Because you could have your screenplay made in a year or get rejected five years in a row – which I did, too. Find the joy and the love of it. Because if you have that, then whether the success comes or it doesn’t, at least you’ll spend a short period of time every day doing something you love." 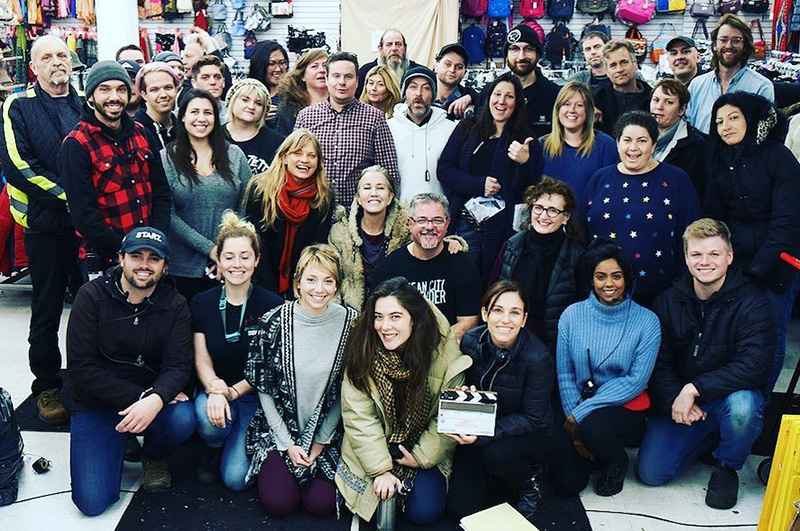 Congratulations to Sarazen, Johnson and Adams on this well-deserved success. Keep an eye out for Tammy’s Always Dying, which, given its pace so far, will likely be coming to screens near you soon!

If you’re an aspiring director, editor, producer or writer, applications for the Cineplex Film Program will open soon - learn more about the program here.