On a rainy Monday, November 26, a diverse group of startups and venture capitalists gathered at the CFC Media Lab’s IDEABOOST Road Show at Corus Entertainment in downtown Toronto. Part funding session and part networking session, the Road Show gave 10 startups a chance to deliver a seven-minute pitch to a room full of motivated investors, a prime example of how the IDEABOOST-Network Connect community benefits both participants and the tech industry writ large.

Unlike other pitch events, startups at the Road Show have either participated in one of the seven cohorts of CFC Media Lab’s IDEABOOST Accelerator (The Discourse, MasterpieceVR, Paddle HR, Synervoz), or are part of Network Connect, the IDEABOOST program’s startup affiliates group (ARFront Technologies, Battleverse, Dark Slope, MusicPeaks, Penta Medical and Torus Media Labs). Taken together, they represent an array of disparate industries, ranging from laser therapy to horse racing to video games. Investors like  Corus Entertainment, one of the original sponsors of the wider IDEABOOST-Network Connect program and the host of Monday’s event, values that variety.

“You never know where the next great idea is going to come from,” says Colin Bohm, Executive Vice President of International Development and Corporate Strategy for Corus Entertainment. “What may not seem relevant to our business today may be extremely relevant in a couple of years.” 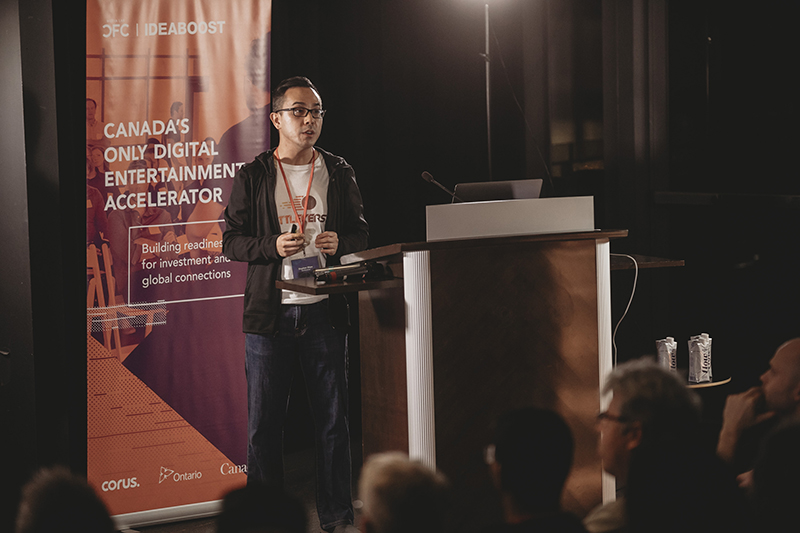 For all 10 startups, the Road Show gave them an opportunity to secure funding that they need to move on to the next stage of development. They know the people in the room are listening, which is not necessarily the case in other pitch scenarios.

“This feels very real,” says  Battleverse co-founder Stephen Shew, who compared the Road Show to a prior appearance he made on Dragon’s Den with a different company. “Dragon’s Den is a TV show, so they’re looking for entertainment value. This feels like there are real stakes, because people are legitimately looking to invest their money.”

Of course, a startup like Battleverse – which is developing an augmented reality (AR) gaming platform for use in family entertainment centres – still needs to convince a potential partner to take that plunge. So the Road Show is more casual and welcoming than a typical pitch environment, with demos and a networking reception following the presentations.

“The bigger the crowd, the more nervous your brain,” says Karan Bhachech, Senior Manager of ARFront, which is developing a software platform that makes it easier for employees to telecommute from job sites. The Road Show “is a good learning and confidence boosting experience.”

That makes the Road Show invaluable to entrepreneurs, even if it doesn’t lead to immediate funding. It fosters intellectual exchange, too. The founder of a small startup will approach problems from a different vantage point than those working in larger organizations. For a company like Corus, that stance is key to the appeal.

“It’s human capital” says Bohm, explaining how Corus’s involvement with IDEABOOST-Network Connect has allowed it to stay ahead of the latest trends in tech, media and digital entertainment. “We’re trying to recruit not just good ideas, but good people. You get exposed to entrepreneurs and people who have a different perspective.”

Those benefits are just as relevant to startups, who are able to learn more about the industries they’re trying to disrupt and refine their products accordingly.

“I think we all believed that [AR and VR] would take off faster than it has,” says Bohm. “Companies that are pitching now are evolving their business model to respond to the market.” That’s particularly true for the startups in IDEABOOST-Network Connect, who often need to learn to be tenacious. “Just because you hear ‘no’ the first time, doesn’t mean it’s ‘no’ forever,” he adds. “As your business changes, make sure you keep in touch with those people that initially said ‘no,’ because you never know when that turns into a ‘yes.’”

“The program helped hone our message, our pitch deck, and connect to people with real advice,” says Shew. “The greatest thing is talking to investment advisors who tell you exactly what people are looking for. They tell you what you need to have.”

“When we first started pitching, the idea was clear in our minds, but we had no way of effectively communicating what we were thinking in a way they understood,” says Jonathan Gagne, CEO of MasterpieceVR. “Being a part of the IDEABOOST Accelerator helped us communicate very complex ideas in very simple ways.” 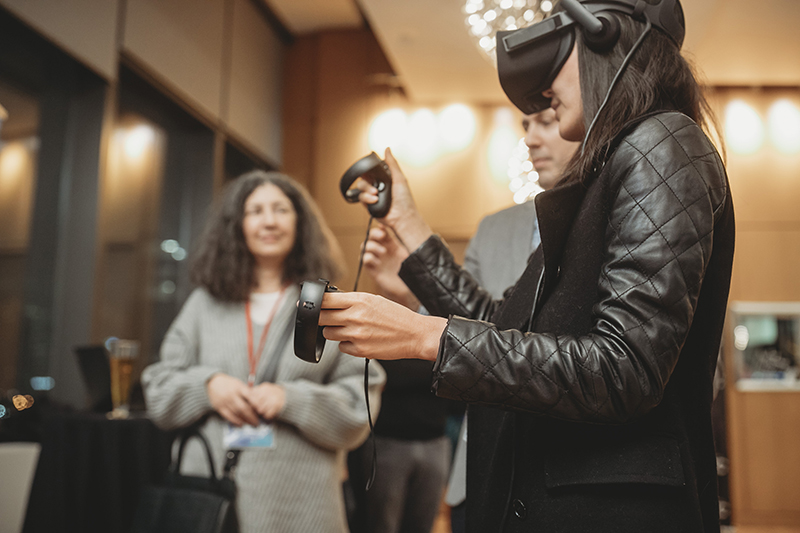 Masterpiece VR is a software suite that allows people to sculpt and paint in virtual reality (VR). The company is hoping to license it as a tool to animators and game developers. In his Road Show pitch, Gagne demonstrated how Masterpiece VR allows 3D modelers to work faster (and with less software training) than current options like Z-Brush, which showcased the evolution of Masterpiece VR as a platform and a company.

“He benchmarked his product against existing products,” says Alexa Roeper, CEO of Penta Medical, which produces a portable laser therapy device. “It made it easy to understand as someone who doesn’t know anything about the space.”

That is ultimately what makes this event so unique. Its 10 startups come from many different fields and so are not competitors in the traditional sense. Instead, everyone is working together to solve the problems of the future – which opens the door for collaboration, one of the IDEABOOST program’s unique value propositions that sets it apart from many startup communities and accelerators.

“I speak to a lot of companies that are one stage before where we’re at,” says Gagne. “Having spent a lot of time there myself, I’m able to transfer that insight from the mentors before me to the next generation that are working to get their idea off the ground.”

“It’s always useful to see other people present,” adds Gagne. “We can replace our weaknesses with their strengths. Observing others and seeing what works helps us continue to improve.”

The result is a more supportive and nurturing atmosphere that helps young Canadian entrepreneurs thrive in an increasingly competitive global marketplace.

“IDEABOOST helped us connect with entrepreneurs in Toronto and Canada. It has given us a lot of opportunities by which we can groom our own business,” says ARFront’s Bhachech.

“In Canada, you can talk to [investors] more frequently for advice or engage with them more,” concludes Roeper, contrasting IDEABOOST-Network Connect with the faster, more aggressive pace of Silicon Valley. “It’s good to have Canadian investors and have people understand where you’re from.”

Sometimes that conversation leads directly to a round of funding. Sometimes it establishes the groundwork for a future partnership. Either way, the IDEABOOST Road Show offers both access and expertise, generating opportunities for Canadian startups, and then helping them develop the skills they need to capitalize on those opportunities. That brings the best ideas to the fore and paves the way for further innovation. 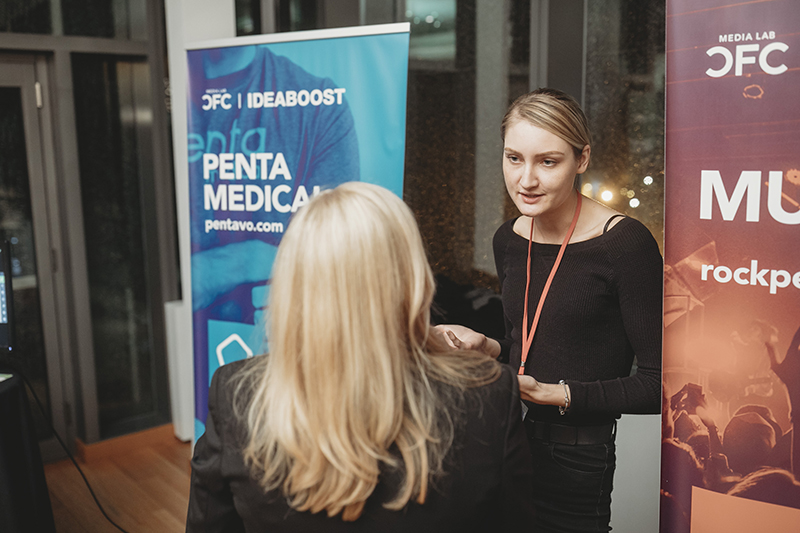 "The quality of mentorship and the network that I came away with are both extremely valuable to the business. (IDEABOOST) really honed my thinking, challenged me on multiple levels, and accelerated our progress."