Putting Women in the Director’s Chair: A Profile of CFC Features and Women in View’s Historic Partnership


In August 2018, CFC Features announced the results of their historic partnership with Women in View (WIV), the national not-for-profit dedicated to strengthening gender and cultural diversity in Canadian media.

CFC Features adapted WIV’s Five in Focus nomination process to select its next project. They gathered nominations from culturally and regionally diverse female creators across Canada, aiming to redress how underrepresented female filmmakers are in Canadian cinema, women of colour especially, and to better promote the work of Canadian female directors.

The new approach was so successful that CFC Features chose two projects for support: BEANS, from co-writer/director Tracey Deer, which explores a twelve year-old Mohawk girl’s experience of the Oka Crisis in 1990; and SUMMER WITH HOPE, from writer/director Sadaf Foroughi, which traces an alliance between two adolescent swimmers in their small Iranian town.

Both the process and partnership counter the stereotype of too few female directors in Canada today. A multitude of compelling projects were brought to the CFC’s attention over the past year. That indicates just how much talent is out there – and why initiatives like this one are necessary.

In 2017, Justine Whyte, CFC Features’ director and executive producer, was speaking with Sherren Lee, a director-alumna of the Cineplex Entertainment Film Program (also currently one of The Hollywood Reporter’s “Canada’s Rising Stars”). Lee was one of the first Five in Focus participants, and found its mentorship valuable. Among other wins, it helped her break into directing television, which she has continued to do ever since.

Whyte also learned about WIV’s then-executive director/co-founder Rina Fraticelli, who shared Whyte’s approach to mentorship.“There are different types of mentorship,” Whyte noted. “Talking is one, but she wanted to provide real, concrete opportunities. That’s what the Five in Focus model was all about and that echoed my vision about cultivating emerging talent at CFC Features."

So in October 2017, Fraticelli and Whyte met to glean how the Five in Focus model could translate to CFC Features’ selection process for its 23rd film.

The genius of the Five in Focus model ensures that the very process of choosing who goes through the program raises the profile of many more women, not just the final five.
Jill Golick, Executive Director, Women in View

WIV pioneered its Five in Focus initiative in 2016 at the Whistler Film Festival to promote five female directors over three years. The second iteration in 2017 was a partnership with Women in Film and Television-Atlantic and Telefilm Canada to spotlight five female directors from the Atlantic region. This year is B.C.’s Five in Focus: Animation, in partnership with Women in Animation Vancouver. Here, five female creators in animation – a screenwriter, director, producer, art director and animation director – will develop and produce an animated short film for Spark 2019.

Each Five in Focus begins with a confidential nomination committee, drawn from diverse industry decision-makers across Canada, who nominate creators whose work they find dynamic. Then a smaller selection committee/jury of three to five people forms, independent of the nominators, to select the top five.

Amber-Sekowan Daniels, WIV’s general manager, recounted the initiative’s origins. “The plan was to expand the pool and look within the community for that talent.” Jill Golick, WIV’s current executive director, then identified a key part of the model’s success. “The process gets people in the industry talking about the qualified women they know who need a shot. Everyone on that nomination committee is thinking, ‘Who could I put forward?’ Then all the nominees’ names, bios and applications are shared."

We went outside many of the typical voices and people, and included people who don’t normally participate in that decision-making and gatekeeping, all to open it up. It was incredible how diverse all these women were.
Justine Whyte, Director and Executive Producer, CFC Features

Fraticelli and Whyte started by composing a confidential nominations committee of 12 women in the industry and asked each one: which female filmmaker’s next project are you most excited to see?

The result was inspiring. Twenty-seven names were brought forward. Ten of those 27 had original new projects worthy of consideration for CFC Features’ support.

Initially, Whyte had been hesitant to abandon the open call process she’d run for years. Yet as the process unfolded and new talent came in, she was glad she’d branched out. Many on the nominations committee put forward more than one filmmaker-project. Daniels added that “this was one of the best parts of the process. Even the women who didn’t have a film that was ready still told us what they were working on. Hearing that, from women all across the country, was really exciting."

In each WIV’s Five in Focus, the jury collectively selects. CFC Features, however, historically chose its projects, albeit after benefitting from the counsel of an advisory committee in the final stage. For this partnership, Whyte and Fraticelli agreed that the jury would make recommendations, not select, after in-person interviews with the shortlisted teams. Alongside Whyte, the jury would include a director, writer and producer; a CFC Features’ program partner representative from The Movie Network (TMN); and Fraticelli, who elected to serve as an observer.

Ultimately, selection was more collaborative in practice. A powerhouse trio took shape with director Deborah Chow, producer Christine Piovesan and writer Karen Walton, who were thrilled to see this adapted model at CFC Features. They offered substantial support throughout and even after. Piovesan, for example, later joined as one of SUMMER WITH HOPE’s producers. Walton recently begun consulting on BEANS’ story. Chow gave extensive feedback that went beyond what she originally promised. The result: CFC Features has two of its most original, compelling and timely projects to support in 2019.

We can’t underestimate what it means to communities to be heard. Women know how much it means to us when we finally see true representations onscreen, but white women have had a lot more opportunities than other communities. Both of these choices are going to be meaningful to people in ways that go far deeper than the immediate value of boosting two women’s careers.
Jill Golick

Deer’s BEANS and Sadaf Foroughi’s SUMMER WITH HOPE will add to the much-needed conversations unfolding in the wider Canadian film and television industries about what constitutes Canadian content. Historically, Indigenous and immigrant women’s stories have not been told in Canadian cinema. This inequity obscures how many immigrant voices comprise Canada, and how many Indigenous voices have been displaced and silenced, sometimes violently, from within.

This is part of the legacy that CFC Features, WIV, and both the nomination and selection committees have sought to change, with an eye to broadening the conversation about who the “we” of Canada is, and what stories we typically tell.

Not only are BEANS and SUMMER WITH HOPE great stories. They are also films where women tell the story, reframing the narrative by stepping behind the camera. We’ll be looking at each of these projects and filmmakers more in 2019, but here’s a sneak peek of each director’s thoughts on their projects.

Speaking as an Indigenous woman, it is so important for a film to be going forward about the Oka crisis. There are no words to describe what that’s going to mean to the community, to have that. To have CFC championing that story is amazing. BEANS is also putting a young girl’s point of view front and centre. For younger women and generations coming up, that’s big.
Amber-Sekowan Daniels, General Manager, Women in View 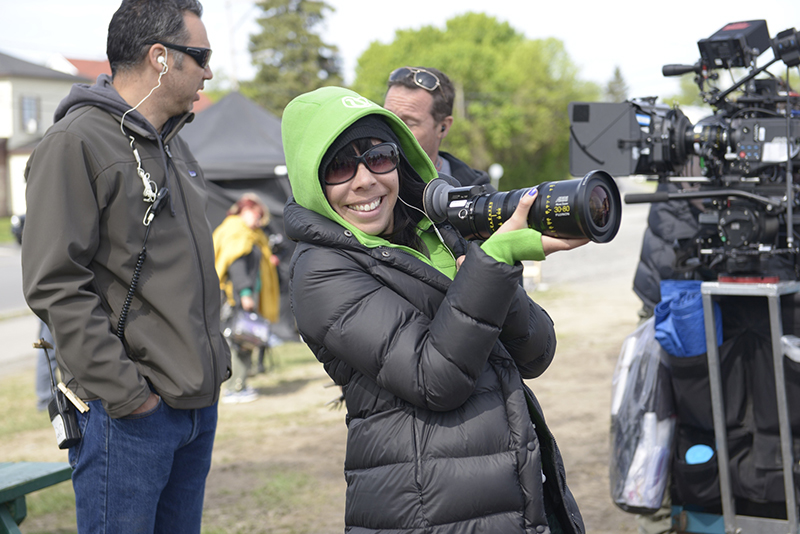 Had the Oka Crisis happened today, Twitter would have lit up. Yet as it unfolded in 1990, there was little insight into Indigenous points of view. The very naming of it as a “crisis” illustrates how Indigenous perspectives were framed as a threat to Canada.

Filmmaker Tracey Deer, creator of the Canadian Screen Award-winning, long running television series Mohawk Girls, had this to say about her life during this time and place, and how these experiences are informing her newest project:

“It was a confusing and often violent environment in which to learn about my place as an Aboriginal person in this country. That summer, we stood up to a formidable bully – and won. Canadians did not experience that summer as we did, however. The media painted us as terrorists. So while we did find our voice and have since inspired First Nations across the country to follow suit, there is still quite a large divide between Canadians and my people."

My goal is to retell the story of the Oka Crisis from the point of view of a child, whose personal coming-of-age journey will represent the same themes being played out in the armed conflict around her. The theme of the film is that true strength is about having the courage to stand up for what you believe in. Our main character Beans has to do it in her life, and the community has to do it in parallel to her journey."

SUMMER WITH HOPE follows Montreal-based Foroughi’s earlier festival hit, Ava, and shares elements of that earlier film’s coming of age theme in Iran. Her debut was one the most nominated films at the most recent Canadian Screen Awards. 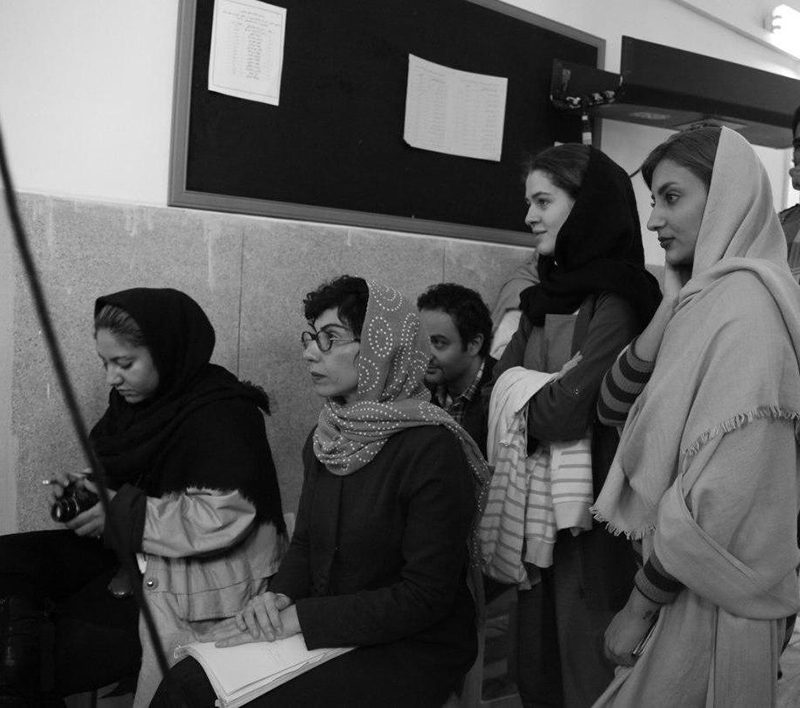 Foroughi on the set of 'Ava'. Photo Credit: Shahin Azma.

As a filmmaker who has lived in and traveled to multiple countries and regions before settling in Canada, her films explore the effects of national borders, while seeking to challenge those boundaries and recognize our shared humanity.

Foroughi describes SUMMER WITH HOPE, the second in a trilogy, as:

“A coming-of-age chamber drama, which portrays the adventure of an adolescent swimmer and his single mother in Iran today. We are not separate from the world in which we live. We are snails, as Milan Kundera puts it beautifully, and the world our spiral shell. In this spiral shell, what brings us closer together and helps us to better understand each other is to share our worldview through our stories. Film, as one of the powerful mediums of storytelling, enables me to analyze the relation between characters, their possibilities in this world, and how much more similar than different we are, regardless of geographical and cultural boundaries."

We look forward to seeing these two feature films grow. With such talented women at the helm, they will enrich, expand and nuance Canadian cinema as a whole. Whyte summed it up well. “I couldn’t think of two better people to support, and to have the CFC stand behind them, to help them have their stories heard in the most supportive ways possible.” Golick adds of the partnership, that “with every initiative like this, and with every partner like the CFC, the situation gets better. Because not only is the CFC going to work with two female filmmakers. They’re also going to be advocates for female filmmakers."

If you’re a female filmmaker, Golick and Daniels added that in the past, they’ve noticed women were sometimes reticent to apply for Five in Focus, fearing they weren’t ready. “Don’t wait!” Daniels and Golick urge. “Apply anyway. Do it wrong, even. Put that application in. Because you just may get it and juries will see your stuff. So that can promote you and raise your profile."

Apply and try anyway – good advice. Indeed, as both CFC Features and WIV’s Five in Focus model proves, one’s project might land on just the right person’s desk – and start to spring to life.

Stay tuned for more stories on these two projects and filmmakers next year!

“This program is an unparalleled opportunity for filmmakers to make a film in Canada. I am extremely grateful for the experience of MOLLY MAXWELL.”