Technology has rapidly transformed every aspect of the modern world, but progress sometimes exceeds our ability to understand it. That can make it difficult to figure out where humans fit in the broader digital landscape. At this year’s Enterprising Culture, the third annual Franco-Canadian forum held in Toronto on Friday, October 12, speakers sought to explore and restore that sense of humanity.

Since 2016, Enterprising Culture has been a joint initiative of the Canadian Film Centre Media Lab (CFC Media Lab) and the Cultural Service of the Embassy of France in Canada, among other industry partners in France. Each Enterprising Culture has been an invitation-only meeting that provides opportunities for unique discussions and exchanges between Canadian and French stakeholders and startups from the cultural, creative and media industries. Last year and this one, it expanded to Vancouver as well.

This year, the forum brought together French and Canadian academics, investors and entrepreneurs to explore the theme, “From Facts to Insights: Wisdom in the Digital Age.” It also included a  special hands-on event for children, sponsored by BNP Paribas on Thursday, October 11, which focused on new digital educational technologies. Friday’s forum then ended with CFC Media Lab Executive Director Ana Serrano receiving the insignia as a Chevalier de l'Ordre des Arts et des Lettres (Order of Arts and Letters) from the Consulate General of France in Toronto. The award was presented, in part, in recognition of her work in building the cultural partnerships that have shaped Enterprising Culture. 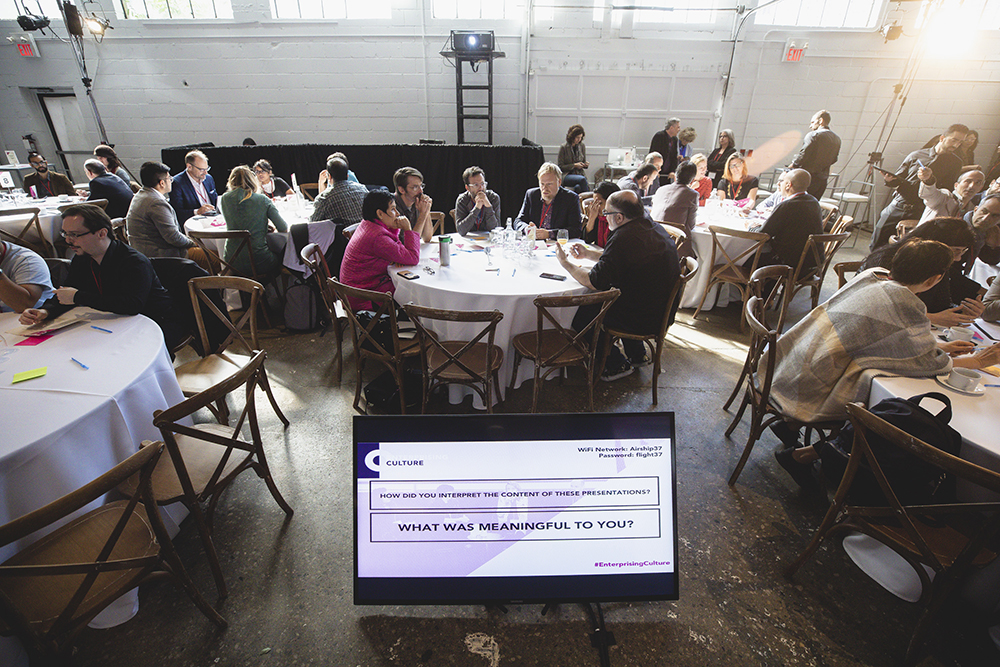 Serrano noted in her opening remarks that “even something as innocuous as a data set can be harmful when used irresponsibly. We need think more critically about the hidden dangers of the digital era to make sure we fully understand the implications of these new technologies.”

Dr. Igor Grossman of the University of Waterloo delivered the opening keynote, which stressed that “big data was generated by somebody doing something online. If that information is used without their consent, or it’s used on a larger scale and introduces certain biases, you have to be mindful of that. Otherwise, you’ll be reinstating particular social structures that may not be desirable.”

Enterprising Culture 2018 adopted a unique structure. In the morning, an opening keynote speaker was followed by a round of “lightening talks” by a panel. Then, instead of a standard Q&A, the audience spent time with each other to generate questions – to which the panelists and keynote(s) both responded. The afternoon then repeated this structure twice. This made for a more interactive and dynamic day, facilitating greater networking.

In the first lightening round, Paddle HR CEO Patrick Whelan noted that “data has the bias of whomever created it.” Paddle HR is a startup that uses hiring data to help companies retain their employees. Whelan added, “When you see a piece of data, you need to think about how it was collected and the bias that may exist within it.”

Grossman added to this point. Companies often collect data to maximize profit without considering the impact on people. As an industry, journalism provides another example. The internet allowed websites to expand their reach, but many local news outlets shut down because they were unable to compete with a business model that demanded clicks in exchange for ad revenue. That had a measurable impact on our society. 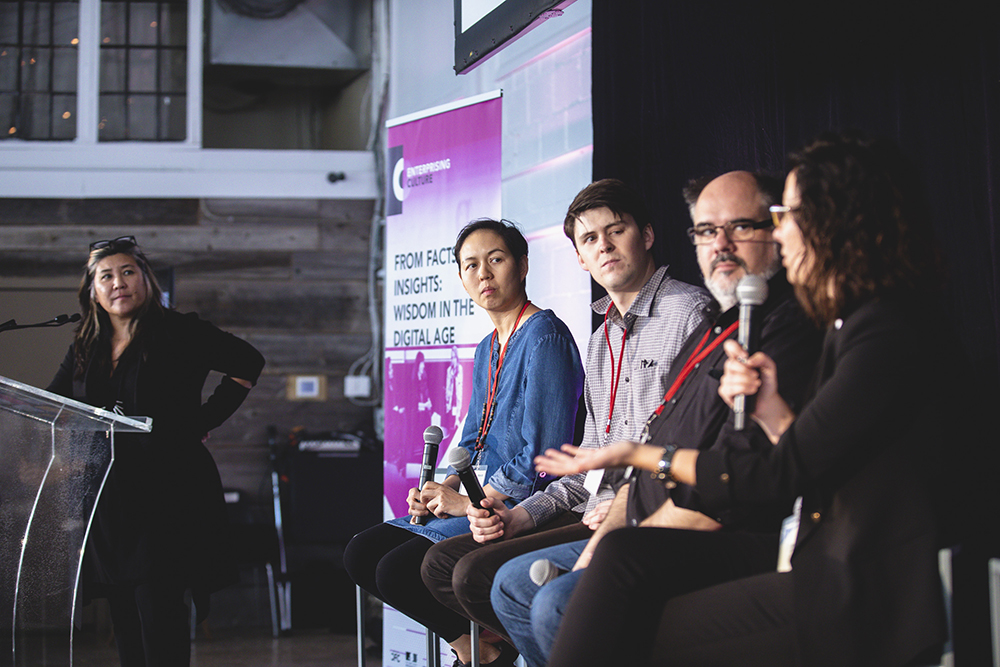 “People who live in communities that don’t have local journalism are less likely to volunteer, less likely to vote, and less likely to trust their neighbors because they’re not talking to each other,” says panelist Erin Millar, the founder and CEO of The Discourse, a community-focused journalism outlet. “There’s a real human impact not only to democracy, but to our quality of life and our connection as human beings.”

There are similar stories in virtually every contemporary industry. Algorithms that seem like great ideas as code often have a devastating impact when implemented. They do not mesh well with people’s lived experiences or emotional realities.

With a focus on wisdom in the digital age, it is no surprise that many of the keynotes and panelists focused on education and educational technologies. One of the afternoon’s keynotes was Jesse Stommel of the University of Mary Washington “The solution that technology often looks for is efficiency. When we’re talking about education, it tries to make it easier to keep track of larger numbers of students with fewer teachers. The problem is that efficiency should not be the goal. We need to create relationships and communities.”

“If we’re going to use digital tools, we have to think critically about those tools,” added Stommel. “Who has access to them? It is unethical for teachers to use or teach digital tools without understanding the political, social, and personal ramifications of those tools.” 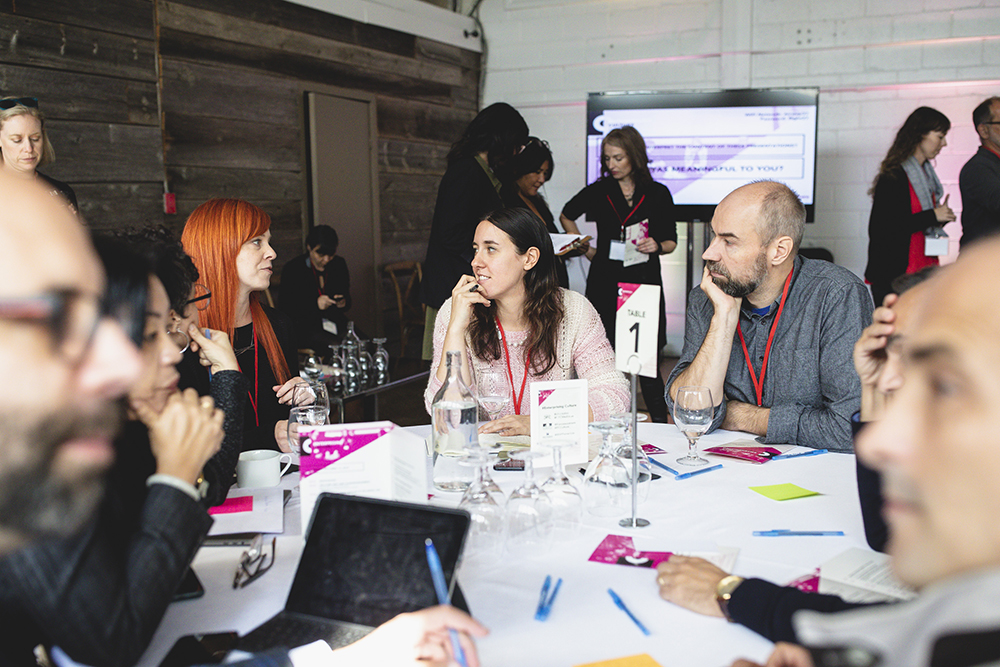 In other words, we downplay the negative side effects to technology, such as the loss of privacy. We’re expected to accept them as the cost we pay to reap other benefits of modernity. The demands of innovation become more important than our misgivings and critiques, which are reduced to mere speedbumps before an unyielding industrial machine. Enterprising Culture paused to create space for people caught in its path. Speakers assured guests that their concerns are valid, and insisted that we do have the authority to push back and reassert our rights as individuals.

“Engineers, product managers, designers – the people building these systems have a responsibility to ensure it’s being done in an ethical way,” added Whelan, whose own willingness to acknowledge the flaws in his company’s datasets represents a broader trend towards transparency. “Large companies should invest in research and development. Governments should fund academic institutions and startups.”

These efforts to curb the runaway pace of innovation are relatively recent, but indicate that a paradigm shift may be underway. People in every sector are starting to seek a more empowered relationship to technology.

“We shouldn’t make our tools invisible. We need to turn them over and poke at the underbelly,” suggested Stommel. New gadgets are exciting, but we can’t get too carried away if we want them to serve our interests.

“There is a lot of demand for stories with depth that reflect what people care about,” Millar added. “We use digital platforms to distribute. We’re just trying to do it in a more mindful way. There’s a lot of doom and gloom, but it’s heartening to hear these questions being asked in a critical way.”

In that regard, Enterprising Culture as an event sought to bridge gaps between communities often kept separate. “A lot of groups think about it [our relationship to technology], but often in isolation,” Grossmann said. “Bringing academics, practitioners, and industry to the table allows them to share their experiences from different domains.” As Renzi added, “We need to refine and forge a shared language to understand these problems. We may not come out with satisfying solutions, but at least there are attempts at digging below the surface.” 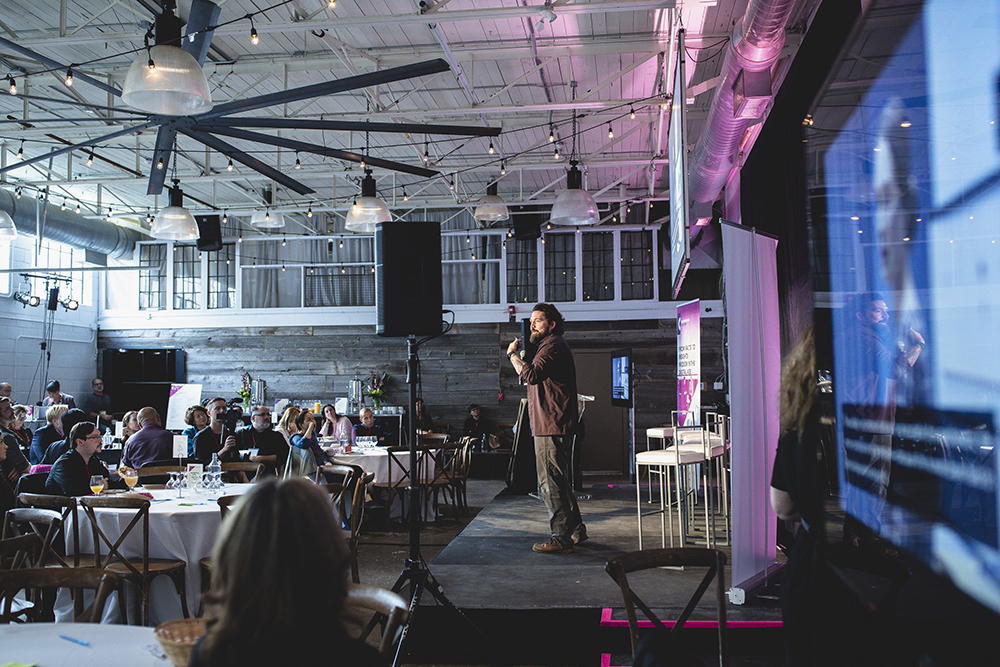 Made for Kids: Tech Discovery Day