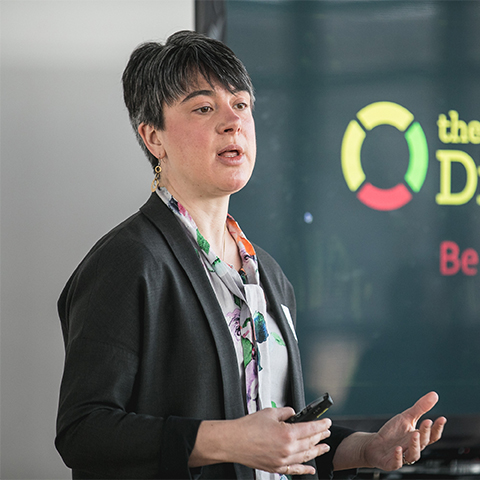 Erin Millar is the founder and CEO of Discourse Media, which produces The Discourse. She has written investigative features for publications such as Macleans, The Globe and Mail, Readers Digest and The Walrus. Her in-depth reporting and writing has been translated into 20 languages and published in 34 countries around the world — pretty impressive for a sax player who studied in jazz performance at university!

Millar is also an alumna of the most recent IDEABOOST Accelerator Cohort 7. Read on to hear more about her journey from music major to award-winning investigative journalist, as well as the importance of local media to communities and the need for diverse voices in the public dialogue.

Q: What sparked your interest in journalism?

A: Initially, I studied music during my undergraduate years— to be specific, saxophone performance at the University of British Columbia, which has a fantastic jazz program. I got interested in journalism because the student newspaper was such crap. That was more or less it. I’m a problem solver, so I want to get in and start fixing things myself.

What happened was that the student newspaper, for their Valentine’s Day issue, published a bunch of pornography. I thought, “What is this?!” Then I showed up at a meeting to ask, “Why are you publishing pornography in this student publication that is paid for by student dollars?” They didn’t have a good response. So I got together with a couple other people and said, “Let’s take this place over.” We formed a coup in the next student election and I became the editor. So that’s how I got into journalism.

Q: Can you make connections between your study of jazz music and the work you do now?

There are a lot of similarities, actually. Not just the improvisation: I studied concepts like counterpoint, harmony, tension and release, and the form of a piece of music. All of these concepts are really about creating a narrative, and that is fundamental to how humans experience art. Those are the same concepts that I then brought to my writing, especially feature writing. I moved over to Macleans, and then worked freelance overseas for The Walrus, Readers Digest and The Globe and Mail, writing mostly longer-form features.

I also think studying jazz performance gave me a way of learning that helped. It’s very much about studying from the greats and practicing through mimicry, really understanding how the greats put together these performances. Eventually, through all of that close study, you evolve your own voice. So I took that same approach to studying and mentorship and applied it to writing.

Another thing I got from music school is that they’re teaching you to be entrepreneurial: to be self-employed, to put together bands, to market those bands, to find different channels to make money, all of these tasks and concepts. I was exposed to an entrepreneurial approach that has served me well in my journalism career. It was very good training.

From there, I got hooked, and eventually became the President of the Canadian University Press, which is a student news organization founded in 1938. It’s a very cool organization. I moved on to work at Macleans. Yet initially, I was a music student. I never actually studied journalism.

"The main thing – really the number one thing I gained – was relationships. I came away from IDEABOOST with a network of extremely high-level supporters specific to my industry, people who spent three months giving me great feedback on the business."

Q: Why is The Discourse so necessary?

A: Oh, so many reasons. The Discourse is necessary because journalism is a key part of the social fabric that unites our communities. As we’ve seen the industry contract and advertising business model fail, we’re losing more journalists and media outlets. That matters because these losses have an impact at the community level. There are large portions of the Canadian public that are not represented in our national narratives, which are informing policy. What we’re all about at The Discourse is directly serving underserved markets in media. We’re widening, improving and making more diverse the voices informing the public dialogue — and that’s impacting what we do as a society together.

That’s what we’re all about. It’s critically important at this particular moment in time, when we’ve seen a lot of co-opting of our media environment through social media and our politics to fuel polarization and misinformation. It’s a worthy thing to dedicate our time and talents to creating something that builds trust with communities again and improves our public discourse.

Q: Can you identify some highlights of your work with The Discourse so far?

A: One of the early projects we did that I’m most proud of, because of its impact, is this data journalism project, Justice Is Not Blind, which looks into racial profiling by police against Indigenous people in Western Canadian cities. Macleans brought us this project. One of their reporters, Nancy Macdonald (who’s now with The Globe and Mail), had heard a number of stories from Indigenous people saying that police were racially profiling them. Whenever she brought those stories to police, they would say, “Oh, that was just a one-off case,” or “This person had a chip on their shoulder,” or it was a “Bad apple cop,” or whatever – whereas the people she was listening to were saying, “There’s a wide systemic issue at play here.”

Yet there was no data. And police would not make available any data about ethnicity in their traffic stops and other interactions. So we compiled original data about that and found that yes, there was a systemic issue at play. It was so important because we were genuinely responding to a gap of information that was not in the public before. A number of academics cited our research, and an inquiry that at the time was looking into the death of an Indigenous man in police custody led to policy change. Police are now under more scrutiny to release data under the Freedom of Information Act in Saskatchewan.

In journalism, so often everybody complains about insufficient resources. We’ve lost so many jobs and all kinds of stuff has changed. Yet I think we’re really inefficient with how we apply resources a lot of the time. When we have 25 journalists all covering the same last day of Jian Ghomeshi’s trial, for example, it’s not like they’re writing 25 original stories that create value for all of their communities.

In the case of my example, doing the analysis and being strategic about providing value generates a larger impact, especially by collaborating with other media outlets to ensure that the work reaches the audiences that will make change. This story captures a lot of the core things about The Discourse. That database continues to this day and in 2017, the project earned a coveted Edward R. Murrow Award for excellence in investigative reporting by a small digital news agency. 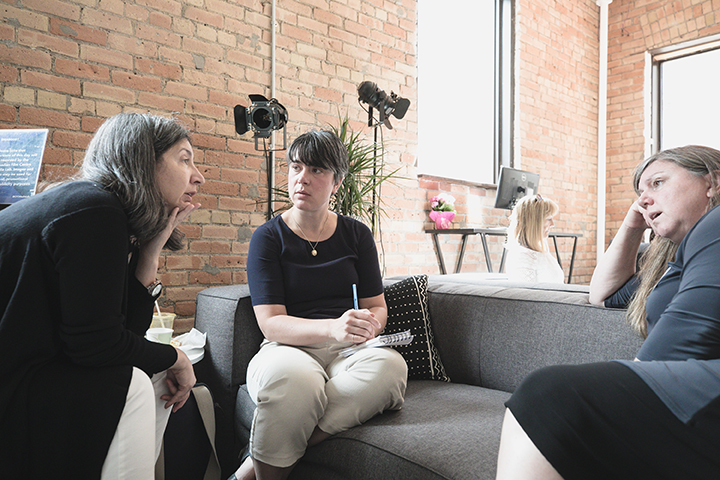 Q: Has your connection with the CFC Media Lab’s IDEABOOST Accelerator helped shape The Discourse?

A: It was an amazing experience. The quality of mentorship and the network that I came away with are both extremely valuable to the business. They really honed my thinking, challenged me on multiple levels, and accelerated our progress. They also helped us focus and winnow down what we were doing so that we could have more impact, and more quickly. Ana Serrano (IDEABOOST’s managing director) is amazing. She’s my main mentor and continues to support us. I still speak to her weekly.

The main thing – really the number one thing I gained – was relationships. I came away from IDEABOOST with a network of extremely high-level supporters specific to my industry, people who spent three months giving me great feedback on the business. Now I will carry forward those relationships.

Q: What’s the best professional advice you’ve been given?

A: This isn’t only professional, but it’s from one of my mentors, Anne Giardini, a recently retired CEO who is now the Chancellor of Simon Fraser University. She’s written a bunch of novels, and is the late Canadian novelist Carol Shield’s daughter, so she oversees her mother’s estate. She has a family, a beautiful home, volunteers on a million things, and she mentors me. So I asked her, “How the hell do you do it? Because I feel like I’m losing my mind here, only doing half the stuff you’re doing.” She had the best advice. “Oh, I just say yes to everything that seems interesting, and then I forgive myself when I screw some of it up.”

Q: What’s next for The Discourse?

A: Hmm, that’s actually a tough one to answer because we’re right in the middle of rethinking all of that. But I would say: continued growth! We are building The Discourse into a national player in Canada. We want to see be a household name recognized for its impact and community-based work. I would invite readers to check out The Discourse and our work. There’s some amazing about journalists doing impactful work, and we only do it with the support of our community. 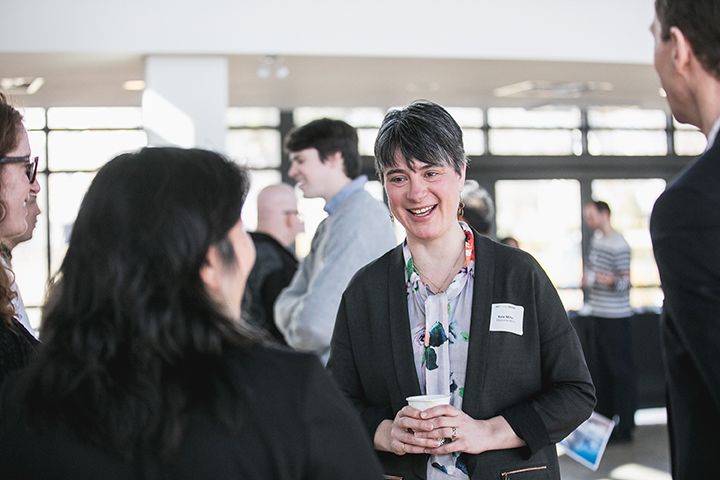