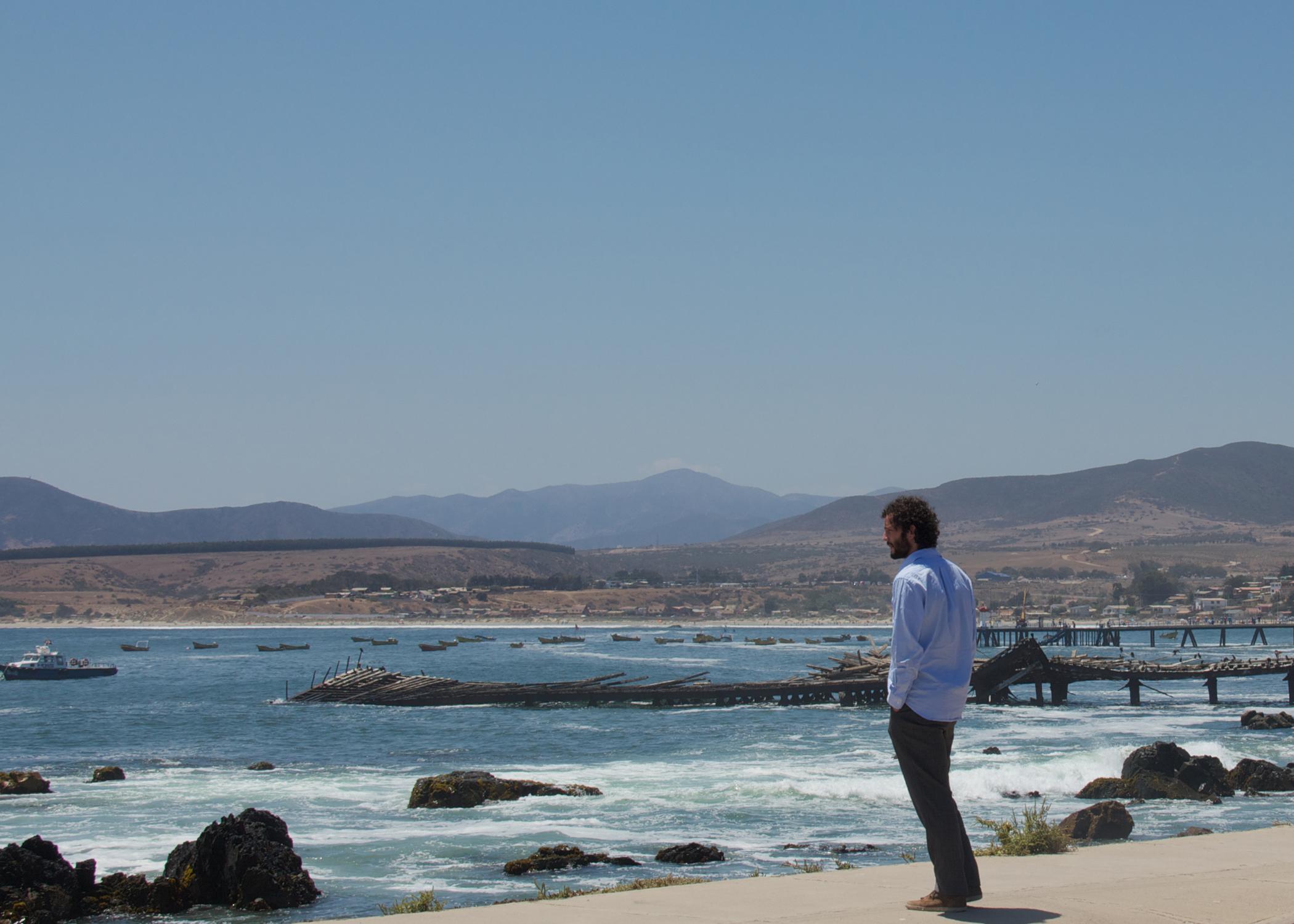 On lucky Friday the 13th (July 13, that is), the Canadian Film Centre (CFC) was proud to present two film screening events at the dynamic new Harbourfront Toronto festival, Brave: A Festival of Risk and Failure. Audiences were treated to the feature He Hated Pigeons from CFC alumna Ingrid Veninger with a live score performed by CFC/Slaight Music Residency Alumnus Casey MQ (Casey Manierka-Quaile), as well as a curated selection of three short films made by CFC alumni early in their careers.

Continuing through July 29, the Brave Festival presents some of the world’s most courageous and outlandish artists, thinkers, writers and musicians. These artists embrace risk in a spirit of trailblazing that we at the CFC also foster. The CFC is celebrating our 30th anniversary this year, and we could not have lasted this long by playing it safe, not amid the last three decades of upheaval transforming – and continuing to change – digital screen-based entertainment. So we were happy to join Harbourfront and this festival in living out the motto: no risk, no reward.

Friday’s film events were free and held in the large, open-air Concert Stage on the water. They showcased outstanding CFC talent and content to a broader public, including the rewarding, rarely-seen feature, He Hated Pigeons, from CFC alumna Ingrid Veninger, with a live score performed on the spot by talented CFC/Slaight Music Residency Alumnus Casey MQ (Casey Manierka-Quaile). Casey MQ is a Canadian composer, singer, songwriter and record producer from Toronto whose music blurs ambient productions and melancholic soul, distorted club music and electronic pop.

Each of the He Hated Pigeons’ screenings feature an improvised, unrecorded musical performance, making for a unique, unrepeatable event. Although Veninger could not attend (she was in Barcelona editing her latest feature), we were fortunate to have venerable Canadian indie music icon Jane Siberry as screening host – a perfect choice given that she also live-scored He Hated Pigeons for the Female Eye Film Festival in 2016. 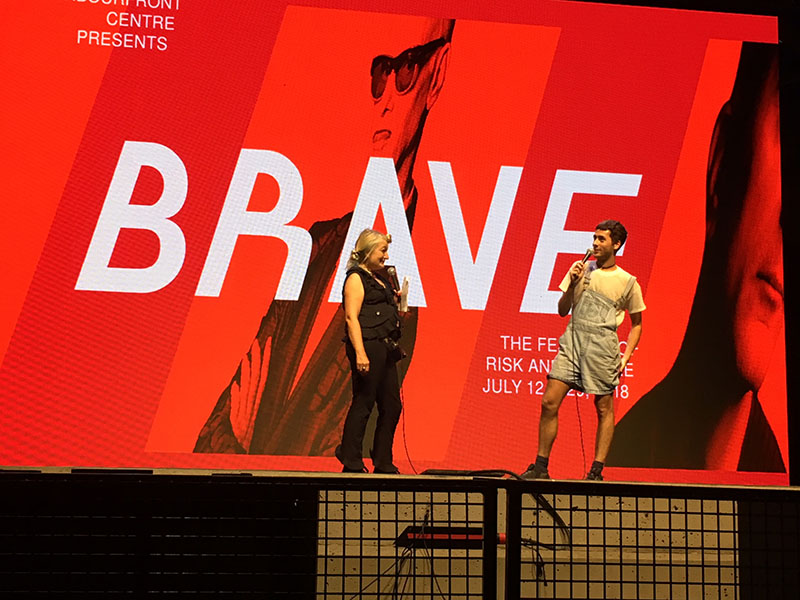 Jane Siberry and Casey MQ in conversation after the screening and live performance of 'He Hated Pigeons.'

Improvising a film score before a live audience is daunting under optimal circumstances. Veninger, however, adds additional restrictions to insure spontaneity. The musician can only view the film one time before the performance. Harbourfront as a space contributed its own soundtrack: loud laughter from nearby bars, crackling seagulls, barking dogs along the pier, whooshes of waves rolling in and planes taking off. Casey MQ took it all in stride, working these ambient sounds into his understated electronic score to enhance the story of grief, longing and memory.

He Hated Pigeons chronicles the story of a young Chilean man, Elias, who embarks on a spontaneous solo trip through Chile after the unexplained death of his Canadian boyfriend – a journey his lover had wanted them to make together. The film treats its themes and characters gently, finding emotion in the score. Grief’s eloquent silences surface against stunning landscapes that morph from ocean to forest to desert as Elias drives South.

In addition to sound and melody, Casey MQ’s score deftly incorporated recorded breath and breathing, a motif that accentuated Elias’ struggle to bear his lover’s death. The score as a whole lent the film’s numerous beach and cliffside scenes an undertone of sadness, rage and isolation while, for example, Elias rests on a beach alone, surrounded by sunbathers, playful children and crashing waves.

Rather than ceasing a melody at each scene’s conclusion, Casey MQ often continued to let the sounds and melody of one scene trail into the next. These sound bridges layered emotions across scenes, suggesting the palimpsestic stages of Elias’ various journeys: through Chile; through his memories; and through the ambivalent terrain of his own grief. For all of death’s finality, the film and its live musical performance suggest that for those who go on living after a loved one’s death, much of life after remains open-ended and uncertain. 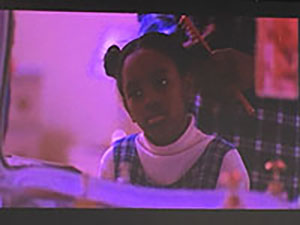 Just before the screening of He Hated Pigeons, the Festival also showed CFC Presents: Celebrating Bold Storytellers and Their Short Films, three short films made at the CFC by notable alumni, films that experiment with modes of storytelling and creative expression: We Wanted More, directed by Stephen Dunn, a hypnotic psychological thriller about a singer who loses her voice pre-world tour; Evelyn: The Cutest Evil Dead Girl, directed by Brad Peyton, a dark comedy about a lonely dead girl seeking new friends; and Short Hymn Silent War (see left), directed by Charles Officer, a quietly moving drama of how four African-Canadian women are altered by gun violence. 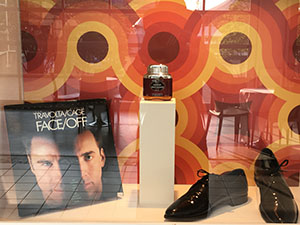 Also at the Brave Festival were several accompanying art installations, including the playful Pop-Up! Museum of Failure (see right), which displays and chronicles failed product launches for items like laser discs, Google glasses, purple ketchup and the “Growing Skipper” doll; the intricacies of a collective creative process in Exchanges: Dialogue, Hesitation & Creation, from the Feminist Photography Network’s Online Residency; and Harbourfront Centre’s inaugural Visual Artist-in-Residence Sean Martindale, whose project with JP King offers the mesmerizing large-scale Our Desires Fail Us.

“Don’t behave. Be brave” is the Brave Festival’s maxim. We’re proud that these CFC alumni, their films and Casey MQ’s live music all – like the wider Festival – favour risk over restraint, experimentation with rather than adherence to rules, and work that takes both artists and audiences on unexpected journeys. These artists and the broader festival invite us all to be brave, venture forth, and see where the path of creative (re)invention may lead.

The Brave Festival continues through July 29; check out what's still to come.