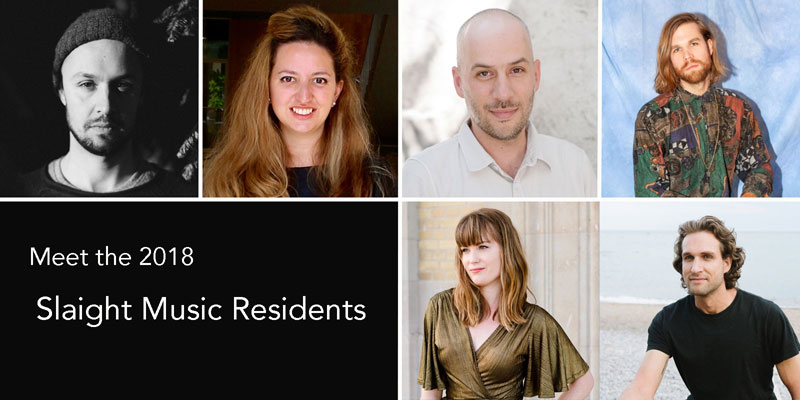 We’re pleased to announce the 2018/19 Slaight Music residents who will be starting at the CFC on Monday, July 16, 2018 (alongside the previously announced 2018 CBC Actors Conservatory and Cineplex Entertainment Film Program residents).

The CFC received another round of exceptionally strong candidates for this year’s Slaight Music Residency. Six music creators, including a songwriting team, have been invited to participate in this year’s Slaight Music Residency, a creative and business initiative for composers and songwriters that is chaired by Juno Award-winning singer-songwriter Marc Jordan and celebrated composer and musician Lesley Barber.

“This group is incredibly accomplished and brings an exciting range of experience and sounds to the table,” says Gary Slaight, CFC Board Member; President and Chief Executive Officer, Slaight Communications Inc.; and patron of The Slaight Family Music Lab.“They are going to benefit from the traction this program and our alumni have built over the last six years, and I have no doubt they will emerge as even stronger music creators with a lot to offer the film and TV industry.”

Since its inception, The Slaight Music Residency has had many talented, multifaceted and innovative music creators come through its doors – like Jeffrey Morrow, who scored Olaf's Frozen Adventure (alongside Christophe Beck) and was nominated for an Annie Award for his work. Or Erica Procunier, who scored the award-winning feature Don’t Talk to Irene and CBC series Little Dog. Or Robyn Dell’Unto, who was presented with SOCAN’s No. 1 Song Award for “I See Gold,” which topped the CBC Radio 2 Top 20 chart in January 2018. Or Ben Fox, who was nominated for a Canadian Screen Award for his original score on the multi-award-winning feature Never Steady, Never Still. Or Aimee Bessada, who created music for the award-winning CBC webseries, How to Buy a Baby. Or Todor Kobakov, who has been recognized for his work on several productions, including features Backstabbing for Beginners and Born to Be Blue, and TV series Cardinal (for which he won a Canadian Screen Award), The Indian Detective and Bitten. And so many more incredible composers and songwriters!

Read about our 2018/19 Slaight Music Residents below. We asked the incoming music creators what specific piece of music blew them away recently and the reasons why. Here’s what they had to say:

Suad Bushnaq is a Toronto-based musically multilingual Arab-Canadian film and concert composer.Hailed as 'reflective and touching' (BBC) and 'seriously beautiful' (John Welsman, award-winning composer), her music has been performed by orchestras like the Vermont Symphony and the Syrian Expat Philharmonic at venues such as Konzerthaus Berlin and the BOZAR. Additionally, Bushnaq has scored a number of award-winning films that toured international festivals, including Dubai, Edinburgh and Hot Docs. Bushnaq won a Silver Medal for Outstanding Achievement in Original Score at the 2018 Global Music Awards.

What recent piece of music blew Jason away? “’The Alien’ from Annihilation really inspired me – both as an exercise in simplicity and a beautiful demonstration of the storytelling power of texture.”

Jason Couse is a Juno Award and Polaris Prize-nominated performer, songwriter and composer from Toronto. As a longtime member of the art-pop duo The Darcys, he has toured abroad, charted on commercial radio, and received critical acclaim for four full-length label releases. Couse is a two-time Banff Centre Musician in Residence and a SOCAN “On the Island” songwriting camp participant.Beyond his frequent collaborations as a co-writer and producer, he is exploring the intersection of his musical experiences and influences with his love of film.

What recent piece of music blew Ashley and Timon away?

Ashley Jane: “The Sufjan Stevens song ‘Mystery of Love’ in Call Me By Your Name was mesmerizing and perfectly captured the emotions of a beautiful moment.”

Timon Wientzek: “I loved the Drive soundtrack. When it first hits you with ‘Nightcall’ after the car chase, you know it's going to be a great movie.”

Ashley Jane and Timon Wientzek are a songwriting duo from Toronto. Their music has been showcased on television programs such as CBC’s Heartland, Kim’s Convenience, Workin’ Moms and CTV’s Saving Hope, as well as in commercials and award-winning independent films. In 2016, Jane and Wientzek released their debut EP Changing Tides under the name In the City. Together, they create beautiful story-driven music in a variety of genres and styles.

What recent piece of music blew Stephen away? “‘Dawn: Making an Effort’ by The Breeders in the trailer for Kidding was perfect – naïve sincerity set against calamity, heartbreaking and uplifting at once.”

Toronto-based composer, songwriter, producer and multi-instrumentalist Stephen Krecklo has contributed music to a wide variety of television and film content, ranging from reality and documentary, to drama and children’s programming. Krecklo’s credits include Carter (Bravo), Ollie: The Boy Who Became What He Ate (CBC, Sprout and Universal Kids), Stranded with a Million Dollars (MTV Networks), Property Brothers (W Network/HGTV) and the indie feature The Go-Getters. A versatile writer, Krecklo has also composed commercial music for such major brands as Toyota, Kia, Bell, CIBC, Pepsi and Participaction. As a performing musician, he has toured and recorded with artists such as K-OS (Dine Alone) and Small Sins (Astralwerks).

What recent piece of music blew Antonio away? “The score for Jackie, because of Mica Levi's ability to simultaneously express the tremendous sorrow, strength and grace that Jackie Kennedy exuded in the face of such a terrible, public tragedy.”

Antonio Naranjo is a Toronto-based film, television and commercial composer, multi-instrumentalist, songwriter, and music producer. A Banff Centre for the Arts alumnus and member of pop rock bands Boys Who Say No and Future Peers, Naranjo has recorded and toured internationally – sharing the stage with Born Ruffians, Mac DeMarco, Kevin Drew and The Flaming Lips. In addition to a number of commercial, film and pop music credits, Antonio will be scoring the upcoming CBC Kid’s adventure series Detention Adventure.