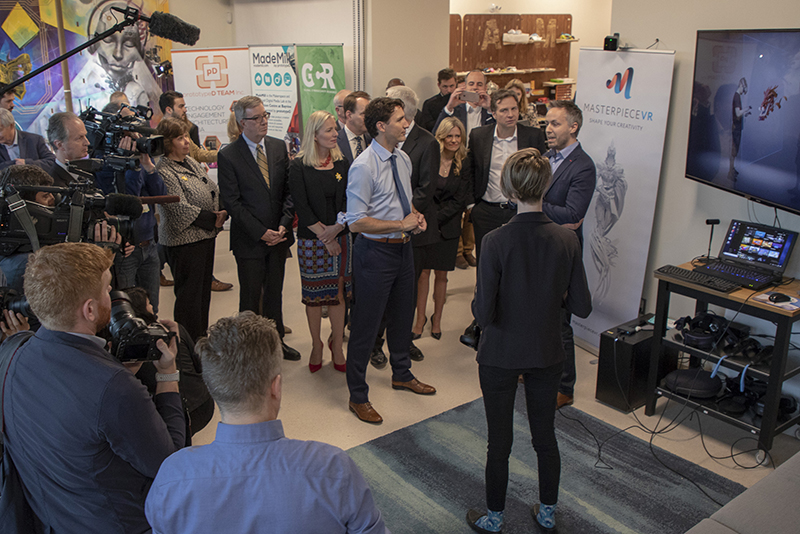 Prime Minister Justin Trudeau engaging in a demo with Jonathan Gagne, founder and CEO of MasterpieceVR.

The sole company selected to demo for Prime Minister Trudeau, MasterpieceVR showcased their collaborative VR platform that simplifies 3D sculpting and painting. They surprised Prime Minister Trudeau with a full body sculpt of him as Han Solo, created in less than two hours, as well as a 3D print of this model, printed that same morning.

During his visit, the Prime Minister also met with other entrepreneurs at Bayview Yards, whose programs, services and space itself seek to catalyze startup growth, commercial success and economic impact in a growing Ottawa tech industry – of which MasterpieceVR is a key player. In the past six months, they’ve won a Best Ottawa Business Award for #NextBigThing, were nominated for best Creative App of 2018 by UploadVR, and have recently been nominated for an Auggie Award for Best Creator and Authoring Tool. 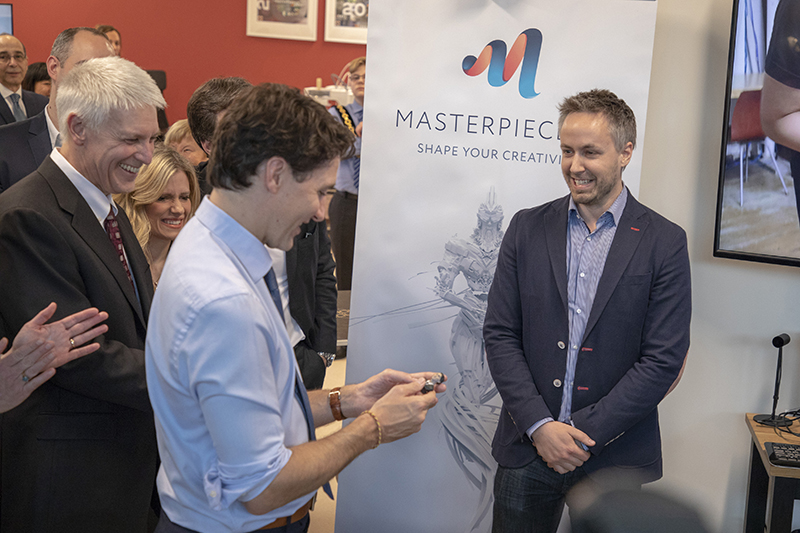 Prime Minister Trudeau smiles at his 3D-printed action figure, himself as Han Solo!

In 2017, MasterpieceVR’s parent company, Brinx, participated in the Canadian Film Centre Media Lab’s (CFC Media Lab) IDEABOOST Accelerator as part of Cohort 6. At the Enterprising Culture Forum, MasterpieceVR was the Canadian recipient of the Cultural Start-up Award. This juried competition awards key commercialization opportunities to two companies, one Canadian and one French, for intensive immersion and commercialization activities at, respectively, La Gaîté Lyrique in France, and CFC Media Lab in Canada. The Government of Canada supports CFC IDEABOOST and Enterprising Culture through funding from the Federal Economic Development Agency for Southern Ontario.

Finally, at the demo, MasterpieceVR also shared their work with Prime Minister Trudeau about an exciting current partnership with Microsoft. The Sustainable City Contest aims to inspire artists around the world to imagine and create a model, by using MasterpieceVR, of an environmentally sustainable city. Deadlines for submissions take place in two phases this month (on May 15 and May 29), so there’s still time to get busy envisioning!

Congratulations to the MasterpieceVR team for their recent awards, partnerships, and ongoing high-quality work in innovative 3D solutions – visit them here to learn more.