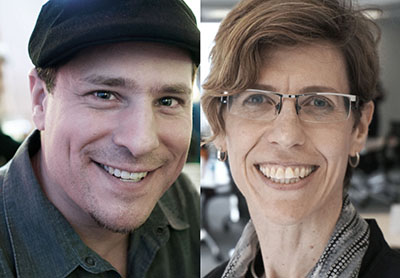 As individuals, Matt Gorbet and Susan Gorbet are each incredibly talented. Yet as a team, there’s no doubt in their minds that they create better work together than on their own. Partners in life and work, this highly collaborative duo has been running Gorbet Design Inc., a Toronto-based experiential art and design firm, for more than 15 years.

Their work defies easy description. Two of their previous art and design projects were a solar-powered work of public art in Cambridge, Ontario and a 20-foot interactive obelisk at Toronto’s Royal Ontario Museum — with much more in between. Their current focus has shifted toward helping other people do creative things with technology through education, an approach that informed their work as faculty for the TELUS Interactive Art and Entertainment Program at the Canadian Film Centre’s Media Lab (CFC Media Lab).

Read on to discover more about the Gorbets’ work, their time at the CFC, what working closely with one’s spouse is like, and why it’s important to always ask, “So what?”

How did you both end up doing the kind of work you do together?

Susan: I’m an experience designer, and have degrees in psychology and computer science. I went out to the San Francisco Bay Area for graduate school, and that’s where Matt and I met in the mid-90s. His background was with the MIT Media Lab, with degrees in architecture and also training from CFC Media Lab itself. He was working in tangible media, which is that intersection between the physical world and the digital world.

We’ve always both been interested in places where you invent the rules rather than follow them. We’ve always helped each other and talked about the things we’re designing, and when we moved back to Toronto, we wanted to work together. For us, it’s as much about building a life as it is building a business. Working together lets us have design meetings at 11 p.m. in our pyjamas.

Matt: As Susan said, we’ve both been interested in pushing boundaries and looking for new, creative ways to use technologies and create experiences for people. That led us both down that same path of working in a design practice and methodology that’s focused on trying to invent or discover what the right way to do these things are, rather than doing what other people have been doing or what we’ve been taught. It always seemed there wasn’t much space to do that, except by doing it together.

Can you describe some highlights from your years of working together?

Matt: We do different kinds of work. On the one hand, we’re very interested in creating new things, whether in the world of art installations or experience design for people in the physical world. On the other hand, a big part of what drives both of us is education and helping people learn. [We value] teaching and exploring these new things and experiences that we can create for people, or how to use technologies or create experiences that help people be more creative with one another.

We’ve had many different flavours of projects. Some of them have been more creative and artistic, and some more practical. One of the big ones was when we spent several years doing a master plan of sorts for the San Jose International Airport in California, helping figure out a framework by which they could create an art and technology program, the art activation project. That project is in some ways exemplary of the kind of work we like to do. It brought together all kinds of different types of problems that we had to examine solving, what kinds of questions to ask about those problems, and how to bring them together to create something new.

Susan: I think that project also exemplifies one of the secrets to our longevity in working together. Not only do we work deeply and collaboratively with each other, but we almost always collaborate with other people, too. On the art activation project, we worked with Banny Banerjee, who was head of the Product Design Program at Stanford and a senior designer at IDEO. Working with people like him who are truly fantastic, who bring so much that we don’t always have into our collaboration: that was one of the highlights of that project.

What’s some of the best career advice you’ve ever received?

Susan: Once long ago, in a career workshop someone was talking about creating resumés and one of the things they said very clearly was: “So what?” You did that thing, so what? What did it accomplish? What would have happened if you weren’t there? What was important about that thing that you did in the world?

I’m telling you, I’ve helped a lot of people with this advice. If you do a resumé this way, it really makes it sing. This idea of “So what?” is also fundamental to how we work as designers and educators; we’re always asking questions with what we do. Every design is a question, not just an answer or solution. By asking questions and understanding the bigger frame of what you’re doing — So what? What does it mean? — one can make something to feel good about that has an impact in the world.

Is there an easy way to sum up your design work?

Susan: As artists, one of the things that is different in our approach is that we don’t have a medium. We look at the situation, context and environment and ask, “What’s happening here, and therefore what makes sense to do in this world?” As a result, our pieces are incredibly different from each other, which creates a difficulty sometimes for galleries and curators, because the art world really wants artists to work in one thing so they can say, “Oh, that’s the ‘nixie tube guy,’ or those are the ‘light artists.’” But that’s not actually our work at all. There’s no one thing that could describe everything we do. We have mechanically moving pieces, we have pieces that work with light, we have a telematic piece that you interact with over the web, and a lot of our work is very intimate and interactive in a personal space — but not all of it — so it’s all these different dimensions. That’s partly because we are always looking for our mantra. We’re always asking, “So what?” I feel like the Solar Collector [commissioned by the Region of Waterloo and launched in 2008] is a good example.

Matt: With the Solar Collector, the whole concept was that if it’s going to be a solar-powered piece, it should be solar. It should reflect the ideas of solar energy and solar power. So that informed the whole form of the piece. Whereas for a piece like the obelisk that we did for the Royal Ontario Museum (ROM) [in 2007], we were taking a different set of constraints about longevity, and about being able to honour donors for their contributions.

Susan: Yes, one of the ROM’s mantras was that they’re all about artifacts that tell stories. So we basically created an artifact that tells a story about the donors for donor recognition. With the Solar Collector, on the other hand, it was about this connection between the public and this space. Because they had asked for a solar-powered piece, our mantra was, “If it’s solar, make it solar.” So many solar-powered pieces have a little tree of solar cells off to the side, and then they have the piece, and they’re two completely separate things. For our piece, the way that solar power works — and even the math of the way the sun moves through the sky — is all reflected in the forms of the piece. That kind of connection and mantra-making is how we approach all of our pieces. 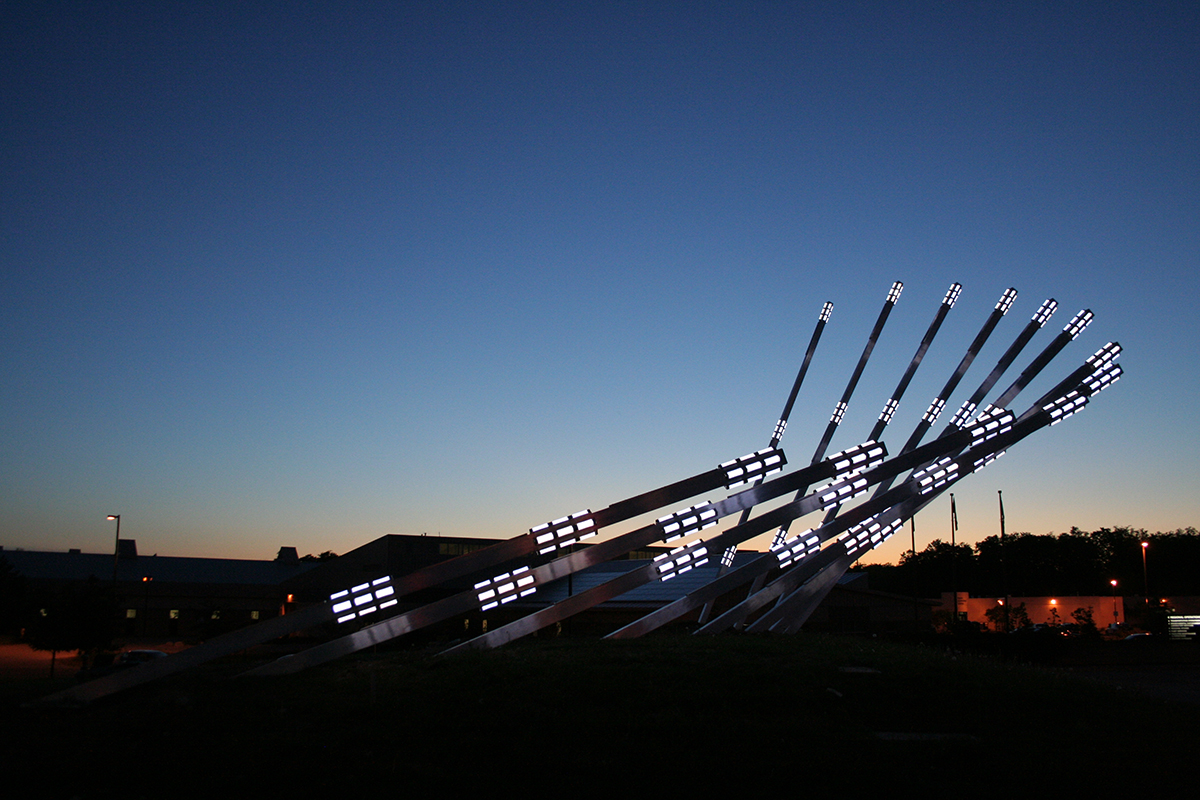 Describe your time as faculty at the CFC. You may have been the teachers, but what did you learn from the experience yourselves?

Matt: We were part of the faculty of the CFC Media Lab’s TELUS Interactive Art and Entertainment Program, or IAEP. We started in 2002/2003 and were on the faculty of that program until 2011-12, about a decade. Over that time it grew and changed, but essentially it was a residential program for people exploring new media projects. We did crits on that program, and we also each taught a different section. I taught a section called “Beyond the Screen,” which was about forms new media can take, which emphasized creating tangible and physical experiences in the world.

We didn’t teach together in that program, but we did do crits together and helped shape projects for the residents. That was a great experience, to be able to help people shape projects from concept to realization. One of the major things that was successful about that program was how it brought people together to collaborate. Collaboration has been such a big part of the way we work, and we think people should work in these fields. So being able to help people understand how to collaborate, work together, and draw on other people’s skills was a real joy.

Susan: I taught not just experience design, but also did a project process and documentation section. That was a kind of coaching with the residents, an after-crit moment in the program. I gained a deep understanding of collaborative groups and the way that collaboration really works — and that has informed everything that I’ve ever done since. We teach creative collaboration now. In the corporate world, we help people understand how to run strategic conversations to a good result. Working together in that creative, collaborative way is just the way that things are in the world now, and I gained a lot of insight into that approach during my time at the CFC.

What’s on the horizon for Gorbet Design Inc.?

Susan: One of the ways that we think about our career is that we spent the first 10 years creating installation work — interactive physical installations in public spaces, both art and design — and we’ve spent the last six or seven years doing what we think of more as brain work. We have moved more into helping other people do creative things with technology; helping others learn how to collaborate creatively, in terms of strategy; teaching/coaching in the corporate environment about facilitation; and about design and what they call “design thinking.” It’s always exciting to bring new ideas to people.

What’s it like to work so closely with your spouse?

Matt: We get asked that question a lot. There are a lot of challenges, but there’s an incredible amount of reward as well. The one thing that has kept us going this long is this absolute conviction that what we create together will be better than what either of us could have made alone. That lets us work through processes that can be trying sometimes.

Susan: Yes, that deep knowledge that even if it’s making me crazy right now, everything we do together is better than things that we could have done individually — that’s what really carries us through.

This interview has been edited and condensed for publication.