By Dana Lacey and Margaret DeRosia 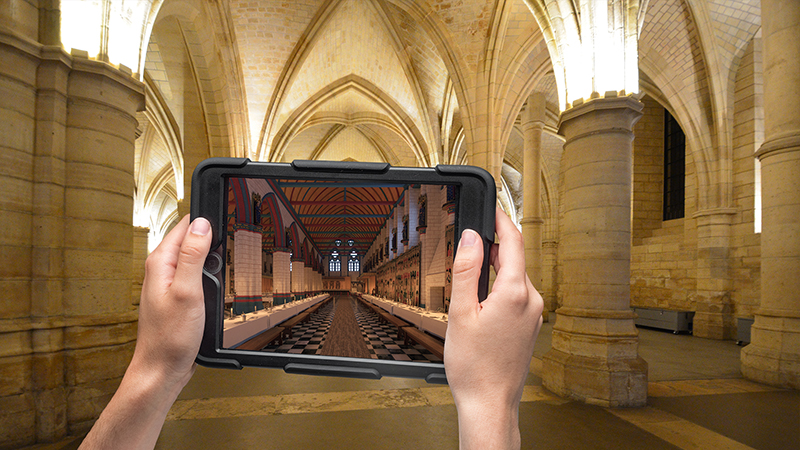 Histovery (Winner of the 2017 French Cultural Start-up Award) created this product, Histopad, seen here in use at the Palais des Papes. An augmented reality product, it was designed for cultural institutions specifically to enhance museumgoers' experiences.

In early March 2018, a guerrilla art collective called MoMAR launched an unsanctioned augmented reality (AR) installation inside the New York City Museum of Modern Art. The installation lets viewers interact with animations crawling across Jackson Pollock’s famous splatters. In January 2018, Google’s Arts & Culture app rocketed to the top of iOS and Android download charts. Its feature? Users take a selfie, which then matches their pic to a series of similarly-featured portraits in galleries around the world.

These projects represent novel ways of people embracing art during a time when museum and gallery attendance is declining. They offer Instagram-friendly experiences that create their own engagement with art. Immersive media technologies like augmented and virtual reality (AR/VR) can enter the museum and gallery space to help generate new and enthusiastic attendees. Yet projects like MoMAR’s can ignite familiar debates. What qualifies as art? Whose stories get told? Who decides how people should or should not experience art?

Some cultural institutions are beginning to embrace AR and VR as a component of the exhibition experience. These projects may enhance or extend a new understanding of art works by immersing visitors in a piece of history they normally could not see or touch. AR can add whimsy to walking through a curated space, personalizing what can be seen and felt – something the recent French Cultural Start-up Award-winning company Histovery understands well with their "augmented visit" solutions.

Tech companies and media foundations, eager to reach a wider demographic and evolve VR and AR as immersive media technologies, can help offset the financial investment these new technologies require. Cultural institutions are taking a risk on the unknown, investing in expensive new technologies, but these cost barriers also provide an opportunity; most people lack the means of viewing AR or VR at home, so their presence at an exhibition may drive people to attend. These institutions can pioneer new technologies, with AR and VR enabling curators to dream up new ways to tell stories, attract visitors, and expand their own curatorial practices.

Read on for a sampler of recent immersive media technologies at work in galleries and museums.

Museums and galleries are beginning to employ AR to reimagine the traditional audio tour of their exhibitions and collections. A Royal Ontario Museum app uses AR to bring its most popular dinosaurs to life, enabling the experience on iPad stations within the museum, or by having viewers download the app and use it on their own mobile devices. In July 2017, the Art Gallery of Ontario (AGO) launched ReBlink. Here, Toronto-based digital artist Alex Mayhew adopted AR so that viewers could see a range of paintings in the AGO’s collection come alive in unexpected ways.

In 2017 in the U.S., the Detroit Institute of Arts (DIA) premiered, Lumin, a new mobile tour that incorporates AR and 3D animations to help engage and educate its visitors; the app was created through a partnership between the DIA, Google and GuidGo. The Pérez Art Museum Miami (PAMM) built a beta-stage AR app for the exhibition, Felice Grodin: Invasive Species, which includes multimedia explainer videos and an interactive map. Both the DIA and PAMM projects were funded by The Knight Foundation, as part of a $1.87 million fund to help 12 art museums leverage technology to connect people with art.

While the above examples incorporate primarily AR, VR took centre stage at the AGO in December 2016, and then at the Met Cloisters in 2017, when the Canadian Film Centre’s Media Lab (CFC Media Lab), Seneca’s School of Creative Arts and Animation and the AGO screened their groundbreaking collaboration, Small Wonders: The VR Experience.

Visitors to the exhibition, Small Wonders: Gothic Boxwood Miniatures, were able to do much more than observe the 50 miniature boxwood prayer beads, most small enough to hold in the palm of a hand. By donning a VR headset and exploring a 3D rendering of one of these miniatures, viewers could see the tiny bead with a level of detail otherwise unavailable to the human eye. This VR experience also marked a significant first for the AGO – the first integrated use of VR to enhance the exhibition experience.

Extending the Life of An Exhibition

The Museum of Contemporary Art in Los Angeles (MOCA) partnered with Los Angeles-based startup VR’t Ventures to create a VR experience of MOCA’s exhibition, MASTRY, a retrospective honouring Kerry James Marshall’s work on the marginalization of African-Americans in American art. The exhibition, which ran at MOCA from March through July 2017, as well as at the Met Breuer in New York, was both popular and well-reviewed. VR’t Ventures created an immersive VR experience (which required a headset) as well as a more accessible desktop version that enables users to select paintings to learn more. While the physical exhibit was only on display for a year, the virtual version continues on, and can be experienced by more people globally – extending the exhibition’s duration and access considerably.

Transporting People to the Past

From March to June 2017, the Canadian Museum of Nature hosted screenings of the short film, First Life, a VR experience produced by Alchemy VR and narrated by British broadcaster and naturalist, David Attenborough. Its use of Samsung Gear VR technology enabled visitors to enjoy 360-degree interaction with extinct marine creatures that were brought vividly to life. Other museums have hosted similar VR-focussed exhibits that immerse visitors directly in historic events, such as the British Museum’s grim exploration of life in the Bronze Age, a “virtual reality weekend” at the Museum, created in partnership with Samsung in August 2015.

Art collector Gorge Kremer, having spent more than 20 years acquiring the paintings of seventeenth-century Dutch masters, recently collaborated with his engineer son, Joël Kremer, to launch a museum based entirely in virtual reality. The collection was recreated digitally through a process called photogrammetry, which required photographing each piece thousands of times to create high-res 3D images. They hired Johan van Lierop, an architect who’d built brick-and-mortar museums, to imagine a space without the physical limits, building code requirements, real estate scouting and astronomical costs of traditional construction. Holographic guides impart art lessons as users wander past paintings lit by the exact right conditions. Visitors can stick their noses right up to the surface to examine the brushstrokes, which would likely get them booted from a physical museum! Even better: users can visit this museum from anywhere in the world.

As these examples indicate, the uses of AR and VR in galleries, museums and other cultural institutions are rich, varied, dynamic – and continuing to evolve and transform. They have drawn new viewers, enabled greater access and broadened our understanding of what constitutes “art,” leading us to wonder, where will AR and VR in these spaces take us next? And how will we, the viewers and attendees, perhaps start to see art anew? 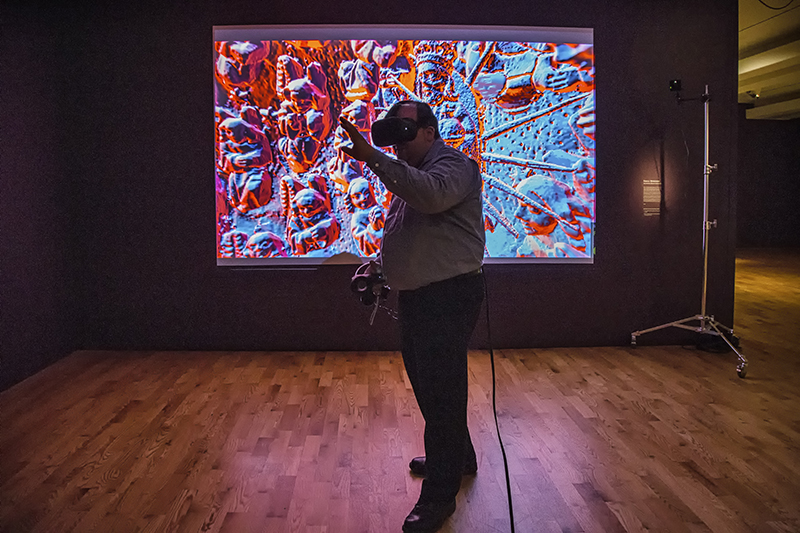