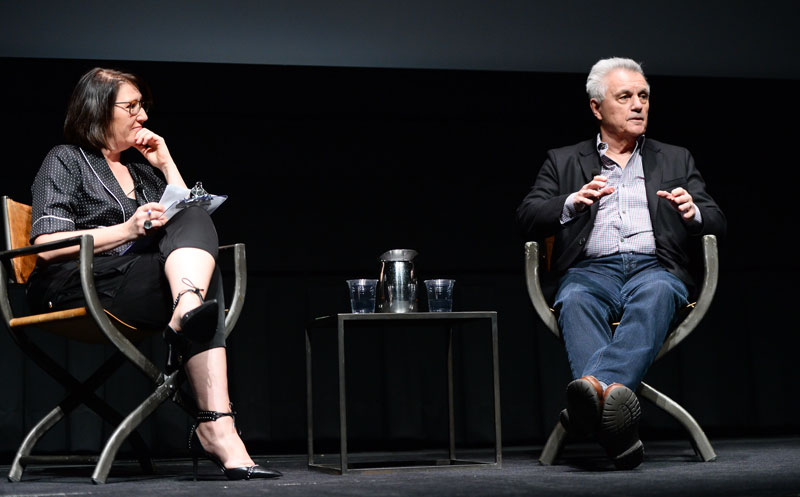 On November 22, the CFC had the privilege of holding a master class with internationally acclaimed writer and Academy Award-winning screenwriter John Irving at TIFF Bell Lightbox in Toronto. Hosted by entertainment journalist Johanna Schneller, the conversation provided an honest and insightful perspective on the process of adapting novels for the screen, adapting screenplays into novels, John’s unique creative process, as well as interesting tips and pieces of advice for filmmakers, writers and screenwriters alike.

A film lover from a young age, John favoured Westerns and European films. He received a “lucky [movie] education” throughout his pre-teen and teenage years by watching European films at the art house cinema close to where he grew up in Exeter, New Hampshire and through the Saturday night films that would play at the Exeter gym. It was these venues that exposed John to the works of iconic filmmakers Ingmar Bergman, Federico Fellini, François Truffaut and others, and ultimately shaped his creative imagination and the way he would view films and filmmaking.

Early into his career, John’s first foray into adaptation was working with Irvin Kershner on the screenplay adaptation of John’s first novel Setting Free the Bears for Columbia Pictures (in the UK). Knowing nothing of adaptation and little of screenplays, John credits Kershner for teaching him everything he knows about writing a screenplay, “Irvin Kershner taught me how to write a screenplay. He was my film school.” Unfortunately, the film was ultimately never made. He did, however, walk away with newfound knowledge from his first adaptation process, although it wouldn’t be until many years later that he recognized all that he had learned.

"Irvin Kershner taught me how to write a screenplay. He was my film school."

John would eventually go on to write several original and adapted screenplays, and to win an Academy Award for Best Adapted Screenplay for his script for The Cider House Rules.

Before he endeavoured to adapt The Cider House Rules into a screenplay, John had been approached to adapt some of his other novels. He declined these opportunities because he didn’t see those novels as movies. John only decided to revisit the idea of adapting his work when, upon completing the final chapter of The Cider House Rules (his sixth novel), he saw the novel as a film. It was all these years later that, thanks to Kershner, John was able to turn one of his novels into a screenplay and ultimately into a movie. Since then, he has been writing screenplays regularly – more original than adapted.

In fact, John has written a number of original screenplays that have never left his desk. He’s come back to them years later after wondering how the storyline of certain characters within them could evolve and began to see some of those scripts as novels. He’s already experienced this twice with two screenplays that he grew into novels – The Avenue of Mysteries, which was a screenplay for 20 years before it became a novel, and the novel he is currently writing called Darkness as a Bride – and wouldn’t be surprised if it happens again. John finds the process of growing a screenplay into a novel to be much more natural and organic than adapting a novel as a feature-length film, “it’s a lot easier to expand something, than it is to cut and throw things away and change the context from what it originally was.”

Throughout his experience writing novels as well as original and adapted screenplays, namely the 13 years he spent adapting The Cider House Rules for the screen – with four different directors – John has unsurprisingly gained a wealth of knowledge and expertise on not only writing and adaptation, but on the entire filmmaking process. Here are some of the biggest takeaways, insights, anecdotes and pieces of advice that John shared with the audience at the master class.

ON THE NARRATIVES HE EXPLORES IN HIS WRITING

John has a penchant to imagine beyond his personal experience in his writing. A lot of the narrative lines and content in John’s stories don’t come from his own experiences or those of individuals he knows, but is rather “the stuff of nightmares – it’s what you hope never happens to you, or to anyone you love. I go there. My imagination always goes to the worst thing that can happen. […] I work from the worst case scenario.”

During a question from the audience, John elaborated on his choice to imagine lives that were not his own because, “I don’t care what the real story is. I care what the best story is.” He believes that it’s the responsibility of a storyteller to be able to imagine beyond the confines and limitations of their own experience.

ON THE IMPORTANCE OF RESEARCH & EDUCATION IN THE WRITING PROCESS

John says that in order to write about experiences outside your own, you have to “go back to school” – and he enjoys this part of the writing process. That means not only doing your research and educating yourself on the topics that you’re writing about, but also talking to the people who have lived those experiences and getting them to read your work. John gave the example of when he took an Ob/Gyn course at Yale School of Medicine in order to better understand what he was writing about in The Cider House Rules, or when he spoke to the wife of a homicide detective in the Red Light District in Amsterdam for A Widow for One Year.

ON HIS CREATIVE PROCESS

When asked what he primarily focuses on when writing a screenplay (i.e. thinking in shots, sequences, etc.), John explained that he concentrates on the pace, which he suggests is easier to manipulate in a screenplay than it is in a novel. In a screenplay, he considers the length of the scene and adjusts the pace accordingly, and also considers the dialogue in relation to the way the scene is shot. John gave an example: “It’s a longer take if you show the face of the actor hearing the dialogue rather than the face of the person who is speaking because you have to hear the dialogue and see someone react to it.”

John also explained that in his creative process, “I pay a lot of attention to the architecture of the story I’m going to write before I commit myself to writing it. One of the reasons I do that is that when I start writing the story, I want to be thinking only about the language. […] I want the story to have already happened in my imagination so that I’m not distracted by architecture.”

"I pay a lot of attention to the architecture of the story I’m going to write before I commit myself to writing it."

ON WHEN A WRITER IS MOST VALUABLE ON SET

“A writer is of use on the set when there is five or six players or more involved in dialogue. Why? Because the pace of the scene should be dictated by how it’s shot (this is the decision between the DP and the director), and sometimes when you’ve got five or six players contributing to the dialogue […] you find yourself with too much dialogue for the scene – you gotta lose something. Or, more commonly, you find yourself, in the case of a slow-paced filmmaker […], with not quite enough dialogue.”

ON THE EDITING ROOM

John elaborated to say that in the editing room is where it helps him to see the overall picture.

John doesn’t consider himself a collaborator by nature. However, he admits, “When it works, it’s really fun.” One of the times it worked well for John was on The Cider House Rules.

He feels The Cider House Rules was a “very fortunate collaboration” – likely, in part, due to the fact that John tries to be as selective as possible about his collaborations. He stressed the importance of finding the right match of creators involved on the project in order to ensure the story is told in the best way. He and Phillip Borsos, the original director attached to the project who tragically fell ill and passed away before being able to direct the film, agreed that Lasse Hallström was the right choice for a director to properly tell the story of The Cider House Rules. “When you’re writing a novel […] the fine tuning is in your hands. When you’re writing a screenplay, nothing is in your hands. You have to hope that the director listens and hope that the DP gets it right, and I feel this was a very fortunate collaboration.”

John is currently at work on his fifteenth novel – a ghost story called Darkness as a Bride and is working closely with Tod Williams, director of The Door in the Floor, adapted from the first part of John’s novel A Widow for One Year, on telling the rest of the story on screen. Additionally, John has written an adaptation of his novel The World According to Garp as a five-part limited series. He and Warner Brothers are currently in the process of finding a production and distribution partner for the miniseries.