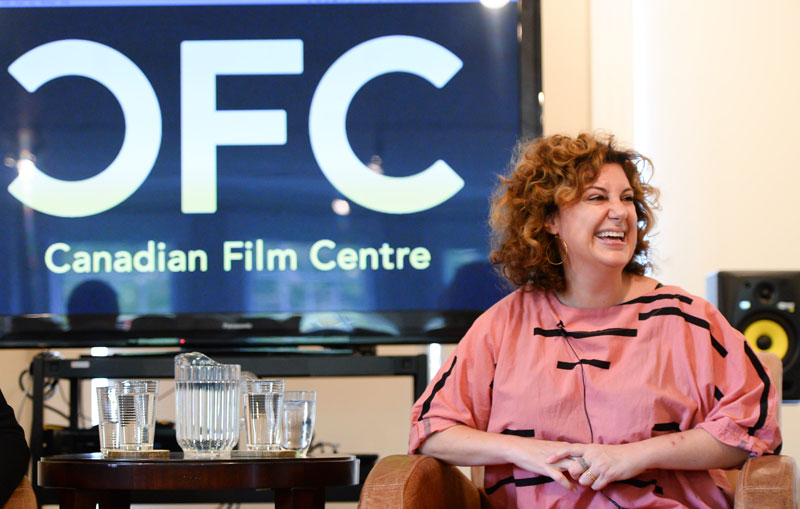 Kirsten "Kiwi" Smith visits the CFC for an In Conversation event

If you were anything like me as a high schooler watching 10 Things I Hate About You, you swooned over sensitive bad boy Patrick Verona (played by Heath Ledger), admired edgy, smart feminist Kat Stratford (played by Julia Stiles), and rewound your VHS multiple times to re-watch the scene of Patrick trying to serenade Kat by singing “Can’t Take My Eyes Off You” and dancing along the high school bleachers.

Crafting those characters and memorable scenes was writer, producer, novelist and poet Kirsten “Kiwi” Smith’s first foray into screenwriting. The script, based on Shakespeare’s The Taming of the Shrew, launched Kiwi, and her writing partner Karen McCullah Lutz, into Hollywood.

Since their debut with 10 Things I Hate About You in 1999 (which still holds up nearly 20 years later), Kiwi and Karen have penned some of the biggest and most popular female-centric comedies of the 2000s: Legally Blonde, She’s The Man, Ella Enchanted, The Ugly Truth and The House Bunny. They made audiences fall in love with the characters in the scripts they wrote and helped launch the careers of many of the actors who brought those characters to life.

Kiwi visited the CFC this week as a guest of our Cineplex Enertainment Film Program to participate in an intimate In Conversation on comedy writing, hosted by Telefilm Canada Feature Comedy Exchange writer alumna Mika Rekai. The In Conversation was an insightful crash course and master class on screenwriting, Kiwi’s creative and writing process and the nature of comedy.

Like any good Elle Woods-inspired student, we took some notes on Kiwi’s many insights into screenwriting.

Here are 10 things we learned from Kirsten Smith:

Writing with a partner

Working with a partner can be really beneficial, especially when it comes to brainstorming and building an outline for a screenplay, because you have someone to talk things through with.

Screenwriting is a fine balance

It’s important to fight for what you believe in and to remember why you want to tell the story in the first place, but it’s also important to remain open to processing and hearing ideas and notes – especially if the same points have come up a few times, or if they’re coming from someone you really respect.

Act 1 is critical to any screenplay

Kiwi recommends creating indelible moments in the beginning to define your characters, but also keeping Act 1 short and sweet.

Comedy set pieces don't need to be filled with “hijinks”

They just need to create memorable moments for your leads (and thus, your audience!).

Kiwi encourages screenwriters to aim to write three scripts a year, or one pilot and two scripts, or two pilots and a feature, etc. She suggests it should take about four months to write a script – so try to set realistic goals for yourself as a screenwriter.

How to deal with writer’s block

When you encounter a block, just force yourself to write a scene – even if you think it’s terrible. Eventually, as you’re writing, pride will take over, you’ll go back and adjust the scene, and it will turn out to be better than you think.

It is its own art form and a big part of the screenwriting process.

How to write a partner for a strong, smart female protagonist

Write a character that is based on …

Don’t be afraid to be silly and playful

It pays to be “free” during your brainstorming and creative process.

Kiwi is a brilliant screenwriter

And a hilarious person who loves movies about women becoming the best versions of themselves.

What’s next for Kiwi, you ask? She is currently combing through 600 Sweet Valley High books as she works on adapting them into a movie for Paramount (adding that to our “must-see” list!), and continuing to “write female-driven movies until the day [she] kick[s] it.”