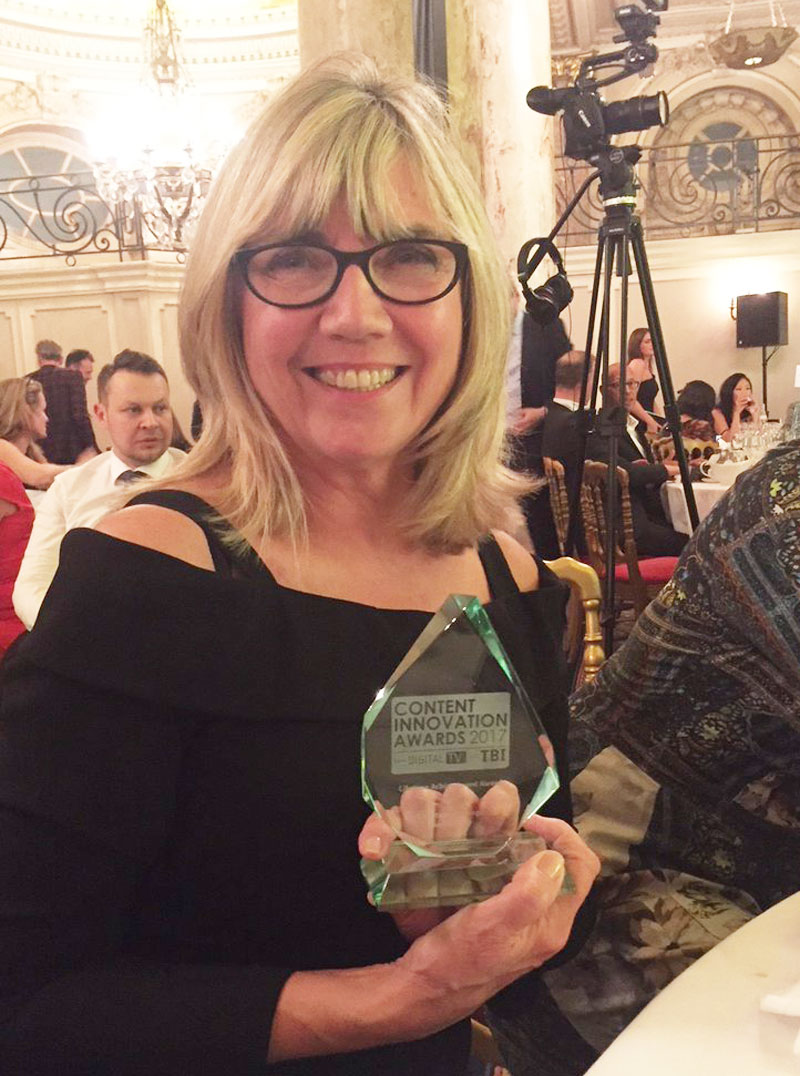 CFC extends huge congratulations to renowned producer and our Board Chair Christina Jennings, Chairman and Chief Executive Officer, Shaftesbury, who was bestowed with the Lifetime Achievement Award at the 2017 Content Innovation Awards yesterday evening as part of the international entertainment content market MIPCOM, in Cannes, France.

“Christina is a remarkable and visionary creator, entrepreneur and prolific contributor to the global screen-entertainment industry,” shared CFC’s CEO Slawko Klymkiw. “From her award-winning work at Shaftesbury, to her groundbreaking content with Smokebomb, Christina is undoubtedly a very deserving recipient of this award.”

Bill Brioux, longtime journalist and one of Canada’s leading voices on Canadian media, shared on his blog that Christina received the award “for staying out front in the increasingly disruptive world of television for 30 years.”

Jennings, an alumna of the CFC, is one of the media industry’s most accomplished producers. She founded Shaftesbury in 1987, a content company known for innovative storytelling and building successful brands. Spanning the production of TV, feature film and digital content, Shaftesbury titles are sold in 120 countries worldwide and include acclaimed international hits Murdoch Mysteries, Carmilla, ReGenesis, and Life with Derek. As world-class brand builders, Shaftesbury is an industry leader in engaging and sustaining audiences by creating brand extensions including original content created for digital and social media platforms, mobile apps, and VR experiences.

With a view to evolving media consumption habits and the impact of technology on traditional media, Jennings acquired groundbreaking digital studio Smokebomb Entertainment in 2008, which produces convergent experiences for television and original projects, including branded entertainment. Smokebomb was named Playback’s Digital Producer of the Year in 2015.

In June 2014, Shaftesbury and Smokebomb launched shift2, an innovative agency that helps brands harness the power of video content on YouTube and explore their millennial voice using scripted series and social media to drive measurable results. The company’s KindaTV, home to U by Kotex®-funded drama series Carmilla and other Shaftesbury web series, is the largest scripted YouTube channel for millennials in Canada, reaching nearly 100 million views since its launch in 2014.

This award is the latest in a long list of awards and acknowledgements that Jennings has received. Named to Maclean’s Power List of Canada’s 50 Most Powerful People, Jennings’ recent awards and honours include Playback’s Producer of the Decade, the Academy of Canadian Cinema & Television’s prestigious Academy Achievement Award, the PROFIT Award for Excellence in Entrepreneurship at RBC’s Canadian Woman Entrepreneur Awards, and the Innovative Producer Award at the Banff World Television Festival.