National Museum of Modern and Contemporary Art (MMCA), Seoul — built on a historic site rife with interrogations on subversion, a political assassination and coup d’état — is nowadays THE place to see cutting-edge contemporary art in the city, and the perfect fit for CFC Media Lab’s VR exhibition, The History of Visual Magic in Technology Pt.1: Canadian VR Films. Along with an exhibition of three VR shorts, CFC also hosted a lecture led by Ana Serrano, with creators Jay Lee Williams and Galen Scorer. 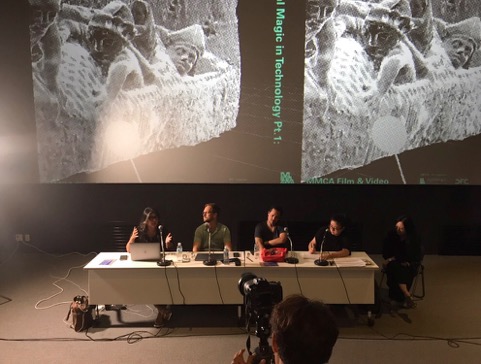 The panel leading the lecture at the MMCA on August 12, 2017

Ana Serrano opened the lecture, entitled Creating the New “Cinematic Imagery” in VR, by talking about VR as ‘embodied medium.’ In virtual reality, she explained, the users feel, experience and become whatever the creator wants them to become, whereas film allows space for the viewers to weave in their own thoughts and feelings.

Serrano went on to say that VR takes you into a new dimension. However virtual it may be, it brings presence. But presence does not equal truth in this case. For example, there is a VR program that allows you to feel like what it means to be a tree, but it is a false reality – total presence, but not truth.

VR brings you into a space that would otherwise be inaccessible. Offering variation in scale, whether miniature or grand, is something that VR conveys very well. All of the VR pieces in the exhibition explore, in one way or another, the elements of embodiment, scale and new dimensions. Small Wonders: The VR Experience is an artistic and technical collaboration between AGO Conservator Lisa Ellis and interactive artist and designer Priam Givord. A gothic prayer bead from 1500s Europe was recreated through micro-CT and virtual reality, giving the users intimate access to the intricate carvings of its exterior shell, containing the mythology within. On the top tier representing heaven, they can see the figure of Jesus Christ, seated in the centre of a group. Followed by purgatory below and hell at the bottom, containing carvings of people in deep suffering and one person being tortured inside the giant mouth of Satan.

This prayer bead was and is a reminder to many believers of the importance of being a “good Christian” and what straying away from the path of righteousness could entail. The journey and insight into a proposed parallel world was/is made possible through this bead.

Small Wonders: The VR Experience brings the magic of penetrating and moving in incredibly close to this small, ancient religious relic; the backbone to a belief of almost a third of the world’s population. The prayer bead journeys the user from a microscopic physically created reality, to the imaginary and faith-led macroscopic reality of heaven.

This VR piece by Ellis and Givord takes the users into both the micro and macro dimensions, which previously could never have been accessed. In addition, there is the added freedom of physical movement within both spheres.

The lecture also explored how VR is a cinema that allows each individual the autonomy to move within the mise-en-scène. Jaques Tati explored this idea in Mon Oncle (1958) and this idea is also evident in Mike Figgis’s Timecode (2000). But as we explored in Small Wonders: The VR Experience, VR enables it to be a literal movement.

Within the virtual world that the users move within, digital integrity is of supreme importance – with the highest possible resolution – so that it looks and feels like a physical environment, even though it is virtual.

As Small Wonders exemplifies, in VR the users create meaning, not just through cognitive choices, but also with their bodies. Control agency is an important factor, as they have the choice to replay a scene and explore it over and over again, from different angles and perspectives. Almost becoming editors of the film and experience itself.

VR can also be experienced as “social cinema,” as it can be more like a game than a film. Unlike traditional cinema, which only provides a viewing space, VR can offer a creation space. It is cinema as real life, and some platforms allow multiple people within one room to create and explore together; this is the future of VR. A combination of cinema, installation art, interactive documentary and game fused into one experience. 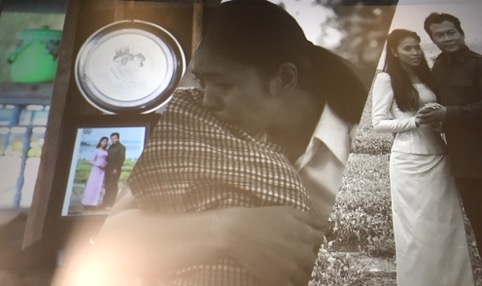 ‘Invisible World: The VR Experience.’ Up to three multiple frames within one frame.

Invisible World: The VR Experience, directed by Galen Scorer and Tyler Enfield, is a good example of the interactive element of “social cinema.” It was made in Cambodia and set during the 1990s civil war. There are three main characters: 1) a young North American English teacher enjoying a life of cheap drugs and a carefree lifestyle, 2) a local doctor who lost his wife and child a few years prior, and 3) the central character – a mother whose child is drowning in a river.

This VR piece allows the users to make choices using their head and body movements. One method of viewing provides the user with the ability to view two or three multiple frames simultaneously in one frame (similar to Timecode [2000]). Another method enables users to change their perspective by moving into a set up of three videos stacked on top of each other, so that they can physically journey through them. The third method allows users to view two separate screens on the left and right. Users can choose between all three methods at any time during the film.

This film can be experienced repeatedly, and each time will be different. Users can see multiple perspectives of the same story. Their choices and method of viewing alters their experience each time. During the final chapter, the users can gain deeper insights into individual characters by selecting which one they want to delve into. The character’s voice that narrates the story is what remains the only constant throughout the experience.

Invisible World: The VR Experience is a deep dive into the psychology, emotions and histories of individuals, with a tragic incident bringing people together. Moving from this type of emotive human storytelling and into a more abstract realm is where ‘reality’ can become slightly disjointed.

An experiment in form

Lastly, the lecture explored the final production in The History of Visual Magic in Technology Pt.1: Canadian VR Films – the hallucinatory-esque experience of Body/Mind/Change Redux, based on Videodrome (1983), starring David Cronenberg and directed by J. Lee Williams and Blair Renaud.

Videodrome was released at a time when home entertainment on demand was becoming increasingly popular through VCRs and VHS tapes. It questioned where we were going as a civilization, with the influx of TV and VHS technology. How what we see and experience on the screen could become biologically interwoven with our neural network and flesh, with the line between the screen and ourselves diminishing. This is currently a very popular topic of discussion regarding VR and AR these days, so Videodrome, one of the first films to start the discussion (created by an iconic Canadian filmmaker nonetheless) was the quintessential choice for this piece.

Williams was on the panel at the lecture and spoke of how Body/Mind/Change Redux was the first time that someone was exhibiting VR as art. This project initially came about as a transmedia project and then got into TIFF.

The History of Visual Magic in Technology Pt.1 at the MMCA provided a revealing look into the various types of Canadian VR, spanning from 1500s religious iconography and realism to 1980s commentary on modern technology. “We are moving into a new dimension, into a new space," concluded Kim Eunhee, Curator MMCA Film and Video, "our relationship to image and space is changing.” 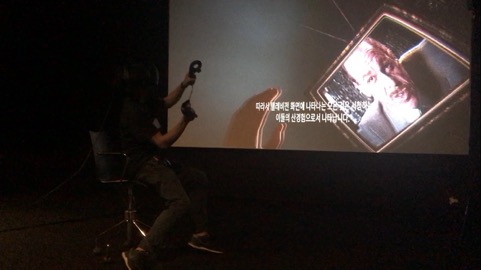 A user experiencing ‘Body/Mind/Change Redux’ at the MMCA.

Nilesh Kumar is a producer at STEAK, a concept+film+audio production house based in Seoul and Hamburg that strives to create a deeper appreciation of what we see, hear and experience.