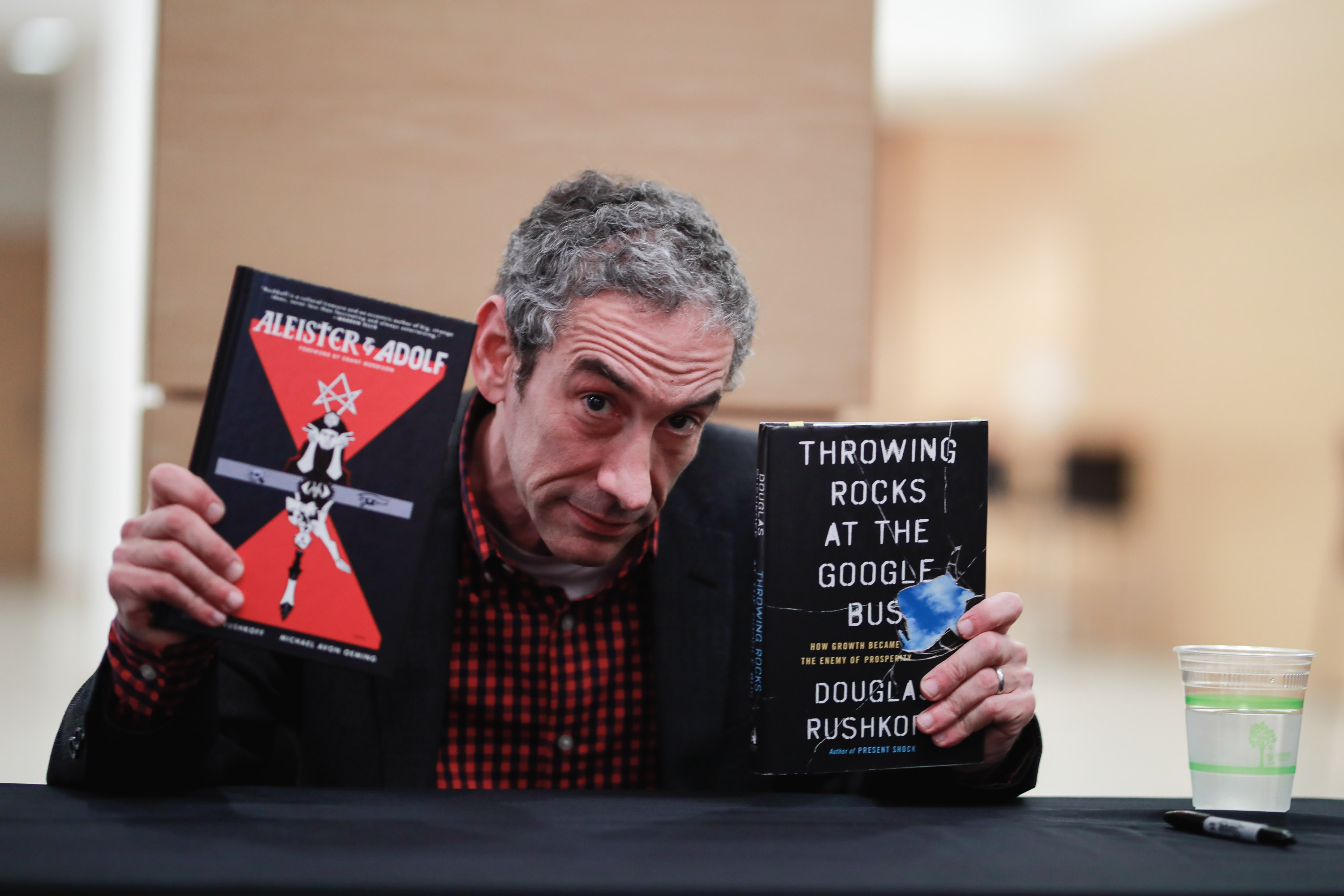 As one of the most celebrated public intellectuals in North America, Douglas Rushkoff is no stranger to new ideas. That remains true in Throwing Rocks at the Google Bus, a new book in which Rushkoff dismantles the conventional wisdom of the growth economy. Instead of making our lives easier, he argues that digital technology is being used to extract profit from individuals and communities, and that there is nothing to prevent us from reasserting control if we recognize that the growth mandate is itself a manufactured relic from the past.

Those ideas were at the forefront of Rushkoff’s Critical Crossroads discussion at the Toronto Reference Library on Monday evening, co-presented by the CFC Media Lab. Over the course of an hour, he explained that the constant demand for growth has stripped away our humanity. What’s more, he did not rely solely on his words to make his point. 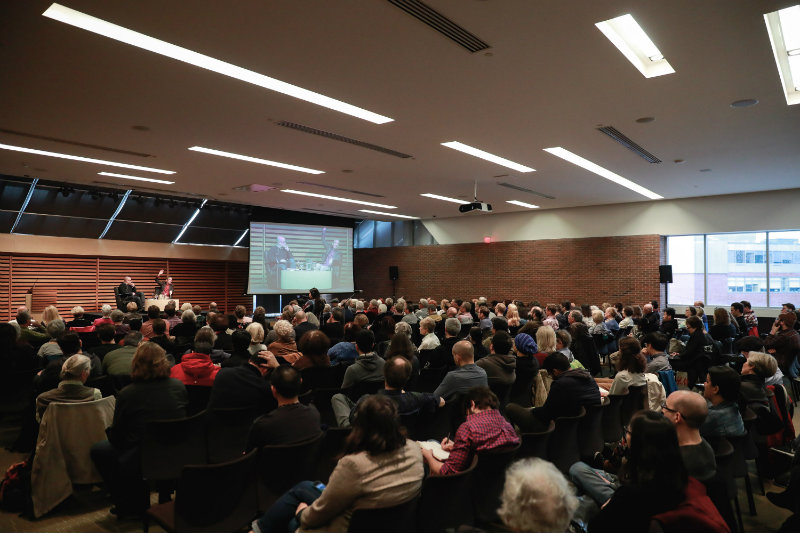 Though Rushkoff was the star of the evening, attendees were also invited to experience Distributed: A Beginning, an animated Virtual Reality short film based on Throwing Rocks at the Google Bus. Commissioned and produced by the CFC Media Lab, narrated by Rushkoff, and directed by Justin Stephenson, Distributed is the first film of its kind, an abstract visualization of the core themes of the book.

“The book makes the digital media environment visceral,” says Rushkoff, when asked about Distributed prior to the event. “An abstract VR treatment can take historical language, economic language and make it feel almost psychedelic. These are not ideas that you listen to. They’re ideas that you experience.” 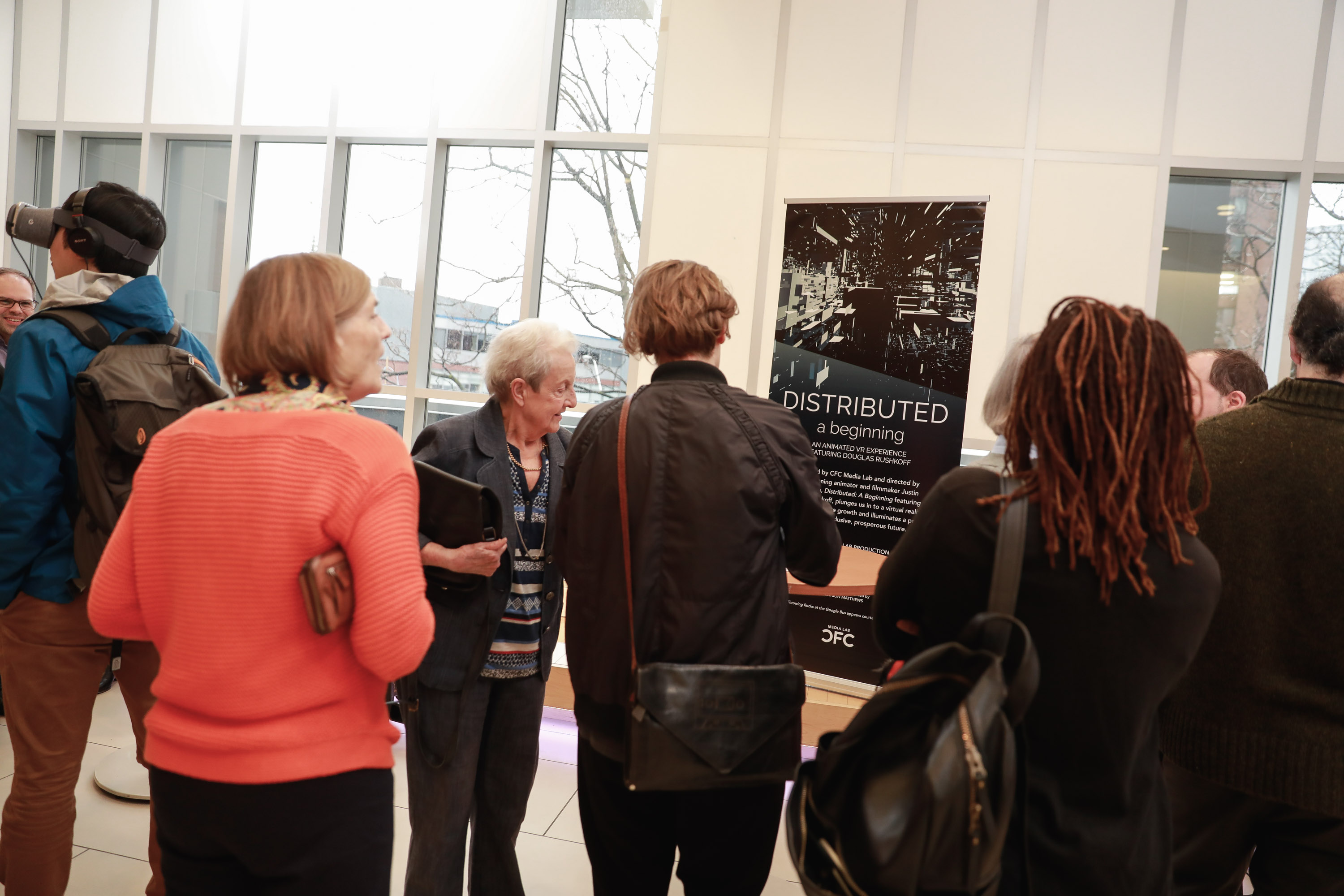 Stephenson used data from actual elevation maps to accomplish that goal. Distributed depicts the landmarks of the modern financial empire, tracing Wall Street and the Google campus with thin lines of code. The buildings dissolve and then reform as you move through the experience, which takes viewers beneath the surface of the economy and uses those same lines of code to build a post-capitalist future from the ground up. Despite their seeming permanence, the film implies that these landmarks are artificial and we shouldn't be afraid to question and restructure the very foundations of our reality.

“The object of the book is to show that the economy is synthetic,” says Rushkoff. “It’s not a condition of nature. It’s a set of rules. Once you understand that, then all of this stuff is plastic and open for discussion.”

“These are the most powerful buildings in the world but these spaces are essentially fabricated,” adds Stephenson. “They can be taken apart and put back together and reconfigured.” 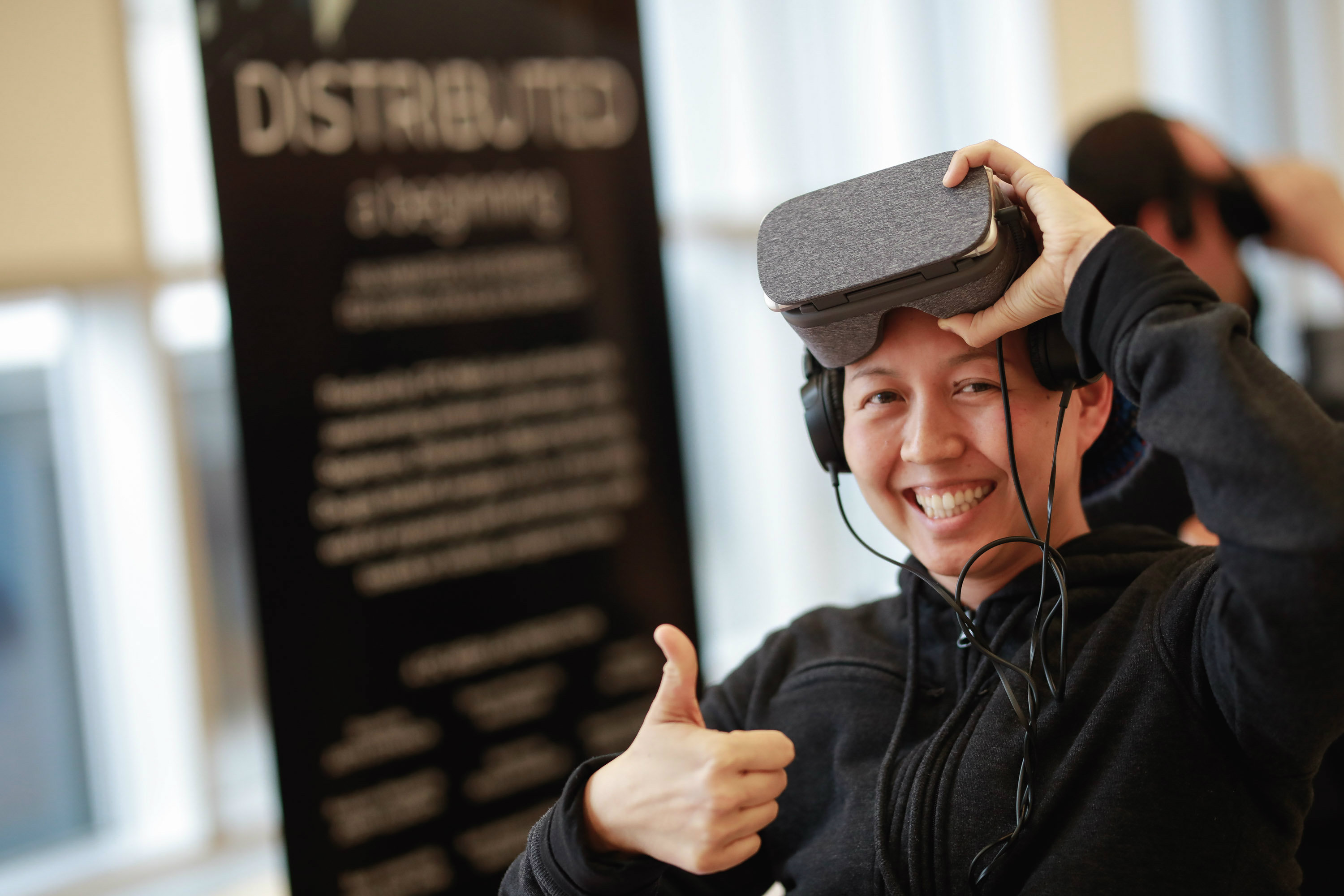 For the CFC Medial Lab, Monday’s event is an attempt to put those lessons into practice. Rushkoff’s talk and the short film, Distributed, are part of a broader grass-roots project conceived by the CFC Media Lab in collaboration with the Toronto Public Library System. Monday’s event which combines the lecture with a VR experience is the beginning of a series of evocations for a “distributist future” they urge us to collectively create.

“Our partnership with the Toronto Public Library is organic and bottom up in nature,“ says Ana Serrano, Chief Digital Officer of the CFC. “Our goal is to arm local communities with the tools they need to create more open, inclusive and distributist economic models, from starting local currencies, to creating land trusts, to developing platform cooperatives, to templates for creating community gardens and so on.”

Natalie Kertes, Senior Producer of Cultural & Special Event Programming at Toronto Reference Library, agrees. “We believe our role is as much to create knowledge as it is to safeguard it. We’re excited by this new collaboration with the CFC Media Lab as we experiment with new ways to engage the community on the question and creation of our collective ‘distributist futures.’"

Monday’s event will hopefully be the first of many such evenings. Activities associated with this project include knowledge exchange events like the Critical Crossroads lecture with Rushkoff, but also evocative experiences that enable audiences to viscerally access these complex ideas -- experiences that VR and other immersive technologies can provide and of which the CFC Media Lab is uniquely positioned to produce with its community of startups and creative talent.

Their ultimate goal is to transform the extensive network for this project into the kind of hub that Rushkoff describes in his book, a public space where people can share ideas and build sustainable post-capitalist communities.

“As long as we’re thinking that we have to change things at scale, the people who actually operate at scale are going to win, and that’s corporations and governments,” he says. “As long as we realize that it’s happening on a human to human level, that’s when we win. Libraries can do something at scale that remains local.”

Distributed is, therefore, an experiment to see whether or not VR and immersive technologies can be effective tools for those kinds of grassroots movements. 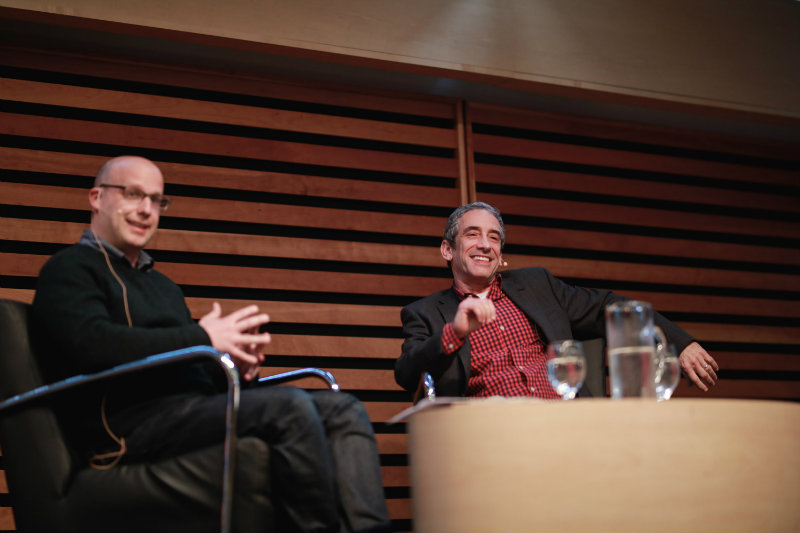 “Can it become more analog? Can it become more fluid?” Asks Rushkoff, arguing that VR should be used to explore new paradigms and new ways of looking at the world. “You think that Pong was meant as a simulation of table tennis? No. It was its own thing.”

In that regard, it helps that VR is such a young medium. Stephenson was able to explore Rushkoff’s esoteric concepts because there are no formal rules about what a VR film like Distributed is supposed to look like.

“The environment challenges people’s sense of solidity and that’s useful in an argument where we’re trying to say that the foundations are much more plastic than we give them credit for,” concludes Rushkoff. “People [need] to feel that the dashboard of economic creation is entirely accessible to them.”

If you are interested in furthering the discussion about new ways to engage on the question and creation of our collective ‘distributist futures' get in touch.