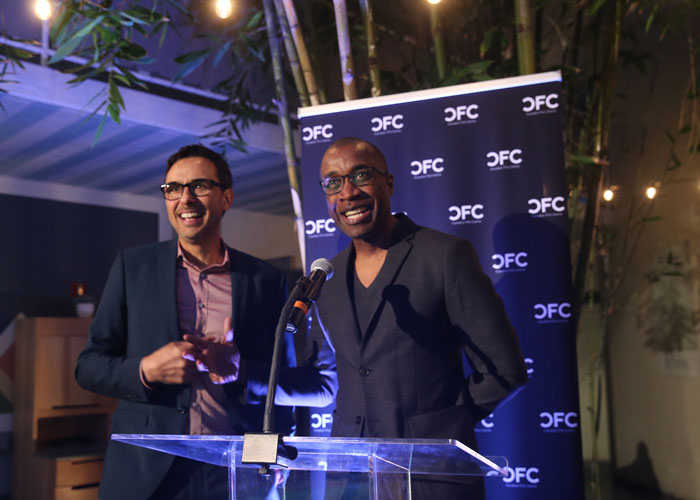 One of the CFC’s greatest strengths is the collaboration it helps forge between alumni, and Clement and Damon have been a dream team since they first met at the CFC back in 1991. They began working together on their CFC short film SAVE MY LOST NIGGA’ SOUL and formed production company Conquering Lion Pictures while making their first feature at the CFC, RUDE, which went on to premiere to critical acclaim at Cannes.

Through the years, D’Oliveira and Virgo have engaged both national and international audiences with their commitment to representing untold, yet universal stories. And this was most evident last night, as an overwhelming number of friends and colleagues from both sides of the border came out to honour Conquering Lion Pictures’ most impressive and important creative achievements.

The evening began with a warm welcome from Christina Jennings, CFC Board Chairman and Shaftesbury CEO, who thanked all in attendance, including James Villeneuve, Consul General of Canada, Los Angeles. Following a few words from Villeneuve, CFC CEO Slawko Klymkiw, and Fresh TV President Tom McGillis, CFC founder Norman Jewison and Academy Award winner Louis Gossett Jr. took to the podium to present D’Oliveira and Virgo with the evening’s honour. 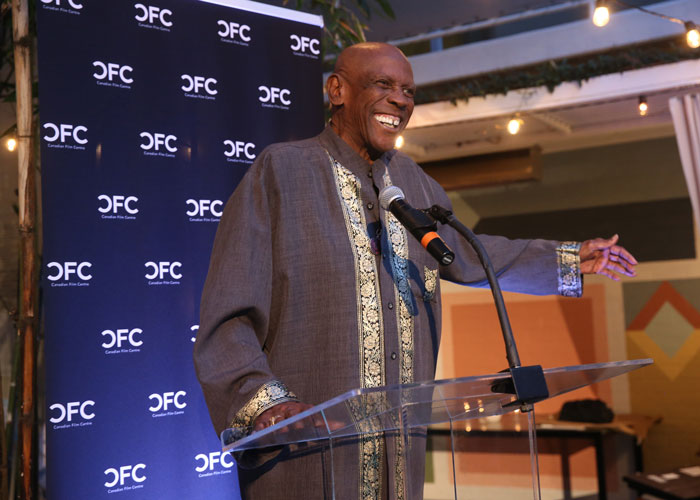 Gossett Jr. spoke first, sharing some personal stories from his time working with them—whom he called “two favourite people in this business”—on The Book of Negroes. “I’m extremely flattered to be asked to speak about these two young men,” he explained.

“It’s called lightning in a bottle. I’ve had a career that’s like that—like lightning in a bottle—where it’s not supposed to be possible for me to get an Oscar, to be doing something in theatre, to be living in Toronto … to get that acceptance. So here, I am, very grateful to be participating in another Roots, which is what [The Book of Negroes] was. They wanted me to play a part called … Daddy Moses. Before they got the Moses out, I said yes. BET, Africa and Canada … that’s five aces in a deck.”

He continued, “As you learn on Broadway, every time you get in front of the people, you must raise the bar. They worked me to death, but really, they were insisting that I raise the bar. That’s the status these two young men have set … and they’re only going to continue to go up and up. I cannot wait to work with them again.”

Esteemed filmmaker Jewison further addressed the importance of D’Oliveira and Virgo’s work, noting how proud he has been to watch them grow as professionals, as storytellers, and as … tenants.

“I’m not only a fan of these two talented filmmakers, but I’m also their landlord,” Jewison explained to the crowd with a smile.

“Clement and [fellow CFC alumnus] Bruce McDonald came years ago and now we’ve got all three of them on the fourth floor of my building in Toronto. I’m on the fifth floor, so I go down to the fourth floor every once and a while, and when we were working on projects, we’d see each other every day. I’d go out and hang out because I liked the way we shared our sensibilities about our hopes and dreams and our stories that we want to tell. I have much respect for them because what they have accomplished is remarkable. They bring so much credit and honour to the Canadian Film Centre as graduates, but they’ve also brought great honour to our country because their films have been shown in Berlin, Cannes, all over the world. These two filmmakers represent, I think, the best of what is coming out of the CFC in Toronto.”

He added, turning to D’Oliveira and Virgo, “I really hope that you stay in the building. I’m not going to raise the rent.”

And with that, D’Oliveira and Virgo were welcomed to accept the 2017 CFC Award for Creative Excellence. Both filmmakers received original artwork by Toronto graphic artist Riad and CFC Writer’s Lab alumna Motion. The artwork is a visual representation of their work, a collage of imagery that illustrates how the influences of culture, roots and stories connect. 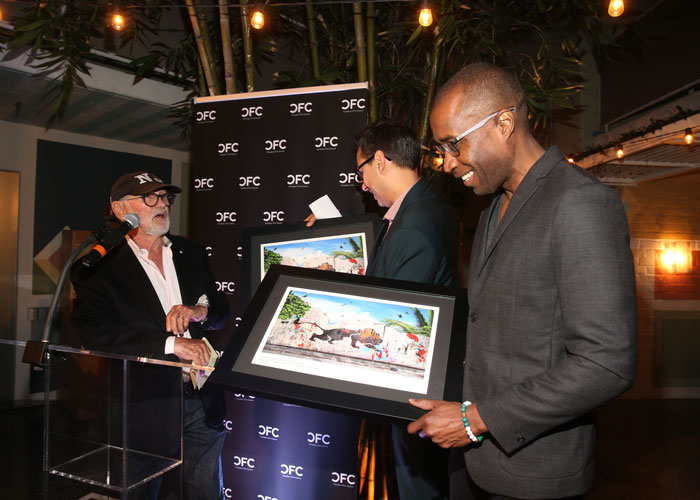 After accepting their award, D’Oliveira and Virgo took a moment to reflect on the honour, their early years at the CFC and how they want to continue to give back to the community that helped make their dreams a reality.

“Needless to say, we could not have achieved what we have in and out of Canada without their support,” D’Oliveira began. “We were dying to tell stories from a different perspective, and for the CFC’s first Diversity Summit Lab, [CFC Chief Programs Officer] Kathryn Emslie assembled a group of belligerent upstarts who all wanted to break into what already seemed to be an impenetrable industry. The first short dramatic project that Clement and I made tried to change that … a film branded with a title that seems no less charged today than it did in 1993: SAVE MY LOST NIGGA' SOUL. We were given wings to create something provocative, something out of the box. And that came with the support of the entire institution behind us.

A couple of years later, the CFC stepped in and provided financing for our first feature film, RUDE, the first black-written, directed and produced feature film in Canada. Inspired by the end result, RUDE’s message of breaking barriers became our own personal mantra and we started a production company dedicated to that. Twenty years later, we continue to develop projects that give voice to a whole new generation of authors, filmmakers, artists, some of whom are still eclipsed by the unfavourable odds.”

Virgo echoed these sentiments, thanking the CFC for “truly being [their] champions over the last 20 years.”

“When we made RUDE, we had a first cut that wasn’t very good. I remember thinking, ‘What are we going to do? Let’s show it to Norman!’ We brought him and showed him the cut and he said, ‘This is what you’ve got to do.’ We did those things and the film ended up going to Cannes a few weeks later … Even now as a filmmaker, whenever I come across a scene that I’m unsure of what to do with, I think, ‘What would Norman do?’” 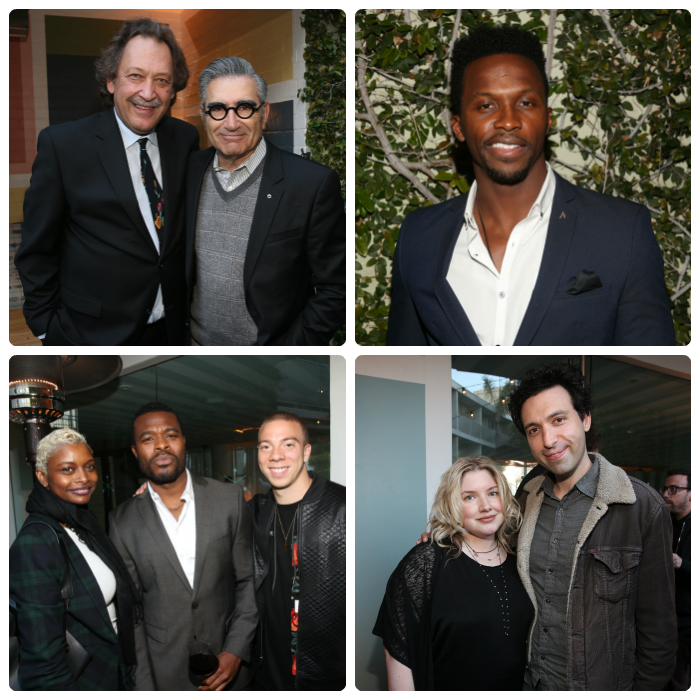 In addition, we welcomed this year’s four Telefilm Feature Comedy Exchange teams, who have been pitching their projects and taking meetings in L.A. throughout the week, along with the current Slaight Music residents. CFC Media Lab is also here with the five investment-ready startups taking part in the IDEABOOST Global Market Exchange.

Finally, we thank this year’s event co-hosts, Cast & Crew Entertainment Services and Fresh TV, for their continued support. We are delighted to be working with these companies who share our commitment to building a strong entertainment business of the future.

For more photos of CFC’s 2017 reception in L.A., CLICK HERE. All photos by Jesse Grant.