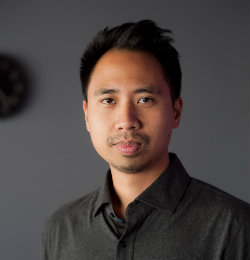 Virtual reality (VR) as a way to consume content is a relatively new phenomenon. Of course, gamers have long enjoyed the thrills of experiencing new worlds in 3D 360-degrees.

The bar has risen more slowly in the world of publishing. Yet with a VR headset, readers can instantly step into a story itself, whether it is a TV show, documentary film or music video – a complete, immersive experience to engage viewers. No wonder media giants are focusing their efforts on this technology.

Enter Ryan Andal, Co-founder of Secret Location, a pioneering VR and technology studio that launched VUSR in late 2016. VUSR is a content management platform that allows creators to publish and monetize content easily without the constraints of tailoring it to only one type of VR headset. This is a game changer that enables publishers to revolutionize the storytelling experience.

Ryan Andal shares his inspiration for VUSR, his first virtual reality experience and the toughest lesson he learned as an entrepreneur.

What does VUSR stand for?

Ryan Andal: VUSR is simply a mash up of the terms "viewer" and "user." When it comes to the experiential narrative work we do, it's always been difficult to differentiate whether the audience is a "viewer" or a "user." We thought it would be fitting for a tool that helps content creators reach their audience to be named in such a way. We also condensed the word as a subtle tip-of-the-hat to "VR."

What inspired you to create VUSR?

Andal: As is often the case with product development stories, VUSR was an answer to a problem we were frequently encountering. As the VR industry grew, we were producing more VR, and faced the same issue that premium publishers like The New York Times were, which helped us ask the question: how do we effectively distribute our content? Getting VR content distributed across the more than seven platforms available to consumers was a challenge. It’s VHS versus Betamax on steroids. We didn’t set out to build a product; we ended up with a great product that solved a problem. We’re now pleasantly surprised to be in a market that is receptive to what VUSR offers and what it will deliver as the industry grows. We now are able to continually improve and evolve the product in a way that is inspired by our own needs and those of our customers who are using it.

You have an impressive list of clients and partners, including the CBC, Google and The New York Times. It seems VR content is becoming more and more mainstream — do you think it will eventually become the new norm?

Andal: It’s hard to believe that VR will supplant any other media; we still have radio after the mainstream adoption of television. I think VR will find a place alongside TV and video games as a powerful narrative and interactive medium, but [like video games] it might take time for the technology to become a household item.

Can you think of other ways that VR technology may revolutionize other industries?

Andal: Absolutely! VR has so many applications beyond just entertainment, and VUSR may actually accelerate its adoption. One of VR technology’s primary assets is the ability to transpose the user to an altogether different environment. It’s easy to see applications in real estate, tourism, architecture, city planning and space exploration. Simulation is another of its strengths that could radically impact training and education, medicine and prototyping. All this, and we’ve only just scratched the surface of what VR is capable of.

What prompted you to join CFC Media Lab's IDEABOOST Network?

Andal: I’ve always had immense respect for Ana Serrano and the CFC. Quite frankly, being an entrepreneur in Canada with the benefits of funding and tax credits, I’ve been largely sheltered from the realities of building an investor network, pitching for VC funding, and taking a product to international markets. The benefit of joining the CFC Media Lab is having the exposure to other entrepreneurs in my situation, as well as a wealth of industry knowledge and contacts to help elevate some of these areas that I am constantly trying to improve within myself and within the company.

What's the toughest lesson you learned as an entrepreneur?

Andal: The biggest lesson I’ve learned as an entrepreneur is how important it is to understand every single aspect of your business. If you’re not in control of your finances, if you don’t have a pulse on your staff, if you don’t understand the day-to-day tools and technology, or what it takes to close a job, then you are leaving yourself open to a huge point of failure for your business.

Do you remember your first virtual reality experience?

Andal: My first modern VR experience was the Tuscany VR Demo by Sixsense. A colleague had just received his Kickstarter-backed Oculus Rift (DK1) [headset] and many of us in the office were chomping at the bit to try it out.

Can you tell us one person in technology who you admire and why?

Andal: I know it may be cliché, but Elon Musk has always been a personal hero of mine. His willingness to dig in and problem solve is what every entrepreneur should strive to do. I’m also in awe of how future-facing the vision for his portfolio of companies is. He’s not only looking to improve our day-to-day lives, but is also extremely eco-conscious and mindful of the benefits his technology will have on our children’s future.

Can you tell us a favourite film, TV show or web story you've seen in VR that you would highly recommend?

Andal: I have to admit, I fall behind quickly on my references, and I'm also careful of what I consume and how it will influence my own work. At the risk of dodging the question, I will say I am a huge fan of content pieces that take me to places I couldn't otherwise go. I don't just mean to the tops of mountains, but mystical, fantastical, even spiritual places where I can experience something I couldn't otherwise do with my own humanity. These are the experiences that I personally seek out, and thankfully there are more of them being created every day. I’d be remiss if I didn’t mention HalcyonVR, the hybrid broadcast/web/VR short-form series that Secret Location released late last year. I feel we took some big risks and faced some difficult challenges, but in the end, we achieved our goal of proving that there’s a model for immersive, interactive storytelling.

IDEABOOST Accelerator is a four-month bootcamp for tech companies that want to achieve success and scale in the media and entertainment ecosystem.An initiative of the Canadian Film Centre’s Media Lab, in partnership with Corus Entertainment, IDEABOOST provides high–potential Canadian startups with seed investment, mentorship, and access to its network.