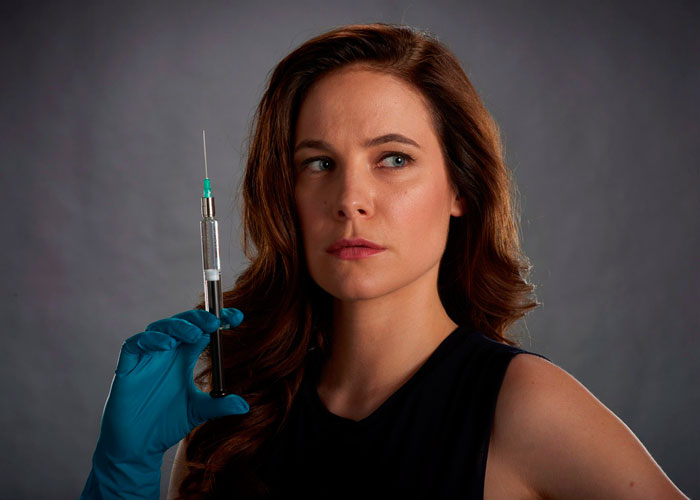 In 2014, aspiring writer Tara Armstrong entered the Canadian Film Centre’s (CFC) Bell Media Prime Time TV Program with a strong pilot script about a young doctor who helps her terminally ill patients die “on their own terms” through assisted suicide. During the program, Armstrong created a teaser for said pilot, and within a year, had a six-episode series order from Global Television. This week, Mary Kills People – the series based on that script starring Canadian actress Caroline Dhavernas (Hannibal) and featuring a number of CFC alumni in major roles – hits small screens across Canada.

“The concept is the same,” Armstrong explains from the set of Mary Kills People just outside of Toronto. “It’s evolved in that … between the writers and Tassie’s showrunning, we’ve built an actual series.”

The Tassie she speaks of is Tassie Cameron, showrunner of former Global/ABC hit series Rookie Blue and alumna of the CFC’s Cineplex Entertainment Film Program Writers’ Lab. Cameron was so excited by Armstrong’s concept and teaser that she and sister Amy Cameron (another CFC Writers’ Lab alumna) decided Mary Kills People was the “perfect first project” for Cameron Pictures Inc., their burgeoning independent production company. Both she and Amy are executive producers on the series.

“I’m always looking for projects with complicated female protagonists and this was that,” Tassie Cameron explains. “We’re dealing with this incredibly intense subject matter that’s moving and emotional and hard, and at the same time, it’s got a tone of humour and excitement.”

While Armstrong wrote the pilot on her own, she and Cameron worked alongside Prime Time TV Program alumnae Marsha Greene and Sherry White, and CFC Writers’ Lab alumnus Michael Goldbach in the Mary Kills People writers’ room. They also brought on Holly Dale – an alumna of the Directors’ Lab and director of CFC Features’ film Blood & Donuts – to direct all six episodes. Rounding out the Mary band of CFC alumni? Editor Roslyn Kalloo, writer/actor Joel Thomas Hynes and Global production executive Susan Alexander.

Cameron did not necessarily intend to bring together so many former CFC residents, including a notable number of women, in making this series. These were simply the talented people that she, Armstrong and the rest of the Mary Kills People team felt were the right fit for it.

“I really think it was an organic state of affairs. Tara’s project came to me. I was working with Amy. We hired Holly because she gave such a passionate pitch for the material … and Marsha [Greene] just because she is amazing.”

Greene, much like Armstrong, was still fairly new to the industry when Mary Kills People was greenlit. As she tells it, had she not gone through the Prime Time TV Program in 2013, she might not have had the confidence to connect with Cameron at a conference and inquire about mentorship. (The two would go on to work together on Global’s Private Eyes, where they would both meet Armstrong.)

“The CFC does change your life in a very particular and special way,” Greene says. “They do their best to introduce you to everybody. After that, you have to put yourself out there and meet people."

Although she has a long list of credits now, Cameron says that she “wasn’t a writer” and was “afraid to call [herself] one” until she went through the CFC. “It was formative for me. It has been for so many people I know.”

The Prime Time TV Program was certainly a springboard for Armstrong and Mary Kills People. She wrote the pilot following an inspiring creative non-fiction assignment at the University of British Columbia, and then took it to L.A., where she had “doors slammed in [her] face.” After “probably a year” of rejections, she would receive the news that she and her script were headed to the CFC.

“If you’re lucky enough to get into the CFC, it’s a great way to break in,” Armstrong says. “It’s like they vet the writers in the country and it elevates you [on] to everybody’s radar. They take us around town and you literally meet everybody in the industry. I think that’s what finally starts to open doors.”

During the 2014/15 Prime Time TV Program, Armstrong and eight other writers worked alongside Executive Producer in Residence Brad Wright to develop the series Travelers. While she does have a credit on that show, which premiered in late 2016 on Showcase (Canada) and Netflix (elsewhere), unfortunately she could not join the writers’ room full-time. The reason? She was already working on Mary Kills People for Global.

Although as Cameron says, Mary Kills People’s journey from script to screen may sound like a Canadian TV “Cinderella story,” it’s much more than that.

“Having a script as well conceived as Tara’s script does not come easy. I know from talking to her, and from experience myself, that to get that script to a place where people are going to say yes, it takes an enormous amount of work and energy and practice.”

Armstrong adds, “I wrote a lot of scripts that never saw the light of day before I wrote Mary Kills People. We just need to learn how to become writers and put in those hours, and then it all sort of happens. You find the agent, you find the people.”

Mary Kills People premieres Wednesday, January 25 at 9 p.m. ET/PT on Global in Canada. It will premiere in the U.S. on Lifetime.

“[The CFC] takes you around town and you meet, literally, everyone in the industry. That’s what finally starts to open doors — people knowing you.”