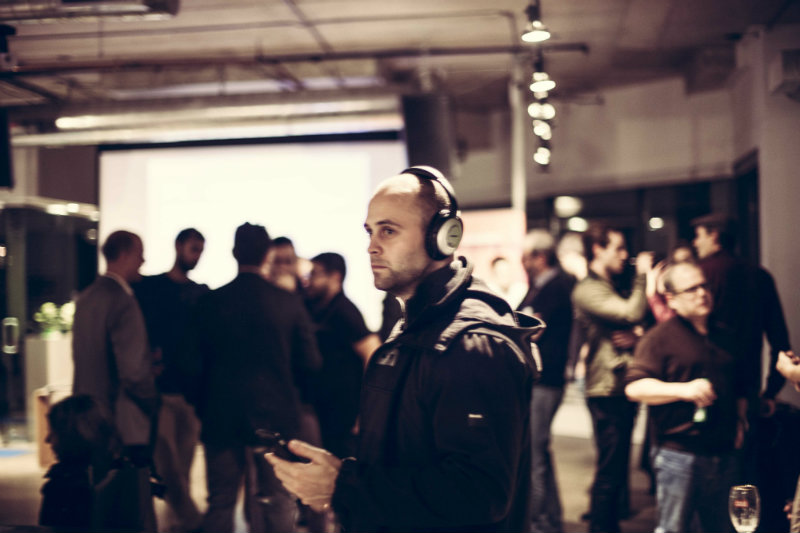 So many Canadians are plugged into their smart phones and laptops at all times that everyday communication can sometimes feel laboured when the earphones are on. Enter Synervoz's exciting new technology that makes spontaneous communicating with one another effortless. It’s hard to imagine how this product did not exist sooner.

The TurnMeUp app, the first product of Synervoz Communications, offers the ability to chat with friends, family and colleagues, even if you’ve got your earbuds in and the volume cranked up. You could be listening to music at work or watching a video at home, the app’s Voice over Internet Protocol (VoIP) and audio technology automatically turn down the volume of what’s playing, so that you can have an audible conversation.

While TurnMeUp is a consumer-focused app, the underlying intuitive technology of hands-free, voice-activated controls can be used for many purposes. We spoke to the founder Jim Rand, a member of CFC Media Lab’s IDEABOOST program, about his inspiration for the idea, start-up obstacles and what he’s learned along the way.

How did you come up with the idea for your product?

Jim Rand: The idea evolved over time. I listened to a lot of music while traveling, and I often wondered what friends and family the world over were up to. I thought how cool it would be if we could connect instantly through our headphones, without the barriers of traditional communication.

There were several other seeds, but the real catalyst was specific; I often run and go to the gym with friends. Most of us prefer to wear headphones, but it’s annoying to pull out a headphone every time you want to talk. When I was studying for my MBA in Spain, I decided to see whether anyone had built the solution — an always-on VoIP service that would automatically adjust the music volume when someone spoke. It wasn’t out there, and I figured it needed to be built. From there the dots started to connect.

How do you see the technology benefiting individual consumers and businesses?

Jim Rand: It depends on the use case, but TurnMeUp is in a position to transform the way we consume media by allowing us to do it together in ways that were never possible before. We’re letting you stay connected, through voice, the entire time you’re listening to music or watching videos, no matter where you are. You can blast music as loud as you want and still converse over it because of our voice detection and automatic volume control (imagine a silent disco scenario). You can watch movies with friends abroad, each of you from the comfort of your own living room, as if you were in the same room. You can work in a remote team and feel like you’re in the same office. Smart phones and headphones have driven people into isolation, but we’re bringing them back together. That has benefits for consumers and businesses alike.

Jim Rand: Building a complicated product on a shoestring. Today it’s hard to raise capital before you have customers, regardless of how much you’ve de-risked other aspects of your business. For reasons particular to our product, it was always going to take longer to build a minimum viable product than would be the case for many software start-ups. So we’ve had to climb particularly high to get over this obstacle — but the flip side is that copycats will have to get over this obstacle themselves.

What’s one surprising thing you learned while building your business?

Jim Rand: Original ideas are few and far between. I’ve heard many reasons for the 90 per cent failure rate of start-up businesses, but I’m convinced that a big part of it stems from the fact that there are too many people doing the same thing. I feel that competitive risk is vastly underestimated, and too much emphasis has been placed on early growth metrics. Start-up valuations, often derived from these growth metrics, never cease to amaze me, especially in the aggregate. But maybe it’s different this time.

How do you try and tune-out the worry of competitors and copycats?

Do you have any other projects coming up?

Jim Rand: I have a few ideas, but I’ll probably open-source them, because our roadmap already stretches years into the abyss.

What’s one piece of advice you’d give your younger self before venturing into a start-up?

Jim Rand: Save your cash, you’ll need it.