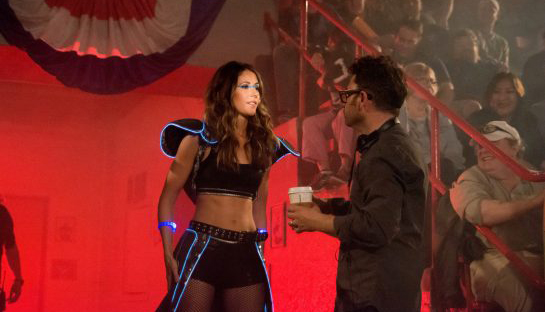 Amanda Crew and Robert Cuffley on the set of 'Chokeslam'.

On Sunday, October 2, the Calgary International Film Festival (CIFF) is going to get slammed!

That evening the festival closes with the world premiere of Chokeslam, which participated in the 2014/15 Telefilm Canada Feature Comedy Exchange. And if all goes as co-writer and director Robert Cuffley hopes it will, the film – which follows an aimless young man (Chris Marquette) as he reconnects with a high school crush (Sheena, played by Amanda Crew), now the “Lindsay Lohan of the wrestling world” – should leave the CIFF crowd in stitches (you know, the funny kind).

We spoke with Cuffley earlier this week and got some insight into what goes into making a feature comedy in Canada, and how the Telefilm Canada Feature Comedy Exchange helped bring his project from the sidelines on to the main stage. Read the interview below (edited and condensed for length).

Where did the concept for the film come from and why did you want to tell this story?

Robert Cuffley (RC): Well, first of all, I should say I’m the co-writer. The other writer is Jason Long. We were sitting in a coffee shop and we started talking about nostalgia. Both of us are very drawn to John Hughes. You know, Breakfast Club, Ferris Bueller, Some Kind of Wonderful? So, I came in one day with my high school yearbook and was just looking at these photos that are from a very pivotal moment in your life. And you start looking at these photos and some [people] are your friends, some you’ve never met and some you know most through reputation. You go through and start saying, ‘Okay, so this guy got divorced. She had a miscarriage. He died.’ It just starts to get really eerie and strange. This was the entry point for us, the nostalgia factor and ‘What ever happened to … ?’

From there, we came up with a character who was stuck in a sort-of polaroid of the past where he hasn’t changed at all and the entire world has gone on without him. We wanted to do a comedy, but I wanted it to have the humour of say, Bottle Rocket, one of my favourite Wes Anderson films, which has no nudging and winking to the audience and everything is deadpan. So, we decided his long-lost love had to be a female wrestler … since that had happened to both of us. Just kidding. [Laughs]

But we just started thinking about Sheena and how she should be a full head taller than him. He’s just a mild-mannered guy who works at a deli and she’s a loud, brash wrestler. We always called her the Lindsay Lohan of the wrestling world. We wanted to get the relationship going, but also have something that holds him back that happened when he was 17 or 18 and kept him in the past.

You’ve done a couple of feature dramas previously and now you’re switching genres. Has doing this project made you excited to explore more comedy, or perhaps even straddle the line between drama and comedy?

RC: I have done very, very different things and I sometimes wonder if that hurts me. But I guess the instantaneous value that you get from a comedy [is nice]. Like you don’t have to wait for the ‘I was thinking about your movie I saw the other night….’ It’s more instantaneous. You get to judge the reaction in the moment. That’s really satisfying.

I’m probably more excited about next Sunday than I was with my earlier films because, unlike with previous films, I absolutely know it’s going to go over really well.

Chokeslam participated in the Telefilm Canada Feature Comedy Exchange. What lessons did you learn through the Exchange and how did they help bring Chokeslam to life?

RC: We were down in L.A. [for the Feature Comedy Exchange] and we had all these meetings and [when they were scheduling them] they were kind enough to really look into where we were at, as opposed to a one-size-fits-all kind of thing. They catered specifically to what we needed.

Charles Wessler was one guy who was very helpful. He produced a lot of comedies with the Farrelly Brothers, and just gave brutal feedback and made us question whether we still wanted to be filmmakers or not. [Laughs] He was just great. And how could you not take the guy’s advice, right? He’s done There’s Something About Mary, Dumb & Dumber …

Charles was helpful before and after [making the film]. He actually saw a cut and gave us feedback. I remember when we first met, we were scheduled for 45 minutes and we stayed for, I think, almost three and a half hours. And it was completely out of his generosity.

I’ve done many meetings in Hollywood and showing up with someone that they’re familiar with, like the CFC, definitely helps a lot. It gives you some credibility. You don’t just look like some guy pitching a movie that will never get made.

What advice would you give an independent Canadian filmmaker who is looking to break into features, particularly feature comedy?

RC: I would think about what makes your humour unique. And I would watch humour from all over the world, not just American comedy. Because that just tells another story.

Also, instead of waiting to get funding, ask yourself, ‘Can I do anything in the meantime? Can I go workshop with some actors? Can I go and shoot a scene?’ … Don’t make the mistake that I made, which is to just apply for funding and sit around and wait.

RC: I’m doing another comedy with another Jason – I like to work with Jasons! [Laughs] But this Jason has also been through the Comedy Exchange. It’s Jason Filiatrault.

Chokeslam premieres at the Calgary International Film Festival on Sunday, October 2 at 7 p.m. To learn more about the screening and the film, CLICK HERE.

Want to apply for the Telefilm Feature Comedy Exchange? Applications are open now through October 17, 2016. To learn more, CLICK HERE.