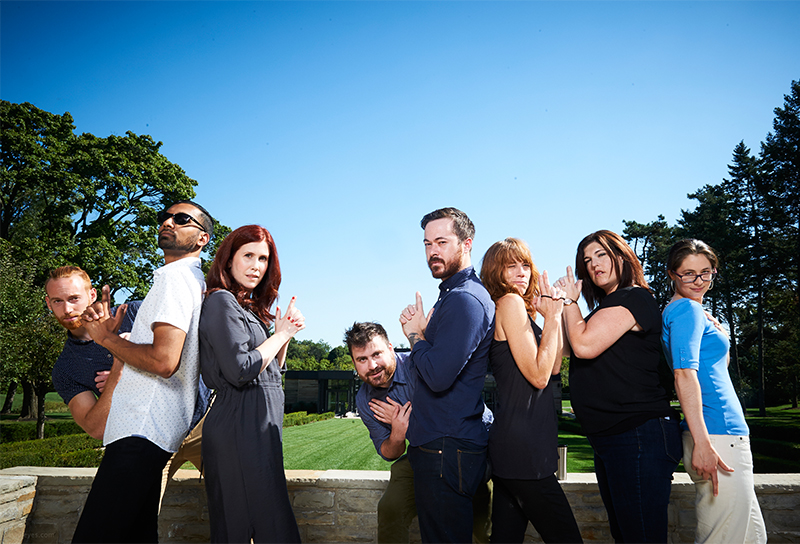 When Tatiana Maslany won the 2016 Emmy for Outstanding Lead Actress in a Drama Series, she thanked Orphan Black creators Graeme Manson and John Fawcett and the series’ “incredible writers’ room” for creating a compelling hit series that “puts women at the centre.” On October 17, 2016, the much buzzed-about sci-fi series, Travelers, will debut on Showcase in Canada and Netflix internationally. Its recent world premiere at Toronto’s Fan Expo 2016 drew fan raves that indicate a new cult hit on the horizon.

What do Orphan Black and Travelers have in common? Both were incubated in the Bell Media Prime Time TV Program at the CFC. The Program, presented in association with ABC Signature Studios, delivers a real world story room experience for six to eight TV writers a year. Participants spend three months working on an original series intended for the marketplace under the mentorship of an experienced creator/showrunner. Then they spend two more months developing their own original series concept through a series of workshops, story sessions and business and marketplace meetings with key industry leaders.

This week, CFC is excited to welcome seven new writers to the 2016 Program, with award-winning creator, writer and producer Karen Walton at the helm. When stellar talents like these join forces, another great hit is bound to emerge. Read more about our TV residents and stay tuned!

BRYCE GAMACHE has written and directed over eight short films, including the short film, Running By. Many of his films have played at festivals such as the Montreal World Film Festival and Air Canada En Route Film Festival. Gamache holds a BFA in Film Production from the University of Regina, and attended the prestigious York St. John University for screenwriting in York, England. His writing draws inspiration from his upbringing in northern Manitoba, in the community of The Pas and surrounding area. Gamache spends his winters working in the film industry, and summers leading a crew of forest fire fighters through the wilderness of Manitoba.

LAURA GOOD has over a decade of scripted television experience, ranging from production on series like Friday Night Lights and Eureka,to post production on Falling Skies. In Vancouver, she managed Omnifilm Entertainment’s scripted development slate, working with some of Canada’s best showrunners to develop drama series for Bell Media, Corus and CBC in Canada, and for US networks and studios like BBCA, Syfy, UCP, Sony Pictures Television and A&E Studios. Good has written and produced several award-winning short films, including her first short, While I Breathe,which won the international Eastman Kodak Silver Award. Her latest project as executive producer, Rebel, was nominated for a Canadian Screen Award, won the Grand Jury Prize at the Seattle International Film Festival, and was selected for the 2015 TIFF Top Ten. Good holds a BFA in Film Production from the University of British Columbia and a BSc in Aviation from Tarleton State University.

MATT HOUGHTON graduated from an individually structured Honours Program at Concordia University in 2013, and then returned to his hometown of Toronto to focus on writing. He has written original digital series for Maker Studios, Disney Interactive, Machinima Inc. and 20th Century Fox's Digital Studio. Until 2015, Houghton managed 20th Century Fox's Digital Studio's talent incubator, and aided in the development of original sponsored web series for brands like Taco Bell, MySpace, Kia Motors and DirecTV. His work aims to capture life's awkward yet touching (and sometimes awkward-touching) moments, including Adultescents, his latest original half-hour comedy pilot, which is currently under option with marblemedia.

EMILY HURSON is a stage, screen and voice actor, as well as a playwright, screenwriter and producer. A graduate of the University of Toronto Theatre Program, she was born and raised in Toronto and has been acting since the age of 12. For the Toronto Fringe Festival Hurson co-produced, wrote and performed the plays, NowHere and Sleepy Jean (co-author), each of which was named "Best of Fringe." She also co-wrote, co-produced and performed in the short film, Sleep Buddy. Six years ago, Hurson took her first improv class, opening a new dimension of storytelling and triggering her to focus her writing for television. She recently created the half-hour series, 33 Threeways, currently under option with Project 10.

KAREN NIELSEN is an award-winning writer and director from Vancouver, BC. Her most recent short film, Grace, received the Special Grand Jury Prize at the Canadian International Film Festival, and also appeared as a special feature on the Blu-Ray DVD release of Season 10 of the X-Files.Nielsen has worked as a script coordinator on various series, including the series return of the X-Files, the BBC series, Intruders, and the Direct TV series, Rogue. Nielsen is currently developing her original comedy series, Old Biddies, inspired by her grandmothers, as well as the dramedy Bennet U and the drama, Parker’s Fall. Nielsen’s spec script for the TV Drama, Motive, was a top-five finalist in the Final Draft Big Break Screenplay competition.

HAYDEN SIMPSON has worked in Canadian television as a writer and producer. As a producer at MTV Canada, he contributed to several celebrated shows, including 1Girl5Gays, MTV Movie Night and the Gemini Award winning MTV LIVE. Simpson takes his humour seriously, and has written and produced short-form comedic content for established brands like MuchMusic, M3, E! and The Comedy Network, where he was a writer and segment producer for the Late O’Clock News. Most recently he put his enthusiasm for genre to work in Canada, writing for the supernatural medical drama, Saving Hope.

JUSTIN RAWANA, originally from Thunder Bay, Ontario, participated in the 2013 Bell Media Diverse Screenwriters Program – an experience that founded his affection for the kinds of outsider characters and absurd situations that define his comedy scripts. His Brooklyn Nine-Nine script, “The Budget,” finished in the top 15 per cent at the Austin Film Festival’s annual spec competition, and his horror-comedy, Violet,was a finalist in Screencraft’s annual short-script contest. Rawana also worked as a staff writer on season one of the IPF-funded and currently-streaming webseries, Dhaliwal ’15. He holds degrees in English and Education from Lakehead University, and attended the Vancouver Film School in 2013. When not writing, Rawana can be found indulging habits he picked up while working as a teacher in the UK: drinking tea, watching the BBC or standing patiently in a queue.