Gearing Up for ​Enterprising Culture 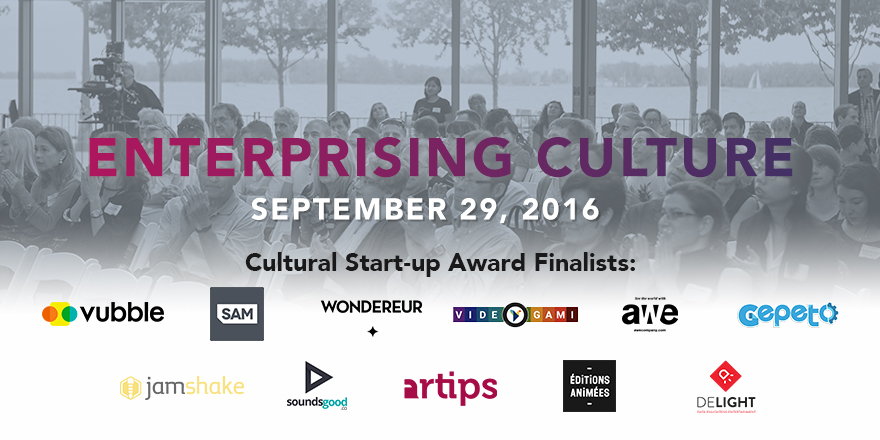 “Global markets have always been important for Canadian cultural start-ups,” says Ana Serrano, Chief Digital Officer, CFC. “Working with the Cultural Service of the Embassy of France in Canada and with Forum d’Avignon have been instrumental in opening up France as a gateway to commercialization in Europe, which is an important market for many of the cultural start-ups we support." Read the full press release here.

The Honorable Eleanor McMahon, Minister of Tourism, Culture and Sport, and Augustin Favereau, Head of Culture and Media Department at the French Ministry of Foreign Affairs, will address the Forum. Aron Levitz, Head of Wattpad Studios, and Steven Hearn, Chief Executive of Scintillio Group among other speakers, will deliver. Check out the complete list of speakers here.

Enterprising Culture will also showcase the Cultural Start-up Award competition. Six French and six Canadian start-ups will each compete in two separate competitions. One French and one Canadian company each will receive the award and an all-inclusive business trip (travel and accommodation up to $10,000) for one week of intensive immersion and commercialization activities. CFC Media Lab’s IDEABOOST will host the winning French company, while Forum d’Avignon will host the winning Canadian company in France.

Enterprising Culture is a major international forum for Franco-Canadian creative and cultural industry start-ups. The forum will be hosted by the Canadian Film Centre’s Media Lab (CFC Media Lab) and the Cultural Service of the Embassy of France in Canada, in partnership with Forum d’Avignon, on September 28 and 29, 2016 in Toronto. With the support of founding partner BNP Paribas, Enterprising Culture will feature debates, networking and keynote speakers. It will culminate in a pitch session for 12 finalists – six from Canada, six from France – with one winning company from each country to be selected by an onsite jury for the first-ever Cultural Start-up Award. Read more at the Enterprising Culture website: http://cfccreates.com/programs/94-enterprising-culture

By invitation only, seating is limited and tickets are non-transferable. For all Inquiries please contact info@ideaboost.ca