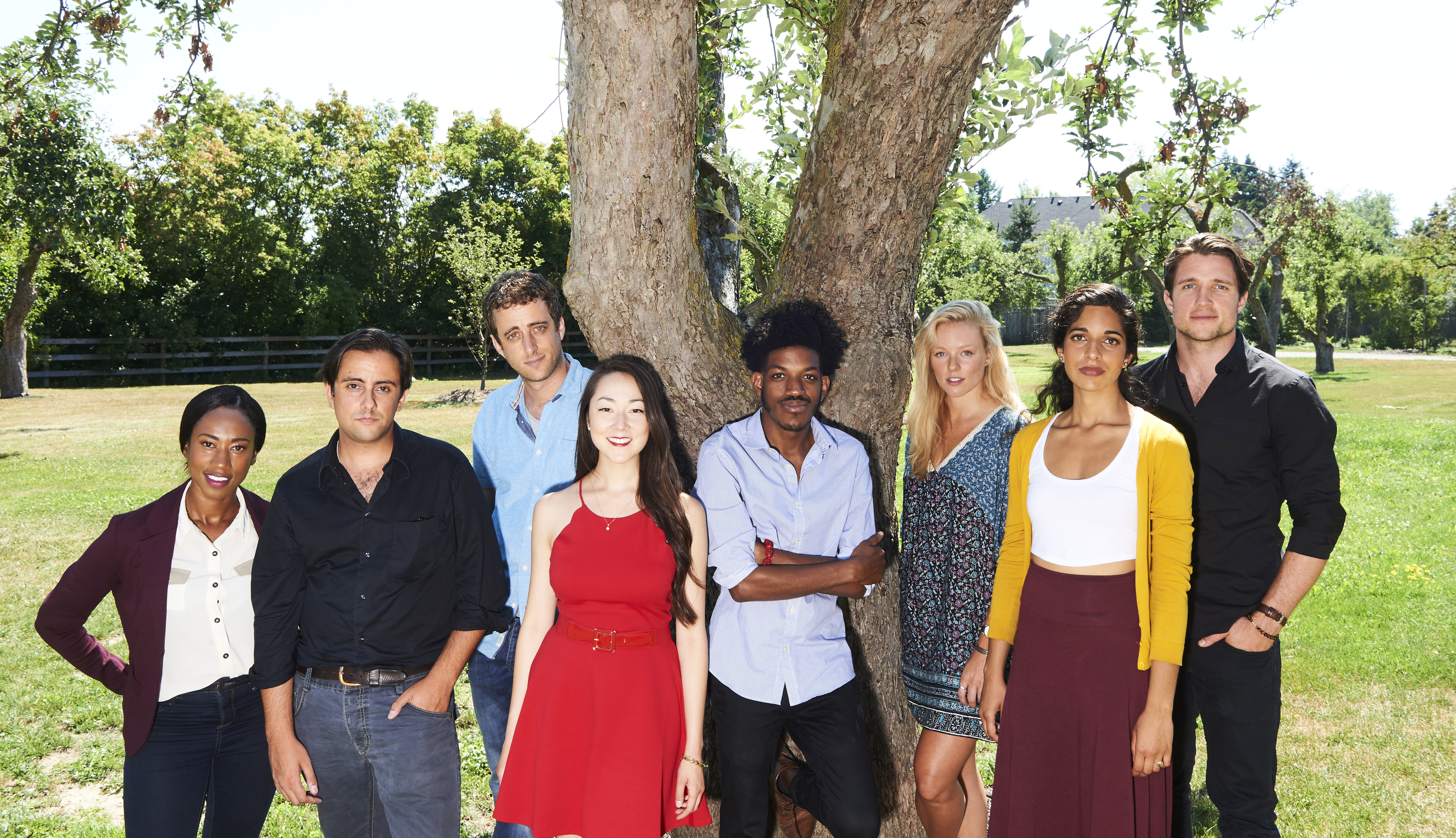 The best actors do not let the wheels show.
- Henry Fonda

Henry Fonda would know: it takes a lot of hard work to make something as complex as acting look effortless. This week, we’re delighted to share that eight new actors have arrived for the start of our CBC Actors Conservatory.

Since 2009, the CBC Actors Conservatory has invited a select group of diverse, talented actors to join us on the grounds of the CFC. They will spend the next six months perfecting their craft, enhancing their audition skills, expanding their portfolios, establishing creative partnerships and accelerating their careers – all to ensure they don’t let the wheels show.

In-depth professional development, cross-disciplinary collaborations and stellar mentorship are hallmarks of the CBC Actors Conservatory, as evidenced by its many successful alumni: Annie Murphy on Schitt’s Creek, Patrick Kwok-Choon in Shoot the Messenger, Matt Murray in Eyewitness, TIFF 2016 Rising Star Grace Glowicki in Her Friend Adam, Sabryn Rock in The Girlfriend Experience and Giacomo Gianniotti on Grey’s Anatomy... just to name a few. Visit our alumni directory and program page to learn more.

Read on to learn more about this year’s residents!

DAN ABRAMOVICI
Dan Abramovici’s television credits include Beauty and The Beast, Max and  Shred, Murdoch Mysteries and Man Seeking Woman. After writing, producing and starring in a series of short films that played the international festival circuit, he graduated to feature films with Ben’s at Home. The movie picked up numerous awards, including Best Feature at the Canadian Film Fest, Best Feature at the Rhode Island International Film Festival, Audience Choice Award at the Gasparilla International Film Festival, and Abramovici received Best Actor nods at the IndieFest Film Awards and Rincon International Film Festival for his portrayal of Ben. Ben’s at Home has since been picked up for distribution with PNP, had a successful theatrical run in Canada and is now available on VOD. Abramovici is currently in development on his next feature project, ...You Have Feet in Your Shoes, which was recently selected as a top 10 finalist in the Cinequest Screenplay Competition. He enjoys challah with Nutella and making mix tapes like it’s 1992.

HARVEEN SANDHU
Harveen Sandhu is a Toronto-based actress from Ottawa, best known for her work at the Shaw Festival, one of Canada's most prestigious repertory theatre companies. In 2015, Sandhu took on the iconic role of Eliza Doolittle in Pygmalion on the Festival Mainstage, directed by Peter Hinton. Other Shaw Festival theatre credits include Sylvia in The Philanderer and Chloë Coverly in Arcadia (both the original Shaw Festival production and the Mirvish remount). She also played Mercy Lewis in Soulpepper's acclaimed production of The Crucible. Sandhu is currently starring in her first sci-fi webseries, Halcyon, set to release online in July. She was named one of the city's "Top 5 Breakout Talents" of 2015 in Toronto Life Magazine, and holds a BFA in Acting from Ryerson Theatre School, having graduated in 2012.

KELLY VAN DER BURG
Kelly Van der Burg was raised on a dairy farm in the small town of Apple Hill, Ontario. Her upcoming television credits include Kenny Ortega’s The Rocky Horror Picture Show, Cardinal, Murdoch Mysteries and The Kennedys After Camelot alongside Matthew Perry and Katie Holmes. Her most recent film work was in the award-winning indie feature, The Game Warden. Van der Burg holds a BA in Theatre from Bishop’s University.

MATTHEW GOUVEIA
Matthew Gouveia was recently nominated for a Dora, Outstanding Male Performance, for his work as Chris Smith in The Coal Mine Theatre’s production of Tracy Letts’ Killer Joe. Past stage acting highlights include Edmond at Storefront Theatre, Richard Sanger’s Dive at Array Space, Bout at Toronto Fringe and Judith Thompson's Who Killed Snow White? at Nightwood Theatre. In 2012, Gouveia travelled to Mozambique with Shakespeare Link Canada, where he worked on a bilingual adaptation of The Winter’s Tale in collaboration with Montes Namuli, a dance company based in Quelimane – a project aimed at raising HIV/AIDS awareness. He is also a three-time consecutive Toronto Monologue SLAM champion. Gouveia is a graduate of the Humber Theatre Performance Program, where he was the recipient of the Dean’s Award and the Board of Governor’s Award. He recently booked his first television role on American Gods.

RYAN BRUCE
Ryan Bruce is a Leo-nominated actor from Saskatoon, Saskatchewan. He trained at the Theatre Department of the University of Saskatchewan, and graduated from the Vancouver Film School. Bruce has starred in several television series, including Lucifer, The Lottery, Motive and Blackstone, for which his performance as Travis earned him critical acclaim. He has also appeared in several movies, including The Memory Book and The Mechanics of Love.

SOPHIA WALKER
Sophia Walker is a Ryerson University Theatre graduate and an award-winning actor. Her recent theatre credits include: Blood Wedding, Jitters and The Heidi Chronicles at Soulpepper; Mary in Mary's Wedding at Blyth Festival; Salima in the Dora-winning Ruined at Obsidian Theatre; Menelaus and Kerthia in Dora-winning The Penelopiad at Nightwood Theatre and Theatre Center's Dora-winning Boblo, a rock -n-roll concert. Walker has spent the last nine seasons performing at The Stratford Shakespeare Festival, where she was part of the Birmingham Conservatory for Classical Theatre. She has a recurring role on the award-winning webseries, Carmilla, and in AMC’s The Divide. Walker also appeared in the film Born to be Blue and the series 12 Monkeys and Rookie Blue.

VLADIMIR ALEXIS
Vladimir Alexis is a Montreal-based actor who had a supporting role in Roland Emmerich’s Stonewall, which premiered at the Toronto International Film Festival. His other film and television credits include X-Men: Apocalypse, Saving Hope, Trauma and Just For Laugh’s Nasty Show. Most recently, he filmed the webseries, Maple Syrup Files, coming out this summer and the forthcoming third season of That’s My DJ, coming out in Spring 2017. Alexis studied in the Cinema-Communications Program at Dawson College, is an alumnus of the Black Theatre Workshop’s Youth Program and the Artist Mentorship, and he is the recipient of the 2016 Gloria Mitchell-Aleong Award.

"Every character starts from you and you have to figure out who that is before you can really be free and without self-awareness."