From cutting edge VR to ad-tech, storytelling and audience engagement tools, startup companies in the IDEABOOST accelerator receive generous support from experienced mentors who encourage, guide and inspire them as they develop and commercialize their products.

IDEABOOST’s fifth cohort just completed its second month of intense product development, and on Friday, June 10, 2016, it put those products to the test in front of an invited audience of industry insiders and potential customers, including representatives from KPMG, CBC, Nike, PWC, TMX, Goodmans, and Edelman. Some of these startup founders are seasoned entrepreneurs, with seed round funding and previous exits under their belt, while some are more green. But as any entrepreneur knows, no matter how experienced you are, there’s always value in getting quality feedback from qualified experts. 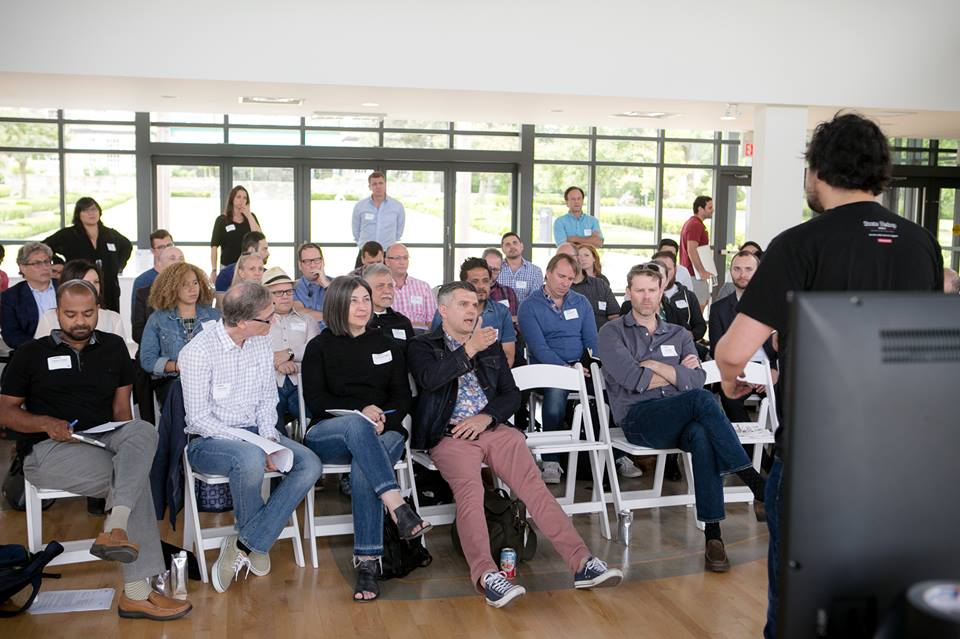 First to take the stage was Repable, an analytics tool that helps advertisers make more informed choices about who to sponsor in the burgeoning world of e-sports.

Most valuable feedback: The representative from Nike highlighted the fact that advertising dollars are allocated by geographic region, so Repable’s analytics need to reflect that. 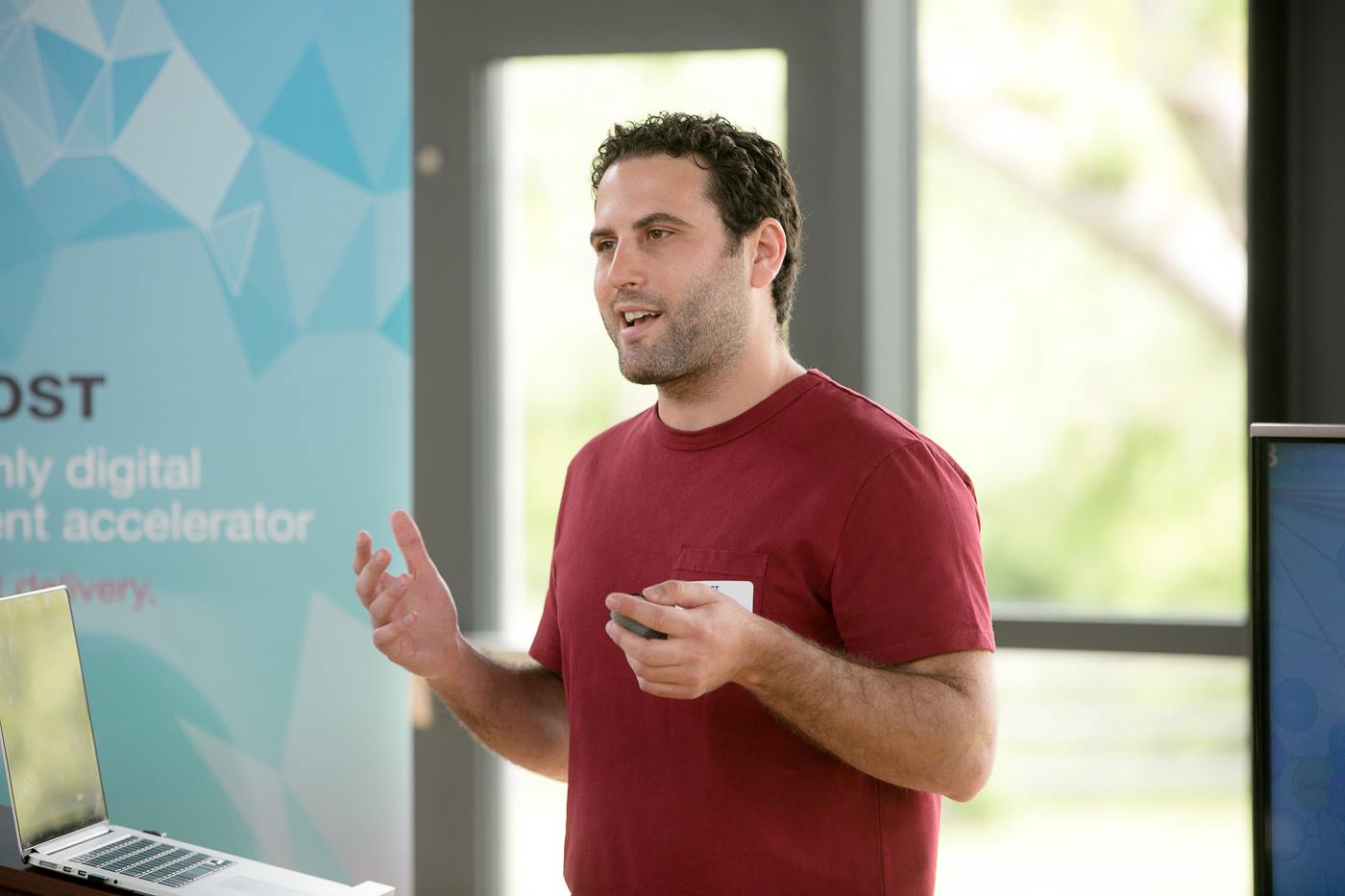 Next up was Big Terminal, a big data company using structured search and customized alerts to deliver relevant financial, media and insurance information.

Most valuable feedback: Say more about the specifics of your particular taxonomy/algorithm so we know how you’re different and better than your competitors. 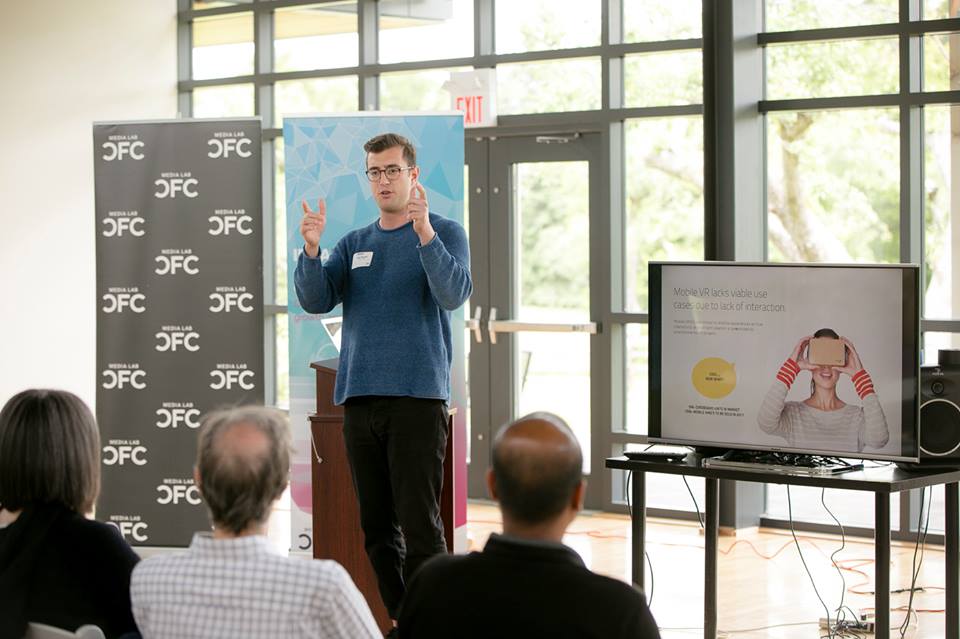 Third up was Pinch VR, a provider of low-cost VR experiences that can be integrated into mail-out brand campaigns.

Most valuable feedback: Address the pain points of the brands you’re hoping to attract and include a live demo. 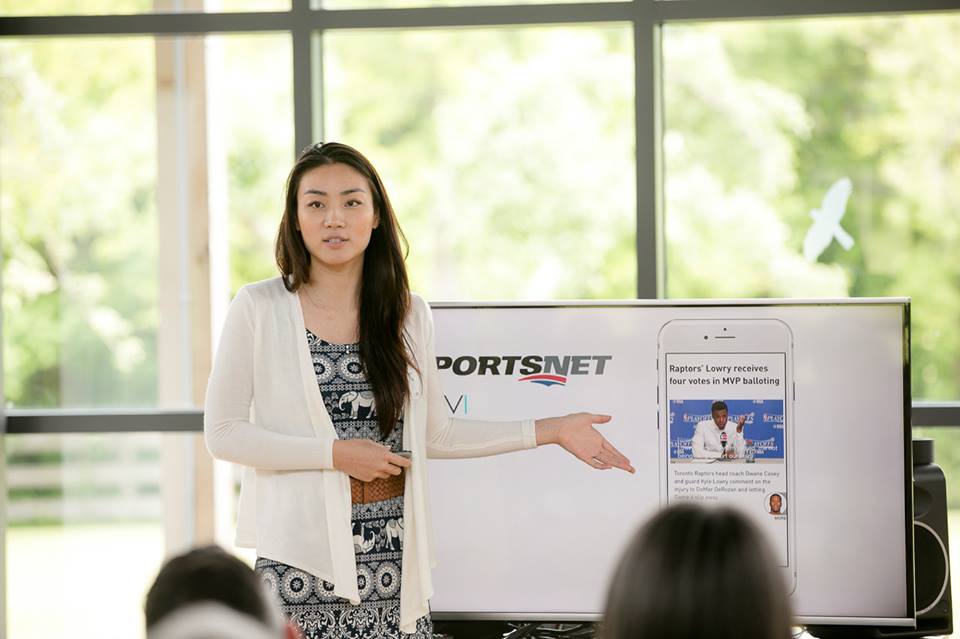 Navi was the fourth company to present, a company which increases the length of time mobile users stay on publishers’ sites.

Most valuable feedback: Statistical claims, such as “Navi increases publishers’ revenues by up to 30 per cent,” need to be verifiable. 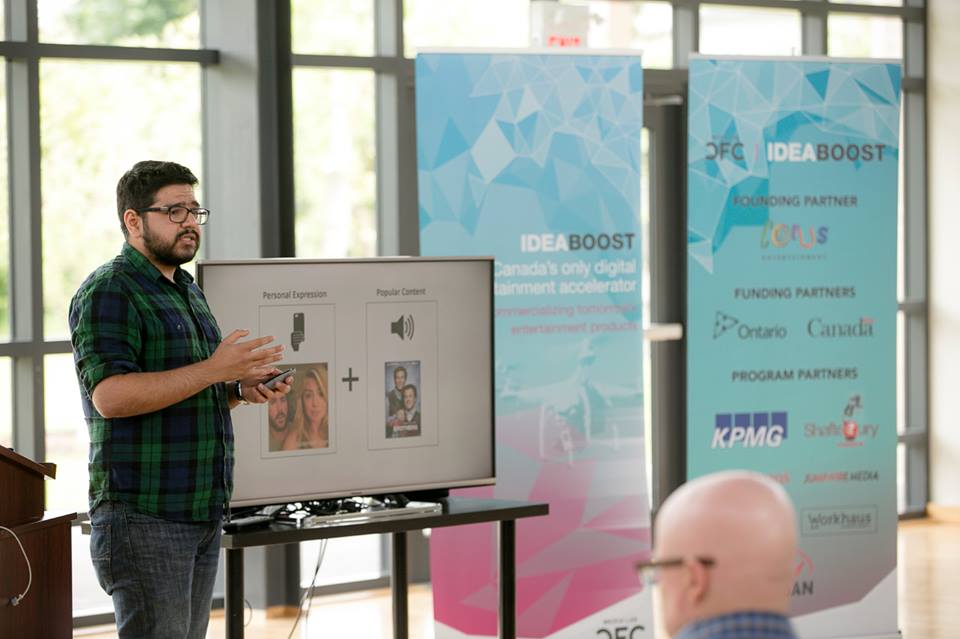 Eigenuity Inc. and their mobile app, Madlipz, were up next. Madlipz enables users to create and share humorous parodies of pre-existing video clips.

Most valuable feedback: How does what you’re measuring in your analytics help you make money? 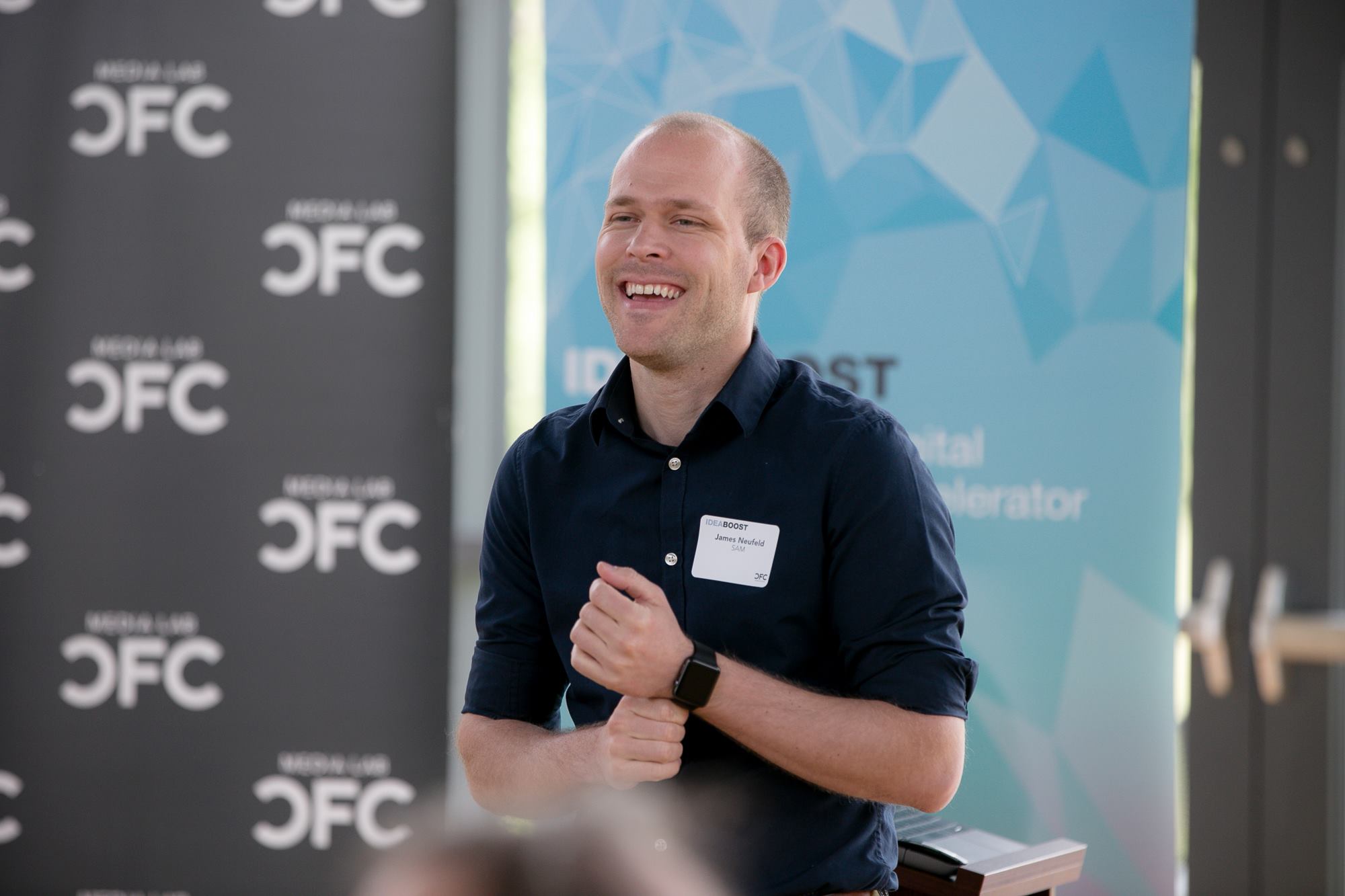 SAM was the final company to present. SAM is a suite of tools that helps the world’s media brands integrate social media sources into their reporting.

Most valuable feedback: Tell us more about what your current customers (which include industry heavy hitters Associated Press and Reuters) say about your product.

The formal pitch sessions were followed by highly focused small group discussions, where each startup was paired with relevant industry insiders, i.e. Navi with media publishers, Madlipz with online content creators. This allowed industry-specific knowledge, that often takes years to accrue, to pass freely from representative buyers to early-stage vendors. 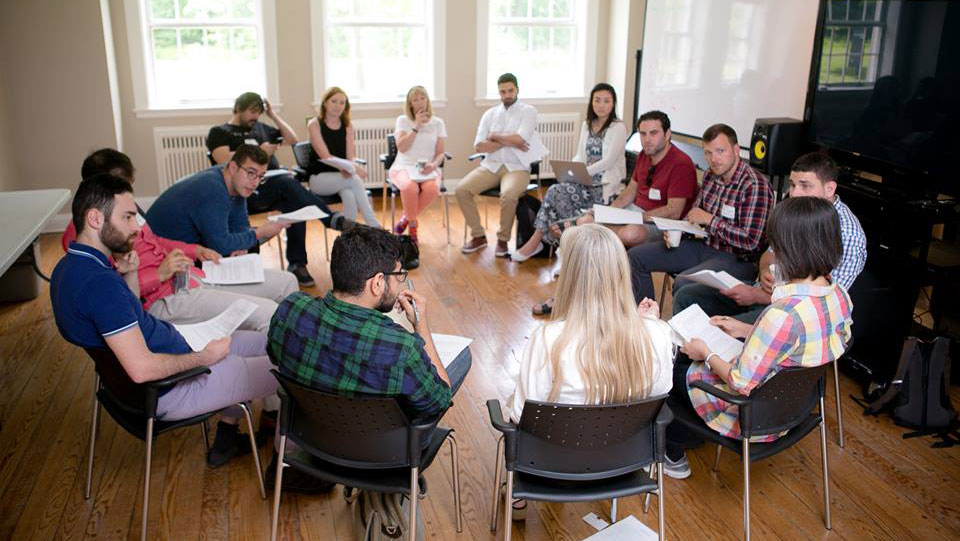 The open, honest feedback from industry veterans is of obvious value to IDEABOOST’s entrepreneurs, but what motivated these busy professionals to give up their Friday afternoon to hear a bunch of early-stage startups pitch their wares?

David Latner of Access Legal, who has been supporting startups for more than 25 years, claims his involvement with IDEABOOST is purely selfish, “I’m exposed to smart people, which is the biggest turn on of all,” he said. “I’m old and decrepit and like being around young people and seeing a whole new fresh way of doing things.”

Dominic Bortolussi of The Working Group, who’s an Executive Advisor for IDEABOOST, echoed this sentiment, “The energy of working with entrepreneurs is infectious.”

Aaron Williamson of CoDesign Lab, a strategy and design company, said, “It’s interesting and different for me [working with CFC]. It’s a different type of process than I normally do … different scope and scale.”

Paul Gardner of Corus Entertainment , a founding partner of IDEABOOST, said “Corus is a large company and this provides us a real window and direct connection in to the entrepreneurial community in areas that are of interest to us.”

Dre Labre of Rethink, a medium-sized independent advertising agency, said “I love seeing the breadth of ideas and talent. The guidance that the CFC is offering is great. I feel honoured to be a part of this awesome group.”

Warren Coughlin, who emceed the event, shared “I enjoy the conversations among the mentors and the energy and creativity of the cohort. I’m always learning something from both those sets. The enthusiasm of the people running their businesses is always inspiring. And what really comes through in all the conversations with mentors is that they really care. They really want these people to succeed.”

The organizer of the event, Amy Davies, Associate Director of CFC Media Lab, was satisfied with how the day unfolded. “The audience in the room raised some really valid points – considerations that the companies hadn’t thought of before.”

Ana Serrano, the head of CFC Media Lab, was similarly pleased, “Today validated once again that IDEABOOST’s surgical approach to mentorship and commercialization is bang-on for startups.” 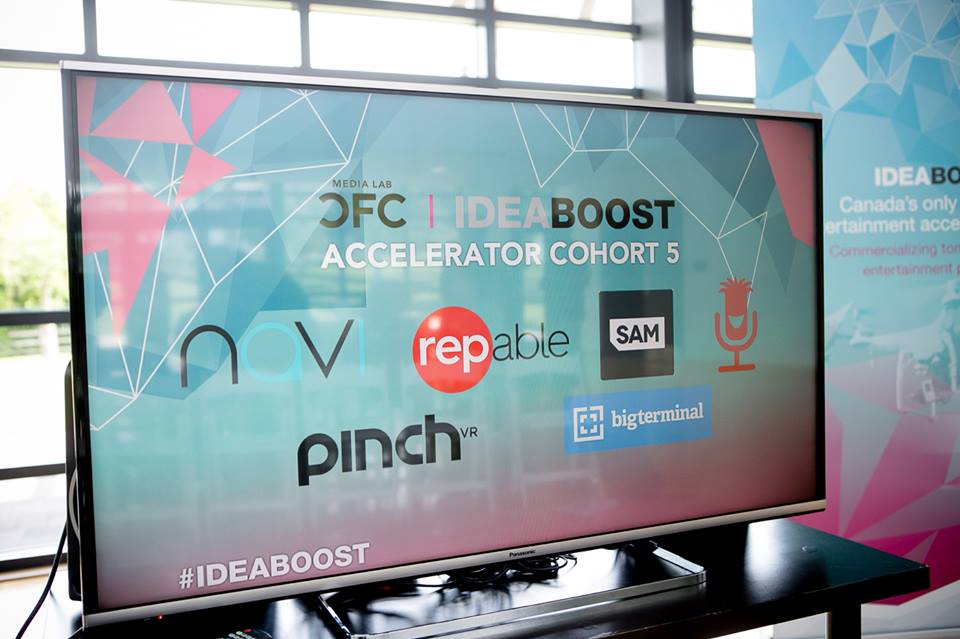 IDEABOOST is CFC Media Lab’s business accelerator and startup community for companies looking to build the next generation of technology-based media entertainment products, services, and brands. IDEABOOST is funded in part by the Federal Economic Development Agency for Southern Ontario.