Anita Lee on the Evolution of the Documentary Landscape 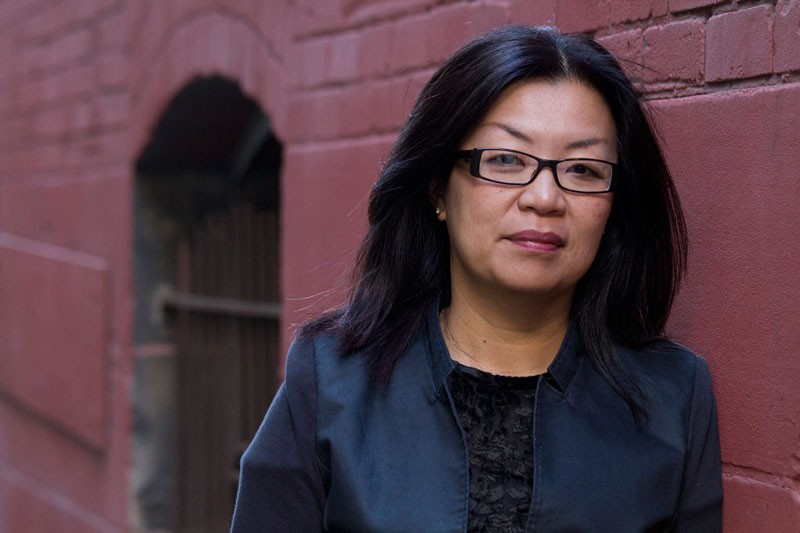 Lee, a CFC alumna, has nearly 20 years of experience in the industry and has a long history with docs and independent film. She is a multi-award-winning producer and currently serves as the Executive Producer, English Program (Ontario Centre) for the National Film Board of Canada (NFB).

As NFB producer from 2005 to the present, Lee has produced some of the most acclaimed and inventive works in recent NFB history, including CFC alumna Sarah Polley’s genre-bending Stories We Tell (developed through the first iteration of the CFC-NFB documentary program), and she lead the NFB's first foray into interactive production as one of the creator/producers of North America's first interactive feature film Late Fragment, in co-production with CFC Media Lab. Some of her past productions include 3D film Let the Daylight Into the Swamp, which premiered at TIFF and was nominated for CSA; Road Movie, a film installation invited to TIFF and Berlin; Tiger Spirit, Donald Brittain Award for Best Social/Political Documentary; The Bodybuilder and I, Hot Docs Best Feature Documentary; and Flicker, Hot Docs Jury Prize for Best Canadian Feature Documentary. Most recently, Lee produced and executive produced the feature doc The Apology, which sees its World Premiere at Hot Docs 2016.

We currently have the pleasure of working with Lee on our NFB/CFC Creative Doc Lab, where she acts as a strategic partner, creative mentor and member of the Lab’s international advisory. We spoke to Anita Lee in the lead up to Hot Docs (running from April 28 to May 8, 2016), about the importance of documentary filmmaking, the current and future doc landscape, and gained insights on what makes a great documentary. Read the full interview below.

CFC: Why do you think documentary filmmaking is important today?

Anita Lee: With the proliferation of reality and factual programming and all its ‎offshoots, the relationship between reality and the notion of truth has become obscure. I like to believe that documentary is still a realm where filmmakers are guided by the principles of seeking and reflecting some kind of truth, as they understand it. We all know life can be stranger than fiction. I often think stories can be truer than facts.

As the world becomes increasingly networked with communication and entertainment industries growing increasingly monolithic, it becomes ever more important that we have access to independent expressions. The documentary form often provides counter storytelling to mainstream media, offering untold stories and unique points of view. 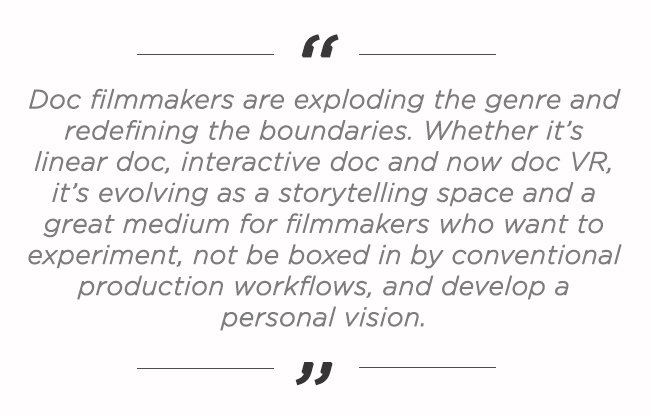 Why would you encourage filmmakers to make documentaries?

I think the documentary, especially what some refer to as the creative documentary, is one of the most exciting art forms in this decade. Doc filmmakers are exploding the genre and redefining the boundaries. Whether it’s linear doc, interactive doc and now doc VR, it’s evolving as a storytelling space and a great medium for filmmakers who want to experiment, not be boxed in by conventional production workflows, and develop a personal vision.

What do you think is the most important thing to consider prior to beginning a documentary?

Why do you want to tell this story? Why you?‎ All documentaries have a POV, though some less or more, or less or more obvious than others. We know even science is not neutral, so documentary certainly isn’t. What is unique about your relationship to the story and what will your POV bring to the conversation?

How do you view the current climate for documentary filmmaking in Canada?

It could be much better. There is so much talent and experience here, and a legacy to be proud of. But we need more stakeholders taking risks ‎and moving out of the industrial model. Outside of formatted TV docs, it’s very difficult for producers to finance feature and interactive docs in Canada. More and more, doc producers need to finance internationally. An interesting new development is Canadian feature docs being financed by American foundations.

What new opportunities are arising within the documentary form?

Ok, I’m making a couple up, but I’m sure someone is creating one somewhere.

Doc VR is ‎a new opportunity. Doc makers are being early adopters of this new platform, heralded to be the most significant media platform for the 21st century. Inclusiveness, access, and diversity are going to be challenges in this space. There are new opportunities for artists at large in VR and I think doc storytellers are essential to bring a critical approach.

What role does creativity play in documentary storytelling?

Every role. There isn’t a role in documentary creation that isn't creative – director, producer, editor, cinematographer, composer etc. Live capture is one component of doc creation and because we work with real subjects, there is this misconception of “documentation”.

No one asks what role creativity plays in dramatic storytelling, although in some instances, some would say, very little. 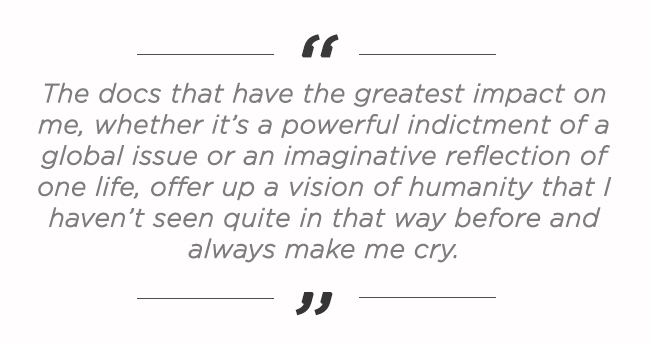 In your opinion, what makes a great documentary?

‎Like any great art, it’s an alchemy of so many things and, therefore, impossible to define. But the docs that have the greatest impact on me, whether it’s a powerful indictment of a global issue or an imaginative reflection of one life, offer up a vision of humanity that I haven’t seen quite in that way before and always make me cry. Either because they allow us to glimpse the human spirit in its highest and lowest moments and/or because they mean as a society we care, and that signals hope.

What is the most important piece of advice that you can give to aspiring documentary filmmakers?

Don’t underestimate your audience. Don’t over explain. Don’t be didactic. Leave some spaces where your audience can step in and make their own meaning. This is when the magic happens. Privilege story over message. The message spreads with deeper roots with a great story. 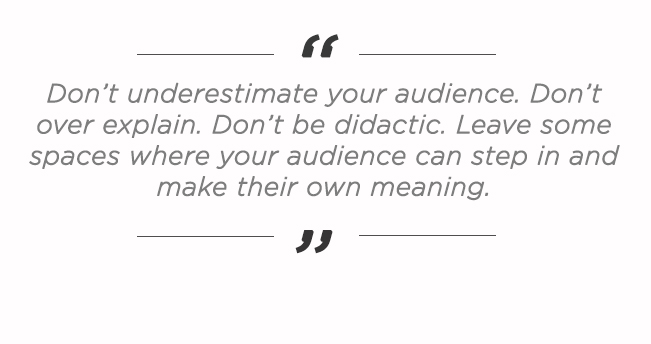